Looking for some creative ways to learn to write the alphabet?  Here are the seven steps I follow when teaching my kids to write their letters. 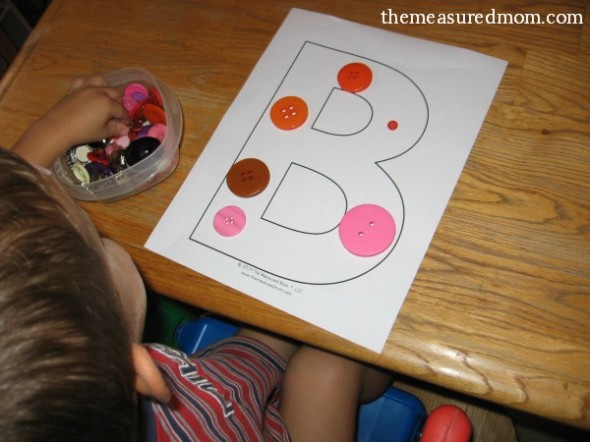 1. Fill a large block letter with objects that begin with the letter’s sound.

What can you fill the letters with?

2. Make the letter using straight or curved objects that you can find around the house.

My Four created this version of the letter B out of Bendaroos.  These are a sort of bendable wax string which are great for forming letters. ( They’re similiar to Wikki Stix.)   After he made this attempt, I showed him a picture of a B and modeled how to make a B without a gap in the middle.

You could also make curved letters out of shoelaces, yarn, ribbon, play dough, or cooked spaghetti.

It’s much easier to find objects to make straight letters.  Make an F our of forks, an E out of envelopes, and an L out of Lincoln Logs.  You get the idea. 🙂

3. Make the letter using small objects without a framework.

This type of activity is still challenging for my Four.  After a few attempts at making a B with blocks, he became very frustrated, so we’ll try again another day.  I made this letter B as an example; creating the curved edges would be something young preschoolers probably would not come up with on their own.

Now that my Five has just started kindergarten, I’ll probably need to fill in the gaps with my own examples here and there. 😉

4. Make the letter by writing with your finger.

Make  a Y in yogurt, an A in applesauce, and a C in coffee grounds.  My Four wrote the letter B in bread crumbs. 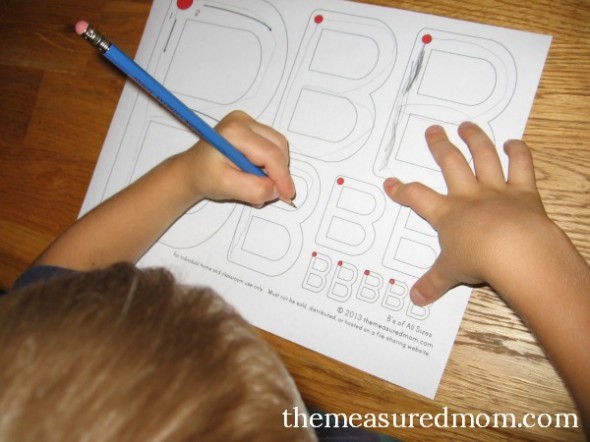 5. Start writing practice with Letters of All Sizes.

I created these beginning handwriting pages as a first step in writing the letters.  Have your child start with the largest letter and work his way down to the smallest.   He may not be ready to do all of the page.  Just doing a few letters is great!   Get the entire uppercase set in this post. (Get lowercase here!)

I created these so my kids could start to write on handwriting lines before they were ready for the standard pages which have small lines and letters.  Get the entire uppercase set in this post. (Get lowercase here.) 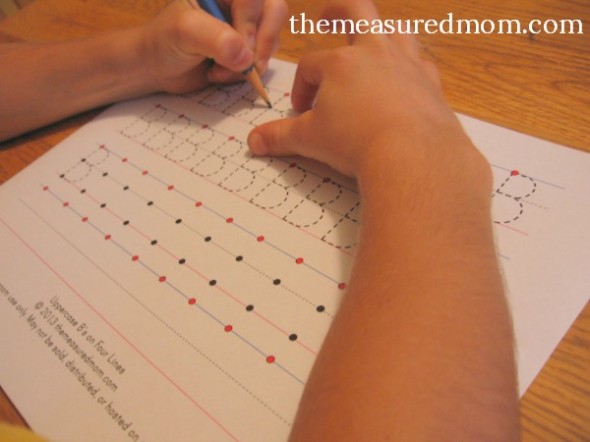 7. Write the letter on four lines.

I use these level three pages for my kids when they are getting close to kindergarten.  Your child might be ready for them sooner or later than my own children.   Get the entire uppercase alphabet set in this post.  (Get lowercase here.)