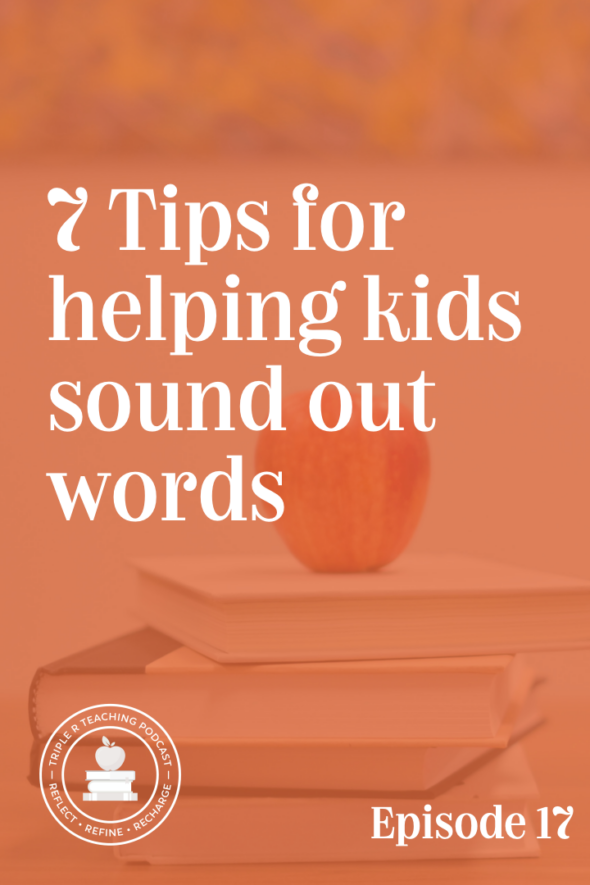 Is “sounding it out” just not clicking for some of your learners? These tips will help!

You are listening to episode 17, Seven Tips for Helping Kids Sound Out Words.

First and foremost is tip number one: You want to make sure that your learners are developmentally ready to sound out words. Way back when I started my blog, I published a post called Five Things Kids Need Before They can Sound it Out. And I wrote that post because I was getting a lot of emails from people who were telling me their learner couldn't sound out words. And I could tell that the child probably wasn't ready. And so, I asked them to go back, look at that post, and make sure all those things were in place first. So, I'll link to that post in the show notes, but these were the things that I talked about. Concepts of print, language and listening skills, letter knowledge, phonological, and phonemic awareness, and an interest in learning to read.

Now, this episode that you're listening to, right now, is in the middle of a podcast series about helping struggling readers. So, if you go back a few episodes, you'll find the ones about teaching letter names and sounds, as well as an episode about building phonemic awareness. So you have some tools that you can go to if your child is not quite ready to sound out words.

Tip number two is from The Literacy Blog, and that is to do lots of oral blending. A lot of times we rush into sounding out words on paper because a child knows letter names and sounds, but we kind of hit a brick wall, and it just doesn't click. So, you can take a step backward and do oral blending. Make sure the letters you choose to work with when you're doing oral blending have sounds that are continuous. So, an example would be the letter M; its sound goes mmmmmm, or the letter S, ssssss. An example of a consonant whose sound is not continuous would be T, /t/, or P, /p/p. They're harder to work with. So start with those words that have consonants that you can drag out, and then start with very simple CVC words, like map, mmmmmaaaaaap, and then put those sounds together. As students become comfortable with that, you can make the words a little more complex by adding a beginning blend, or an ending blend. So, an ending blend example would be the word milk, miiiiilllllll. And then, they put those together quickly to say milk. An example of a word with a beginning blend would be flat, ffffflllllaaaaaat. You say it slow; they squish it together and say it fast.

Tip number three, once your learners have the pre-reading skills they need, and you've done plenty of oral blending, is to try different approaches to sounding out words. And I like to think of three different approaches. One of them is the word family approach, which can be really helpful when you're first starting out. For example, you would teach a child to read AP as -ap, and then you would just keep switching out the first letter: map, cap tap. This can be really good for building the foundation, but as you move on, you're going to want to switch to something else because kids will need to be able to read all the sounds in order when sounding out words.

Some people like to teach individual sounds, so in sounding out the word map, it's /m/ /a/ /p/, map, and that can work for a lot of kids.

But for other kids, by the time they get to the end, they forget the first sound. So they might be able to do, /m/ /a/ /p/ and then they say cat, or something totally unrelated. The reason is because their working memory isn't strong enough. You can help them with that by doing successive blending. And I have a blog post with a free printable, and a video all about this. I'll link to it in the show notes. But, in general, this is how it works, with the word map you would have the child point to the first letter, say its sound, the second letter, say its sound, put the first two together and say the sound, then say the last sound and put it all together. So for example, /m/, /a/, /maaa/, /p/, mmmmmmaaaap, map. Successive blending can help a lot. And, like I said, I have that blog post with the printable to help you out.

This brings me to tip number four, it's a quick one. And that is just to use magnetic letters, letter tiles or, in the instance I was just talking about, letter cards, so kids can manipulate the letters as they say their sounds.

Tip number five is turn this into a game. So, here was an idea from The Literacy Blog. If a child is trying to read the word, mat says the sounds, /m/ /a/ /t/, and then looks at you blankly, or says something completely unrelated, you could turn it into a game where you take those letter tiles, or magnetic letters, and they have to say the sound of a letter for as long as you're pointing to it. This is why you want to use words with continuous sounds, at least at the beginning of the word. So, if you're doing mat and you're pointing to M, they would have to say mmmmmm until you go to the A, and then he switched to aaaaaaa. Then, you can reverse roles, which they will love, but you're going to need a lot of breath for. They point to the letter, you say the sound until they move to the next letter. So, kids enjoy that, it could be fun for you and them, and it helps them get this concept of blending sounds into words.

And, finally, ask for support at home, but you want to make this very easy and doable for parents. So, you could put together a little intervention kit for a family to do at home. It should be very short. I recommend taking no more than 5, possibly 10 minutes, and let it be extremely clear. The best thing to do would be to simply have more examples of activities you're doing at school already, so the child understands what needs to be done. In the show notes for this episode, I'll include a lot of links to resources that I have for helping kids read short words. Those are certainly things you could send home to be done with a parent.

Let's review our seven tips for helping kids sound out words. Number one, make sure they are developmentally ready to sound out words. Number two, do lots of oral blending. Number three, try different approaches to sounding out. So, that could be using word families, sounding out letter by letter, or using successive blending. Number four, use magnetic letters, letter tiles, or letter cards, so kids can manipulate the letters as they say their sounds. Number five, make it fun by turning it into a game. Number six, do more than sound out the word. So, after they've sounded it out, build the word, or write the word. And, finally, ask for support at home by sending home easy games parents can do with kids, or simply an extension, or repetition of the same things you're doing at school. And make these things very easy to use. Just pop them in a manila envelope with a clear set of directions. And they should only take 5 to 10 minutes a day.

That's all for today. I invite you to check out the rest of the episodes in our series about teaching struggling readers. To find everything I mentioned today look in the show notes, which you can find at themeasuredmom.com/episode 17. Thanks for listening. And I'll talk to you again soon.

Resources and links mentioned in this episode

There are many ways to listen …

Looking for the entire podcast library?