My kids love doing our Letter of the Week crafts.  We usually wait until my Six is home from kindergarten so that she can join her two and four-year-old brothers for some fun at the kitchen table.  Since I have three kids (plus a toddler), it’s rare for each child to do every craft – but if they’re feeling especially crafty during a certain week, they just might!

I’ll admit that this letter had me stumped, but after a few days of thought and a lot of time on Pinterest, we found eight crafts for Letter V. 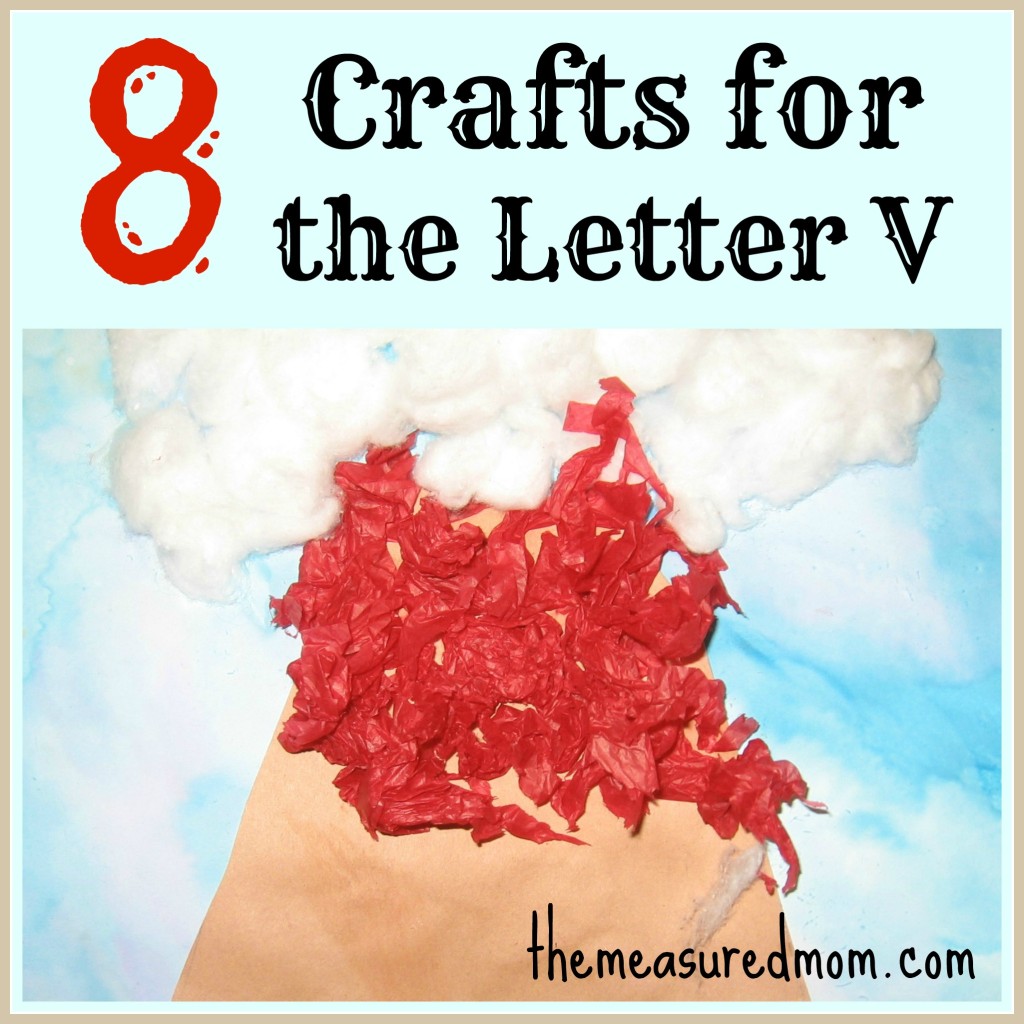 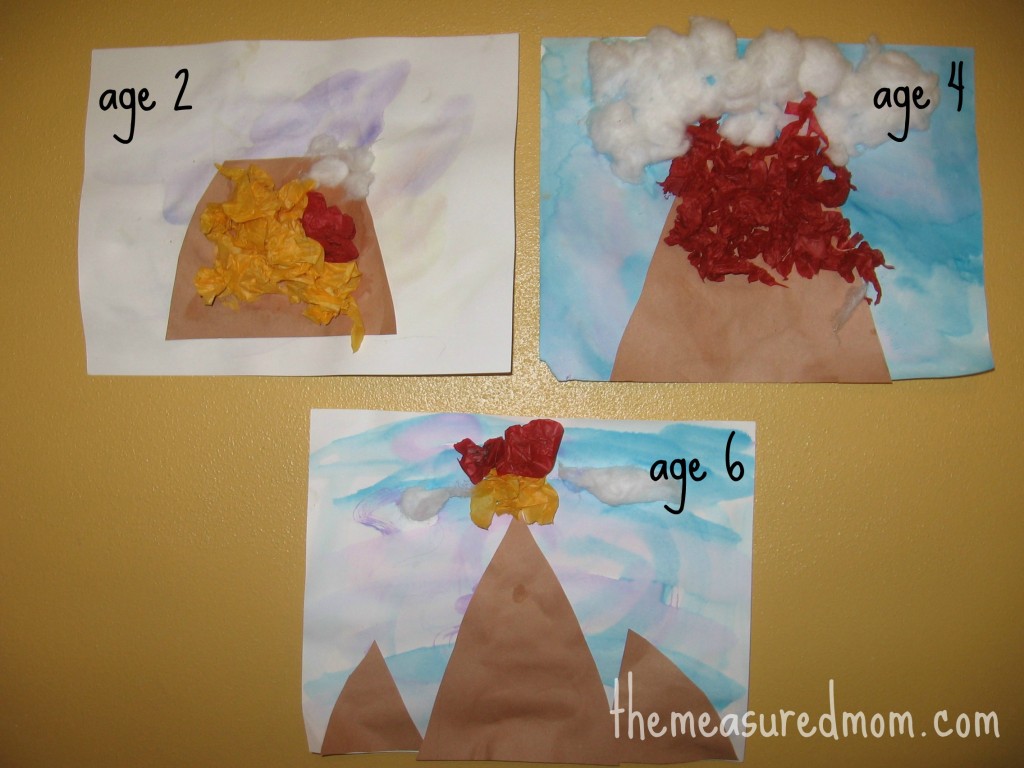 I am starting with my favorite craft, which I found at Cindy DeRosier: My Creative Life. I love it because not only does it reinforce the letter, but it is truly an art project which allowed the kids to bring their own creativity and style.  First they painted the background with watercolors.  The next day they added their volcanoes (I cut them for my Two and Four).  Then they added tissue paper and smoke.  Check out Cindy’s blog for more about this craft, and be sure to check out her Children’s Crafts from A-Z — great stuff! 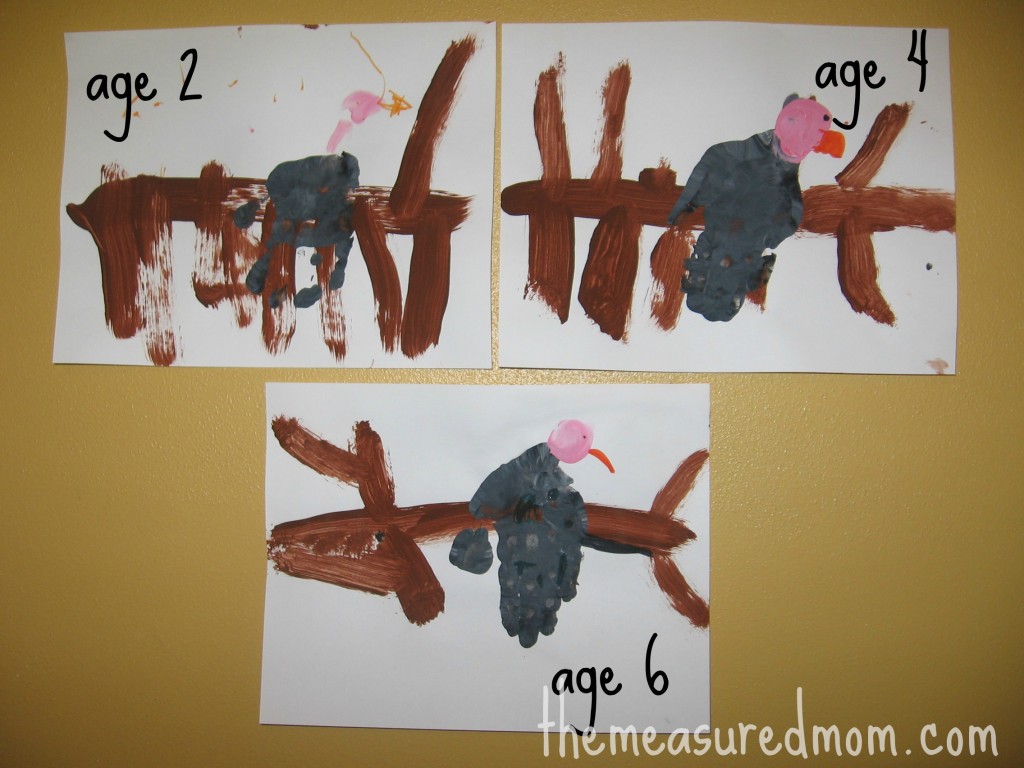 I never would have guessed there could be a cute vulture craft, but Melissa over at Creativity Takes Flight has a great one!  As you can see, the kids painted the branch, used their handprints for the vultures’ bodies, added a thumb print head (and swirled the paint a bit — they have tiny thumbs!).  The next day they added the beak and eye.  I love these!

V is for Vase 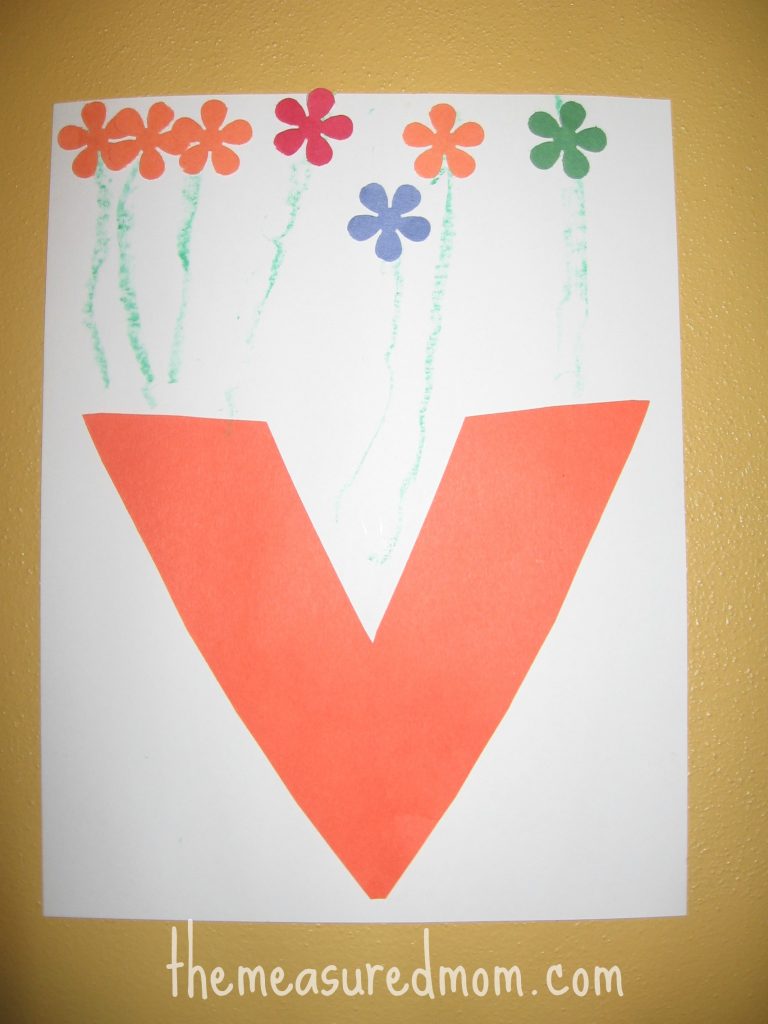 While the older kids were having fun together, my Two came into the kitchen and told me he wanted to do a craft.  So he glued this giant letter V to his paper and used a crayon to draw the stems.  (His green marker was the preferred choice, but earlier this week it fell victim to my One, who bites the tips off stray markers.  Ugh.)  We used a paper punch to make the flowers.  Easy! 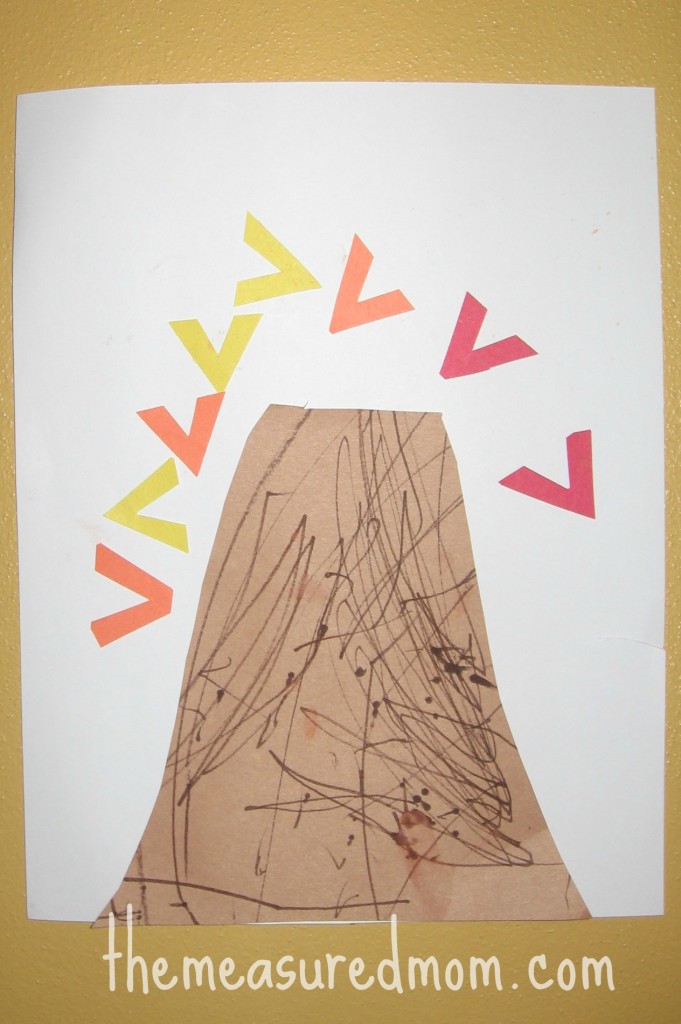 My One (15 months) did this craft sitting on my lap.  I gave him a piece of brown paper and a brown marker, and he went to town drawing and dotting the paper.  The marker went close to his mouth a few times — that’s why this was an on-Mommy’s-lap craft!  I cut out the volcano, applied the glue, and helped him stick it down.  He loved patting down the V’s that I gave him.  The point of this craft was not to teach my One the letter V.  At this point I’m just trying to get him to listen to board books without tossing them!   But it was fun to give him some one-on-one time, and he loves doing crafts with me.  I saw this idea at The Ramblings of a Crazy Woman.

V is for Vegetable Collage 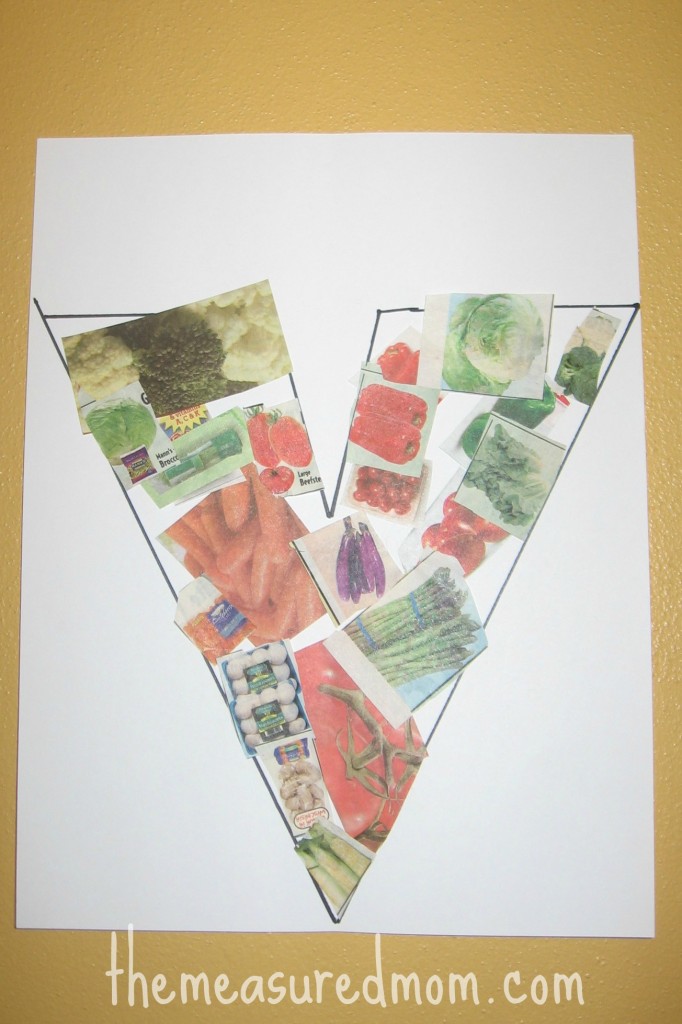 Here’s a super easy craft for letter V.  Get out your grocery store ads and work with your little one to make a vegetable collage on a letter V.

V on a Vine 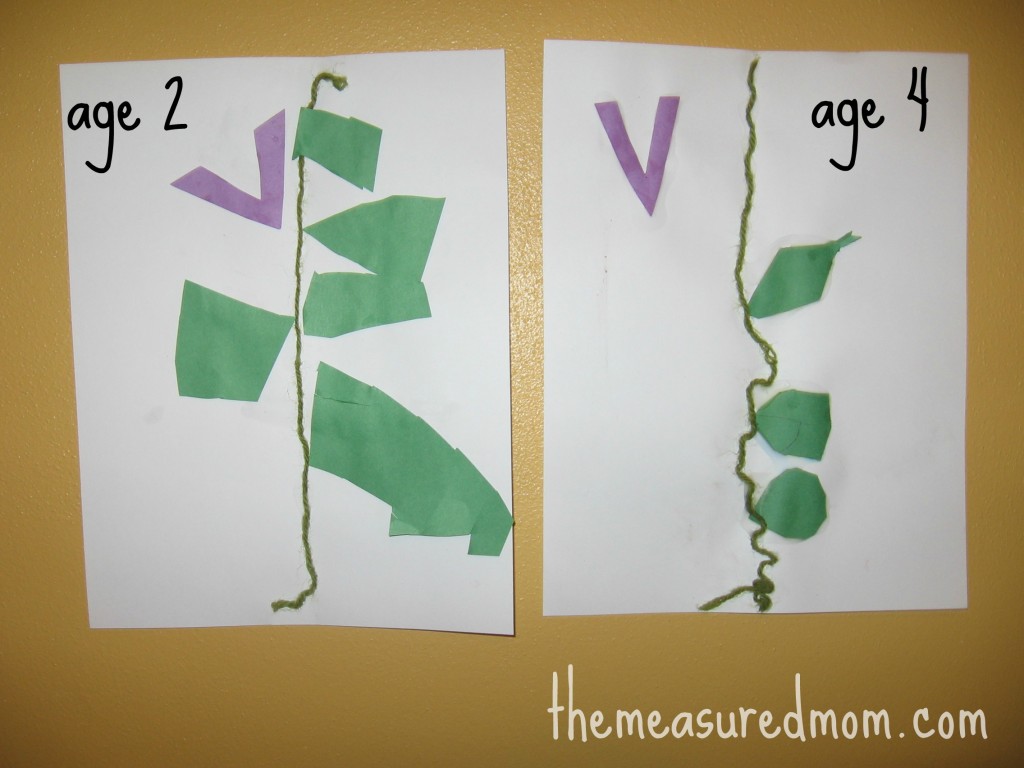 Here’s a  simple craft from Preschool Playbook. You just need some green yarn and some construction paper.  My boys did their own leaf cutting; I supplied the letter V’s. 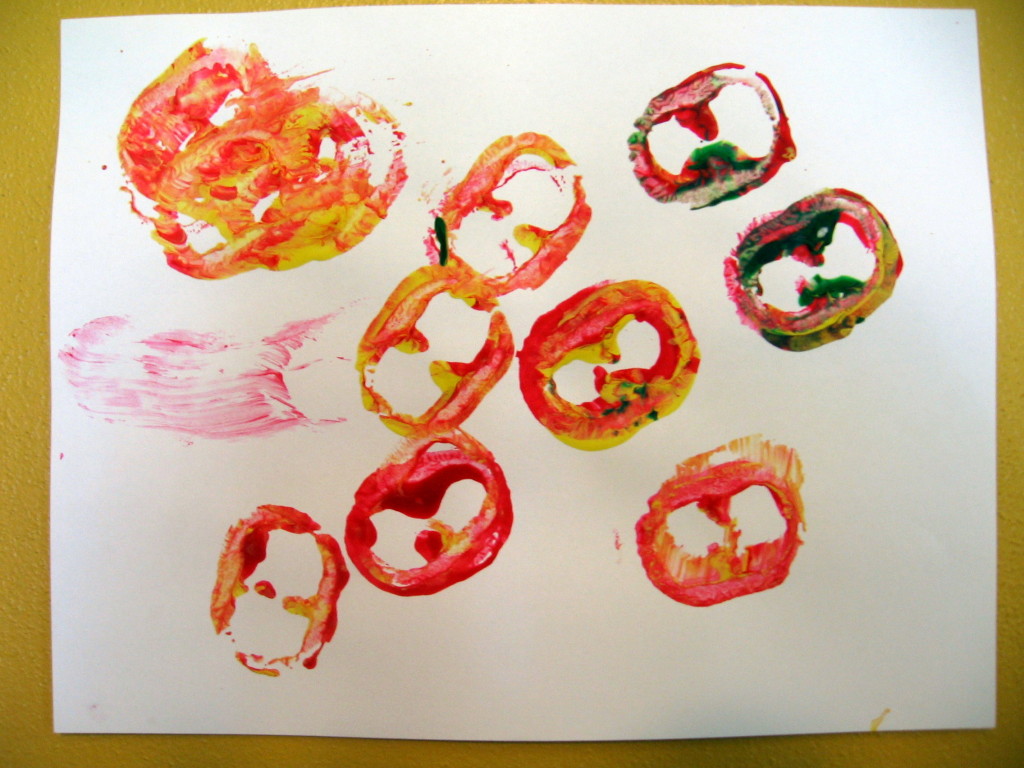 My Two used peppers and a potato to make this vegetable print. Broccoli and cauliflower work really well, too! 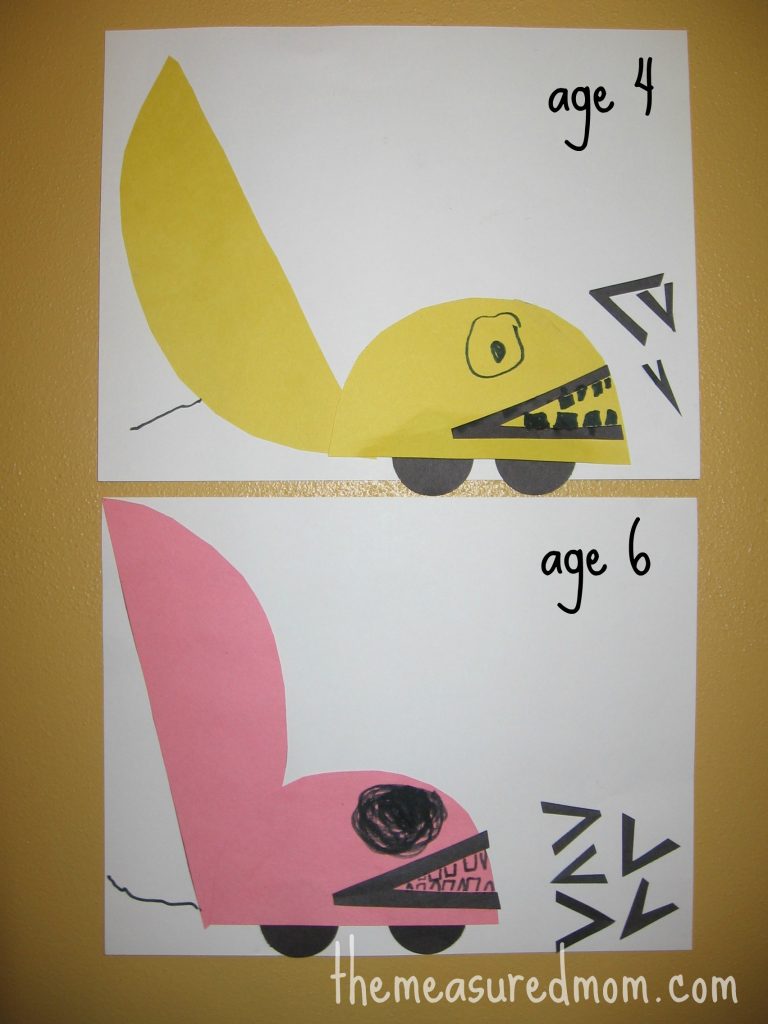 I never know which craft my kids will love the most, and I was really surprised when my Four and Six had so much fun with this one. Designing original crafts is not my strong suit, but I did come up with this one myself.

I know, it’s a little goofy.  I mean, really – a vacuum craft? But this is the letter V, people.  There isn’t much to choose from.  Anyway, you can see that the vacuums had V’s for their mouths and were vacuuming up the V’s off the floor.  My kids just loved drawing the faces on their machines.  Later they cut around the edges and pretended to vacuum the floor.  Fun stuff.

You’ll find many more learning ideas for letter V by clicking on the image below: 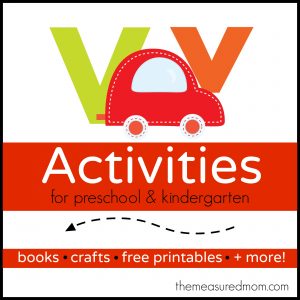