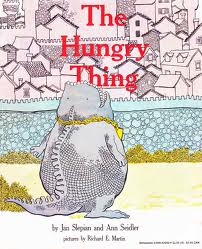 The Hungry Thing, by Jane Slepian and Ann Seidler

This book and its sequel (The Hungry Thing Returns) are the perfect books to teach rhyming to older children.  A hungry monster visits a town (a school in the second book), but when making requests he speaks in rhyme.   What does he mean by “flamburgers?”  What is “crackeroni and sneeze?”  These books are real treasures but can be hard to find — check your library.

And to Think That I Saw it on Mulberry Street, by Dr. Seuss

This, the first book Dr. Seuss published,  is about an imaginative boy named Marco.  With great exaggeration, Marco describes what he sees and hears along Mulberry Street. On each page he turns the ordinary man and wagon into something even more outlandish. 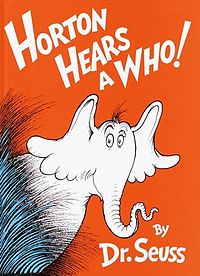 Horton the elephant hears a small sound from a speck of dust, which turns out to be a tiny community called Whoville.  Horton takes it on himself to protect the Whos because “a person’s a person, no matter how small.”  You might appreciate checking this book out from the library from time to time instead of owning it; it is very long.  An audio version with Dustin Hoffman as narrator is wonderful to listen to in the car.

Bear Snores On, by Karma Wilson

This and the other books in the series are made even better by Jane Chapman’s endearing illustrations.  In the first book, many animals and birds get out of the cold and into Bear’s warm cave.  As they brew tea and pop corn, Bear snores on.  When he wakes up to find his friends having fun without him, Bear is distraught: “You’ve snuck in my lair, and you’ve all had fun.  But me? I was sleeping… and I have had none!” 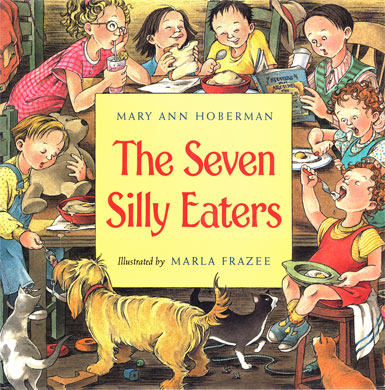 Mary Ann Hoberman is the author of many rhyming children’s books including the You read to Me, I’ll Read to You series.  In this book Mrs. Peters has seven children — each of whom will eat (or drink) only one particular food.  Poor Mrs. Peters is worn to the bone cooking homemade oatmeal, baking homemade bread, squeezing lemons for lemonade and peeling apples for applesauce.  At the end of the book the family discovers a recipe that everyone will eat.

This and the other Miss Spider  books are bright, fun stories suited for older children because of their higher vocabulary and clever word play.  In this first book, Mrs. Spider is devastated when none of the insects she’s invited will come to her beautiful tea party.  When a drenched moth is forced to stop by, he learns that Mrs. Spider is a herbivore, and she soon becomes a friend of all the bugs.

The Sneetches, by Dr. Seuss

This is another lengthy rhyming book from Dr. Seuss – but this is one I don’t mind reading a few extra times.  The Sneetches are yellow creatures, some of whom who discriminate against those who don’t have stars on their bellies.  When a stranger comes to town and makes money off the haughty Sneetches, they finally learn their lesson and don’t judge each other by whether or not “they  have stars upon thars.”

There’s a Wocket in My Pocket, by Dr. Seuss

This book lends itself to a lot of fun rhyming practice.  The narrator rhymes nonsense words with real words by naming all the strange creatures in the house — the nupboard in the cupboard, the ghairs beneath the stairs, and the bofa on the sofa. 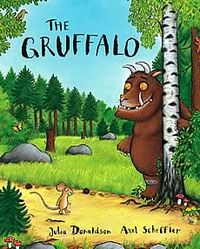 The Gruffalo, by Julia Donaldson and Ariel Scheffler

A clever mouse outwits a hungry fox, owl, and snake by warning them of a ferocious beast whose favorite foods are roasted fox, owl ice cream, and scrambled snake.  When it turns out that the Gruffalo really does exist, the mouse has one more creature to outsmart.

Kermit the Hermit, by Bill Peet

Kermit is a hermit crab who stores all the junk he finds in his cave. One day he is rescued from a dog by a boy in ragged clothes.  Kermit wants to thank the boy, so when he finds a treasure of gold, he slowly accumulates it until he must move his hoard out of his cave.  A pelican helps him deliver it down the chimney of the boy’s ramshackle home. The boy’s family becomes rich, and Kermit learns to think of others first. 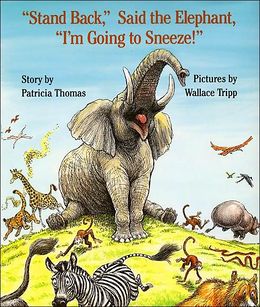 “Stand Back,” Said the Elephant, “I’m Going to Sneeze!”, by Patricia Thomas

The elephant warns the other animals about a tremendous sneeze on its way.  The sneeze would blow the stripes off the zebra, the monkeys out of the trees, and the hippopotamus onto his bottamus.  As all the animals plead with the elephant not to sneeze, he laughs instead.  Young children will laugh along with him.

“I Can’t” Said the Ant, by Polly Cameron

The Caboose Who Got Loose, by Bill Peet

Katy Caboose is unhappy with her dirty, jostling life at the end of the train but finds happiness at the end of this action-filled story when her rusty bolts break apart from the train.   Anyone who thinks rhyming books  must be simple has never read Bill Peet.  “The next thing she knew she was jerked and then jolted, then hitched to the train with her coupler bolted…”