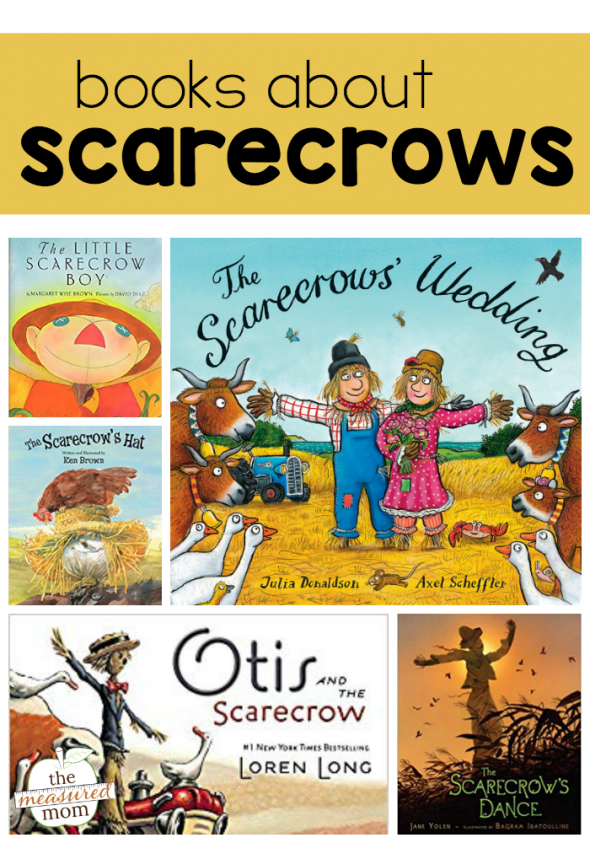 Looking for some fun fall-themed read alouds? Check out my list of books about scarecrows! 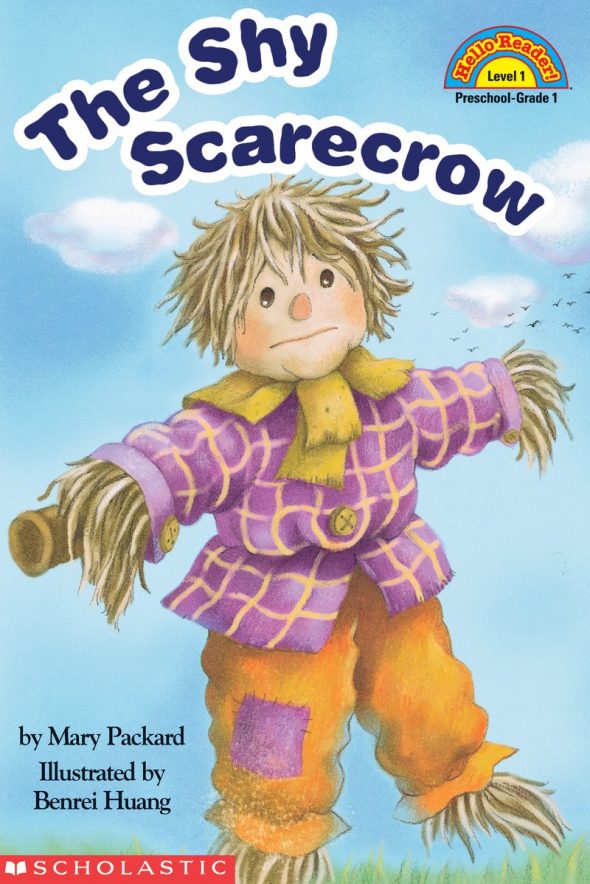 The Shy Scarecrow, by Mary Packard

This is a sweet and simple early reader book about a scarecrow who feels he’s too shy to do his job. When the farmer gives him a loud hat made of tin and cans, he finally frightens the crows away.

The illustrations are beautiful, and I enjoyed the meditative story about the essence of a scarecrow.

The scarecrow doesn’t care what he is made of or how long he might last, for has been a witness to life. The earth has rained and snowed and blossomed and wilted and yellowed and greened and vined itself all around him.

As you can see, the book reads more like a sentimental poem more than a story. I enjoyed it; my preschooler didn’t.

This is a simple nonfiction book from the wonderful series, Pebble Plus. This is a good nonfiction read aloud for very young listeners, and a great book for young readers to read all on their own. There’s nothing spectacular in the story itself, but it’s hard to find nonfiction books about scarecrows. 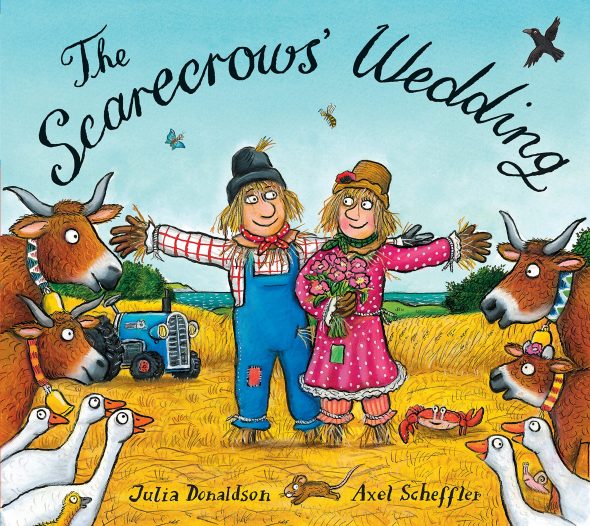 The Scarecrows’ Wedding, by Julia Donaldson

Both my Four and I loved this book, and I read it countless times. It was created by the team that brought us The Gruffalo and The Room on the Broom (both wonderful books as well!).

The Scarecrow’s Wedding is the rhyming tale of Betty O’Barley and Harry O’Hay, two scarecrows who decide to get married. As they search for the things they need for “the best wedding yet, a wedding that no one will ever forget,” Harry is delayed for several days. A new scarecrow takes his place – Reginald Rake (aptly named). When he tries to charm Betty, she sees right through him – and Harry saves the day.

Note: At one point in the book Reginald brags about how he can blow big smoke rings and pulls out a cigar. Not to worry – Betty admonishes him immediately. But if that bothers you, this may not be the book for you. 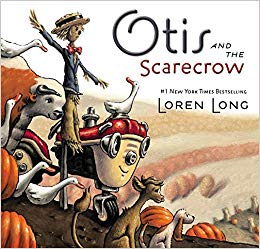 Otis and the Scarecrow, by Loren Long

If you have never read an Otis book to your listeners, you need to log in to your library’s website and reserve some right away. The illustrations are stunning, and the stories are beautiful.

Otis is a friendly little tractor who is always looking out for the other creatures on the farm. When the farmer brings a scarecrow to the corn field, the other animals try to be his friend. But the scarecrow’s frown never leaves his face. The other creatures leave him alone … until a cold rain leaves the scarecrow looking more forlorn than ever. Kind Otis leads the way as the animals join him in the wind and rain. A wonderful story about showing kindness to others! 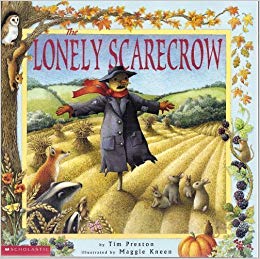 The Lonely Scarecrow, by Tim Preston

The scarecrow longs for a friend, but the creatures of the field are afraid of his appearance. When winter comes, the scarecrow is covered in snow and becomes a snowman. The animals are no longer afraid of him, and they happily tumble around him. When spring comes, they realize that their friend the snowman was the scarecrow all along. This would be a great book to read during a unit about friendship. 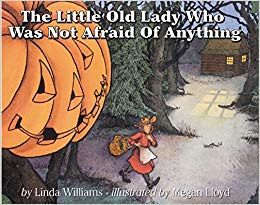 The Little Old Lady Who Was Not Afraid of Anything, by Linda Williams

This book has been a Halloween favorite since it was first published over thirty years ago. A little old lady goes for a walk and is followed by two big shoes. But the fearless old woman isn’t frightened one bit. “Get out of my way, you two big shoes! I’m not afraid of you!” Eventually a pair of pants, shirt, gloves, hat, and scary pumpkin head join the chase. When the pumpkin head declares that they’ve come to scare her, the fearless old lady makes a scarecrow. 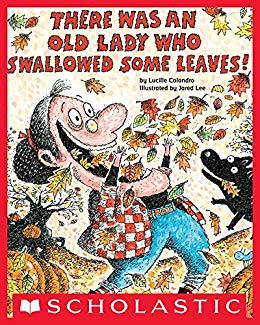 There Was an Old Lady Who Swallowed Some Leaves! by Lucille Colandro

This is such a silly series, but the books are a lot of fun.  In this one, the old lady swallows some leaves (perhaps she’ll sneeze).  She swallows leave, a pole, a jacket, and more… and she finally sneezes up a scarecrow!

The Scarecrow’s Hat, by Ken Brown

Truthfully, this book has very little to do with a scarecrow, but it’s such a great story. Chicken admires Scarecrow’s hat. But in reply, he says, “I’d rather have a walking stick.” Chicken doesn’t have a walking stick to trade, but she knows someone who does. The day is filled with bartering and trading, until Chicken finally acquires a walking stick for the scarecrow – and she gets the hat for herself! Beautiful pictures and a fun story. 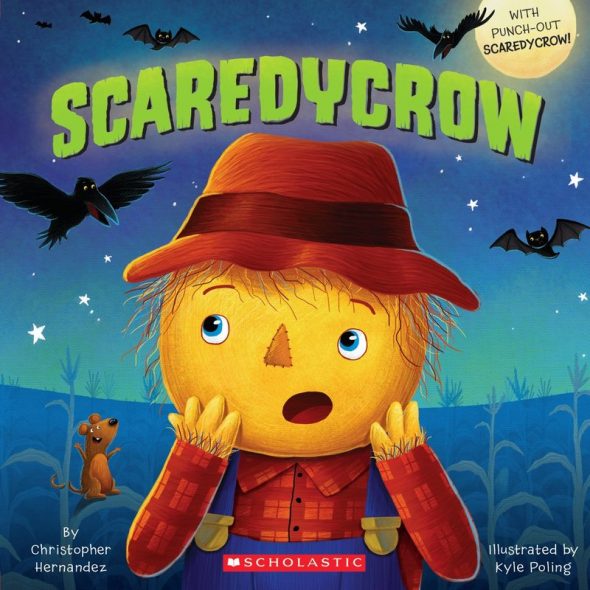 While I wouldn’t call this an amazing piece of literature, it’s a cute little book about a scarecrow who is afraid of bats and crows. Little does he know, his shrieking scares them away. In the end, he makes friends with all the creatures on the farm.

The Scarecrow’s Dance, by Jane Yolen

I actually didn’t even read this book to my preschooler because I knew she wouldn’t like it; it’s too meditative for her. It reads more like a poem than a story – not that this is a bad thing, but I’ve learned that her patience only extends so far. 🙂

In the book, a scarecrow leaves his post and overhears the farmer’s young boy praying for the scarecrow. Realizing that he has an important job, the scarecrow exchanges his freedom for his role as guardian of the field. The illustrations are beautiful, but I feel that the pictures and story are a better fit for early elementary listeners than for preschoolers.

This book, written by the author of the classics Goodnight Moon and Runaway Bunny, is about a little scarecrow boy who is anxious to join his father in the corn field. But every day his father tells him, “No, little boy, you can’t go. You’re not fierce enough yet  to scare a crow.”

One morning the little scarecrow boy sneaks out of the house to face the crows himself – but it’s harder than he’d imagined!  I find the scarecrow expressions a little creepy, but it’s a fun book.