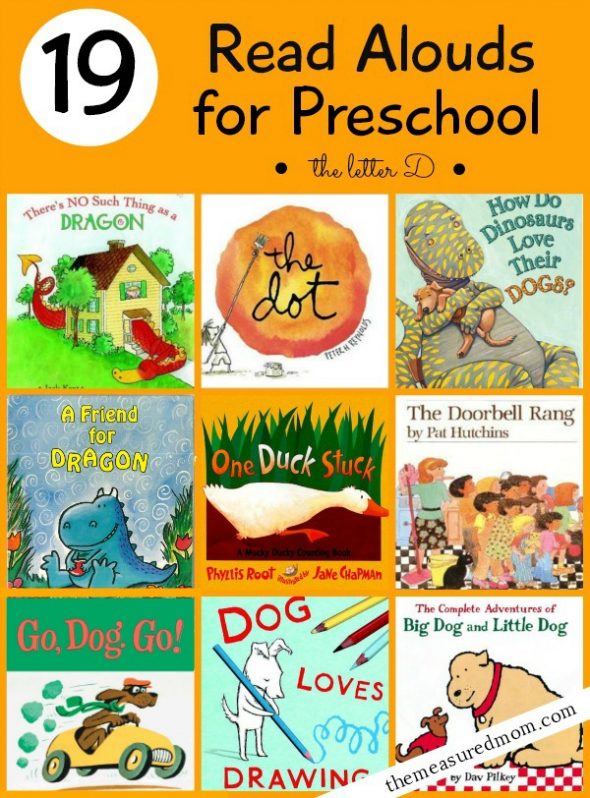 With dogs, dragons, dinosaurs, and more — we had no trouble putting together a big list of great letter D books for preschoolers! 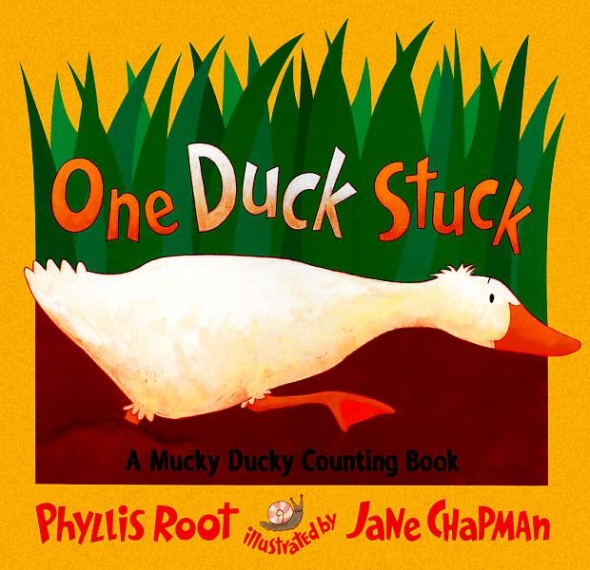 One Duck Stuck, by Phyllis Root

My Two and Four couldn’t get enough of this rhythmic rhyming book.  “Down by the marsh, by the sleepy, slimy marsh, one duck gets stuck in the muck.  Who can help?”

As each group of animals comes by to help (from two fish all the way up to ten dragonflies), there’s “no luck.  The duck stays stuck in the muck.”  But when all the animals work together… “Spluck!”

The Doorbell Rang, by Pat Hutchins

I was surprised how much my Two and Four requested this classic picture book; both were disappointed when I returned it to the library.  Two children are given a plate of cookies to share.  Each time the doorbell rings, more children join them, and their share of cookies becomes smaller and smaller.  Thankfully the last ring brings Grandma, who’s brought a giant platter of fresh cookies!

The Dot, by Peter Reynolds

This is such a wonderful story!  Vashti is like many children; she feels defeated before art class even begins because she  believes she cannot draw.  When at her teacher’s request she draws just a single dot, her teacher frames it and puts it above her desk.  Emboldened, Vashti begins to create colorful works of art – all featuring dots.  I love the ending.  Recommended! 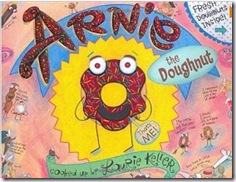 Arnie the Doughnut, by Laurie Keller

This book is absolutely hilarious, and you will enjoy it as much as your kids.  I recommend it for older preschoolers all the way through early elementary.  Any Laurie Keller book is a big winner at our house!

Arnie is a doughnut who was just baked this morning. He can’t wait to see what happens when Mr. Bing takes him home.  Then he learns that Mr. Bing plans to eat him!  Arnie is horrified to learn that the other doughnuts have no problem with this.  “We’re very popular!  We’re delicious!”

Mr. Bing and Arnie agree to come up with something that Mr. Bing can do with  him that does not involve eating him.  Could Arnie be a personal fitness trainer, dance partner, or chauffeur?  No, Mr. Bing doesn’t need those things.  How about using Arnie as a pincushion, a car air freshener, or a doorstop?  None of these work either.  We love what they decide on!

This is just one of those books that you have to get from your library.  Be prepared to sit with your child a long time and read all the funny dialogue in the margins.

This is a treasure of a book about a dog who receives a sketchbook and begins to draw.  As he doodles, his drawings come to life.  Fun illustrations accompany this creative story.

Delores is a well-meaning but loud little girl who tries to win over her new pat cat, Duncan. Delores’ exuberance and determination to play only lead Duncan to hide, and  Delores is disappointed when the cat prefers her quiet big sister.  Finally, when Delores decides to ignore the cat, he is intrigued and becomes her friend.

Doris is a beaver who doesn’t know how to draw like her classmates. When it’s time to draw a dinosaur, she draws a big blue swirl.  Doris is discouraged until the class visits the art museum and she sees the modern art display, featuring works of art just like hers.

This book is part of the Yoko & Friends School Days series, which I adore.  Rosemary Wells knows how to write simple but wonderful stories that kids can relate to!

How Droofus the Dragon Loses His Head, by Bill Peet

Like all of Bill Peet’s picture books, this is a long one, but it’s been a favorite at our house for a long time.  Droofus the Dragon is a kind-hearted creature whose wing is damaged and can no longer fly.  He finally finds a home at a farm, where he moves giant boulders out of the farmyard for a poor farmer and plows with his giant tail, bringing fortune back to the poor farmer’s family.

Droofus loves his new home… until the king offers a giant reward for a dragon’s head to display on his castle wall.  We love the surprise ending!

There’s no Such Things as a Dragon, by Jack Kent

If you say there’s no such thing, does that mean that thing will disappear?  Not in this book.  Billy’s mother is sure “there is no such thing as a dragon,” even when it eats all the pancakes and grows so big the house comes off its foundation.  As it turns out, the dragon just wants to be noticed.  This is a favorite from my childhood, and my own kids love it too.

The Complete Adventures of Big Dog and Little Dog, by Dav Pilkey

This book is a compilation of a simple series that toddlers and young preschoolers will enjoy.  Nothing too complicated- just Big Dog and Little Dog going for a walk, wearing sweaters, finding a skunk… !

This is a fun rhythmic book about monkeys drumming on drums… with the catchy refrain “Dum ditty dum ditty dum dum dum.”  Fun to read, listen to, and read along!  It’s part of my rhyming books for babies book list, but it’s great fun for older kids too. 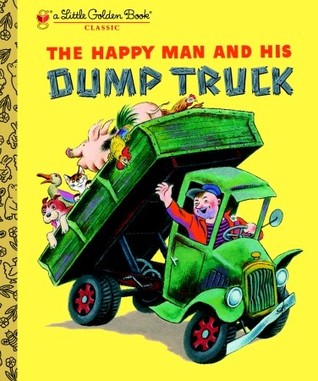 The Happy Man and his Dump Truck, by Miryam Scuffy

This classic Golden Book, published in 1950, doesn’t have much of a plot, but it’s a sweet simple story that kids love.  The happy man waves and tips his dump truck whenever he sees a friend.  When he picks up farm animals for a ride, they enjoy the fun slide down the dumper.  The charming illustrations are the best part.

Most of us are familiar with this classic, still popular over fifty years after it was first published.  The book is an easy reader, but it’s also a fun book to listen to.  Preschoolers enjoy all the busy dogs going, going, going in cars… ending up at a big dog party atop a giant tree. 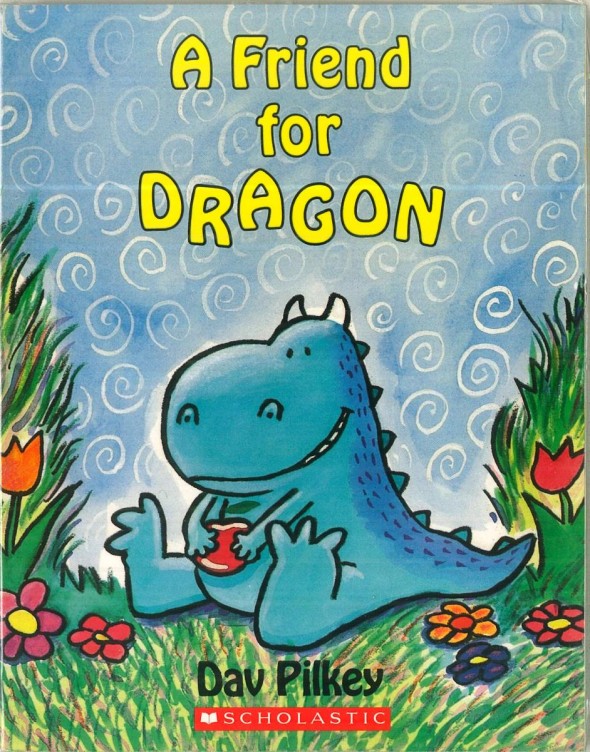 A Friend for Dragon, by Dav Pilkey

This is a book we own and one we’ve enjoyed  many, many times.  Dragon is lonely and longs for a friend.  One day an apple starts talking to him, and Dragon is overjoyed  (unaware that a sly snake is pretending to be the apple).  The apple turns out to be the perfect friend in so many ways – it’s such a great listener!

But when the apple doesn’t speak again, Dragon is concerned and takes him to the doctor’s office.  When Dragon steps out, a hungry walrus eyes his new friend.  You can guess what happens next, but the ending will surprise you!  A dear book that I can’t do justice to in a review; highly recommended!  Be sure to check out the other Dragon books too.  So much fun!

Be Gentle with the Dog, Dear, by Matthew Baek

This is a great story for older toddlers who aren’t exactly gentle with the family pet.  Poor Tap, the family dog, doesn’t like all the abuse – er, love – that he gets from little Elisa.  But after repeated admonitions (“Be gentle with the dog, dear!”) Elisa finally learns how to be kind to her pet.

Goldilocks and the Three Dinosaurs, by Mo Willems

This is another fun book from the creator of the Pigeon series and the Elephant and Piggy books.  Not only do kids love this one, but you’ll appreciate all the little jokes thrown in.  When the dinosaurs set a trap of three giant bowls of chocolate pudding, “a poorly supervised little girl named Goldilocks came along.”   Goldilocks is clueless that she has just fallen into a trap until she hears the dinosaurs talking about their catch.  “Goldilocks took a minute to stop and think, which was longer than she was used to stopping and thinking.” 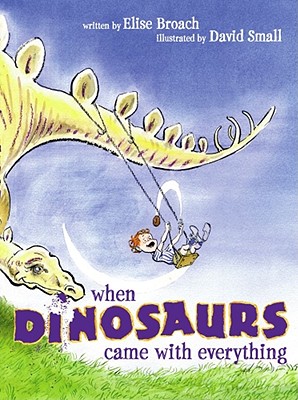 When Dinosaurs Came with Everything, by Elise Broach

When we put together a book list of funny dinosaur books, this was my favorite.  What if you bought a dozen donuts – and got a dinosaur?  What if every time you got a haircut – instead of getting a balloon, you took home a dinosaur?  This is a hilarious story with fabulous illustrations.

How Do Dinosaurs Love Their Dogs? by Jane Yolen

I have loved every book in the “How Do Dinosaurs” series, written by Jane Yolen and illustrated by the amazing Mark Teague.  Each book starts with a dinosaur doing all the wrong things, whether that’s throwing a tantrum at bedtime (in How Do Dinosaurs Say Good Night?) or never taking his dog outside.  Each book ends with all the right things that dinosaurs do. Of course these are all lessons for small children, taught in an entertaining and endearing way.

This is such a gem of a book, published just a few years ago.  A fun rhyming passage accompanies the big colorful picture on each page.  “I’m a little dump truck hauling stones and rocks; bumping, bouncing, thumping, crossing city blocks.”  My vehicle-loving Two can’t get enough of this one!