It’s time for another letter of the week book list!  Our list is short because we picked only the best books to read for letter Z.  Feel free to try a few others, like Dr. Seuss’ On Beyond Zebra (which is actually not about zebras) and If I Ran the Zoo… but those are some of Seuss’s loooong rhyming books that test the patience of preschoolers and parents alike — at least at our house!

I only share books I love… and here they are! 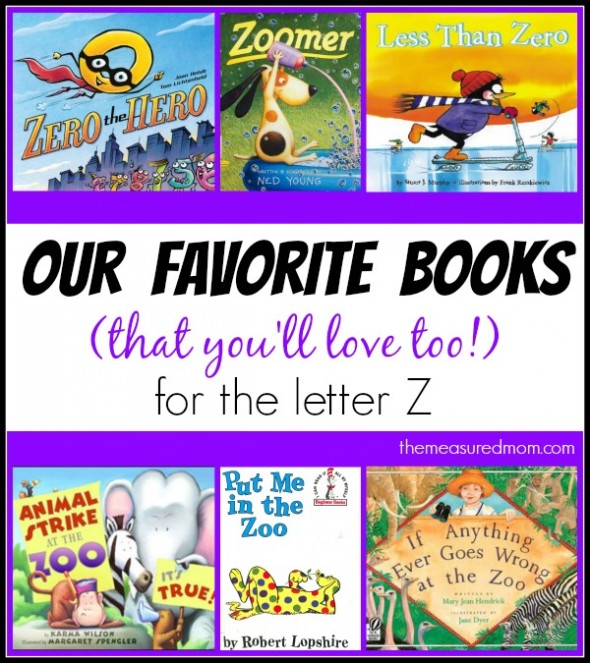 Zero the Hero, by Joan Holub

Zero doesn’t add up to anything.  When numbers subtract with him, they still get their same number.  And they refuse to be divided by him!  Finally Zero learns that when he multiplies, he makes his friends disappear – and what kind of a friend does that make him?

After being mistaking for a donut, Cheerio, and the letter O, Zero is feeling pretty low — until the day his friends need him, and he swoops in to save them like the hero he knows he is.  I love this book.  The hilarious speech bubbles and storyline will have you laughing  — and even though some of the math and humor may be above your preschoolers’ heads, they’ll love it too.  A favorite at our house!

This is part of a series of books about an imaginative puppy named Zoomer — in this book, Zoomer is too busy to go to school. He’s  creating a giant sandcastle out of dog food, sailing a pirate ship, and launching a pirate ship. Kids will enjoy the engaging illustrations and the funny twist at the end.  My boys request this one a lot.

Zero Is the Leaves on the Tree, by Betsy Franco

I like this book because it illustrates the concept of zero in a way that preschoolers can understand.   Zero is the balls in the bin at recess time, the kites in the sky when the wind stops blowing, and the sound of stars filling the night. A simple, peaceful book.

Animal Strike at the Zoo, It’s True!  by Karma Wilson

Here’s another treasure of a book by the author of the Bear Snores On series.  The animals at the zoo feel they aren’t being respected or treated fairly – so they’re on strike!  “‘We’re paid only peanuts!’ the elephants shout.  “And goodness, we’re bigger than that.’ So now they won’t trumpet or lumber about. They just sit around looking fat.'”  We love the silly text and the bright pictures.

If Anything Ever Goes Wrong at the Zoo, by Mary Jean Hendrick

Leslie and her mother visit the zoo often, and each time Leslie is sure to let the zoo workers know that if anything ever goes wrong, they can bring the animals to her house.  Imagine her mother’s surprise when one day the zoo floods… and all the zoo workers take Leslie up on her offer!

A Sick Day for Amos McGee, by Philip C. Stead.

If I could include this book in every one of my book lists, I would. I love it that much.   Amos, the kindly old zookeepker, is home sick with a bad cold.  The elephant is sad to miss their chess game, the rhinoceros (who always has a runny nose)  needs Amos’ handkerchief, and what will the owl do without Amos’ bedtime stories?  Missing their friend, the animals take the bus and visit him instead.  The pictures will steal your heart!

Truth: the word “zoom” is only on the first and last pages.  So it’s a bit of a stretch to say this book teaches letter Z.  But it’s a great rhyming book  for preschoolers – bright, colorful, and imaginative.  Recommended!

If you have a child who’s crazy about numbers, you’ll definitely want to find this one at your library.  Zero is a big round number who sees a hole in her center.  She wants to count like the other numbers, too — but how will she ever add up to anything?  One day Zero learns that by joining with the other numbers, she can add value to everyone.

Put Me in the Zoo, by Robert Lopshire

Here’s a classic book about a spotted animal (a bear?) who tries to prove to everyone that he belongs in the zoo. After demonstrating his many tricks (including changing the color his spots, juggling them, and moving them onto everything around him), Spot is still not welcome in the zoo… he gets to travel with the circus instead!

Less than Zero, by Stuart Murphy

This is such a great book for teaching kids about how to manage their money. Perry the Penguin needs 9 clams to buy a scooter — but when he borrows money to buy things he doesn’t need, he has less than zero clams!  It’s a simple and fun introduction to the concept of zero and negative numbers.

This book doesn’t use the word zoo very often, but it would work great within a zoo theme study.  The rhythmic text tells the simple story of a father-daughter outing.

The View at the Zoo, by Kathleen Long Bostrom

This rhyming book tells about the funny things creatures do at the zoo — and it isn’t until the end that we learn that it’s the animals observing the people!

For math connections, free printables, crafts and more, click on the image below! 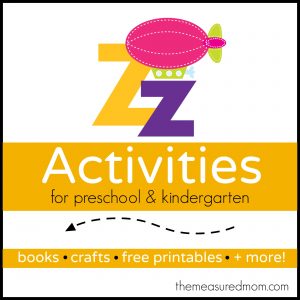