If you’re trying to teach your little one his numbers or letters, this sort of activity can be a lot more effective than flash cards.  For one, it’s fun.  Your child might not even realize he’s learning.  And a bonus is that he burns energy at the same time!

I chose this activity because we’re studying the letter F. It was meant to be a quick way to reinforce our numbers while doing a Frog Jump.  When my Two insisted that he was a bunny, we focused less on letter F and more on identifying the numbers 1-10.  As a bonus, my boys burned some energy on a cold, snowy day.

This is one of those very simple but very effective activities.  You can get the editable lilypad patterns on Sparklebox.  Print them as is and write on them, or edit them any way you like. I chose the numbers 1-10 for my Two, but you could use letters or even sight words. 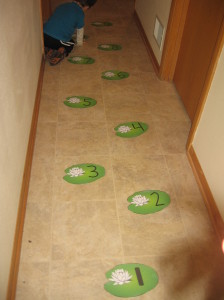 I laminated the lilypads, and we taped them to the tile floor. We used scotch tape because we couldn’t find the masking tape. I think masking tape would work much better, as we had to do a lot of re-taping. 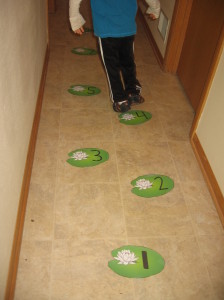 My Four, who has the most energy that needs burning, jumped from lilypad to lilypad, naming the numbers as he went. Later he tried to make larger jumps – from a 1 to a 4, for example.  He also leaped by counting backward, from 10 to 1. 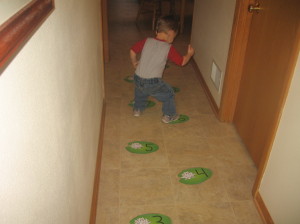 My Two has not quite mastered two-foot jumping, so jumping all the way down the hall was too much for him.  But he loved running to the numbers I called, and by the end of the 10 minutes he was recognizing more numbers than when we’d begun. 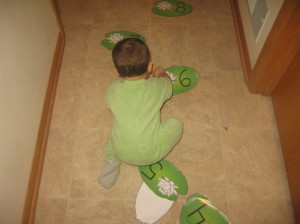 And I didn’t even have to do the clean-up!