Have you seen our Letter of the Week craft collection?  So far we’ve shared a total of 81 craft ideas!  We’re adding seven more this  week — crafts for letter K. 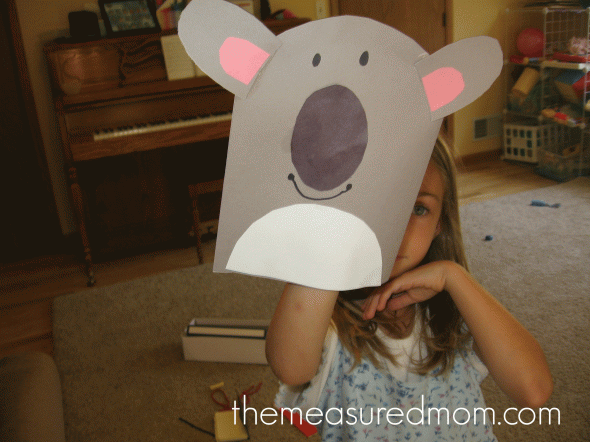 I just love this adorable koala puppet! I bought 12 x 12 inch gray scrapbooking paper, which we folded in half and trimmed.  The kids had fun gluing on all the pieces and decorating with a Sharpie (something they are not usually permitted to do :)) .   In this picture, my Six is modeling her puppet.  You can get a step-by-step tutorial for this craft at Cindy DeRosier: My Creative Life. 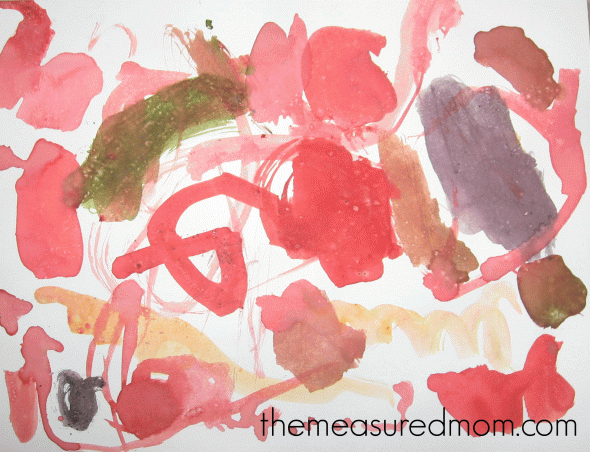 This week marked a first: I bought Kool-Aid for my kids.  But after one permitted taste with a wet finger, they didn’t get to eat  it.  (Yes, I said eat— I remember when I was a kid we’d sneak into the church kitchen and dip our fingers into the giant Kool-Aid canister for a sugar high! Yikes!)

Did you know you can paint with Kool-Aid?  Just dump a packet into a section of a muffin tin and add a little water.  Use some water color brushes, and you’ve got a great open-ended art activity.  The kids loved it – and their creations smelled great!  I forgot to save their best paintings for a picture.  We folded them and turned them into anniversary cards for Grandpa and Grandma! 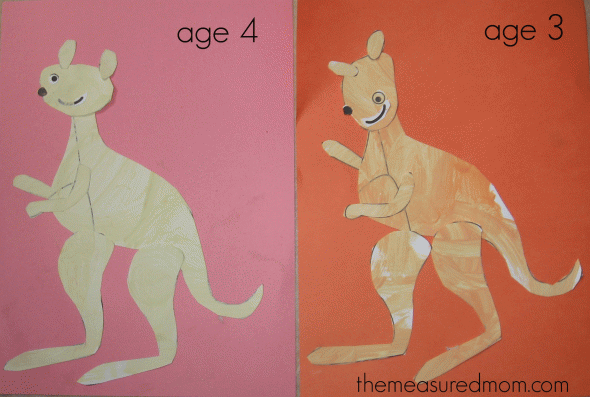 And here’s a not-so-open-ended art activity.  But I think these have value too — they can teach following directions and basic skills (like cutting, gluing, and placing).  My Three and Four painted the patterns while doing a little color mixing.  After the pictures dried, I cut them out (a few too many pieces for my little guys) and guided the boys as they glued to make their kangaroos.  You can get the pattern from Learn Create Love.

K is for King 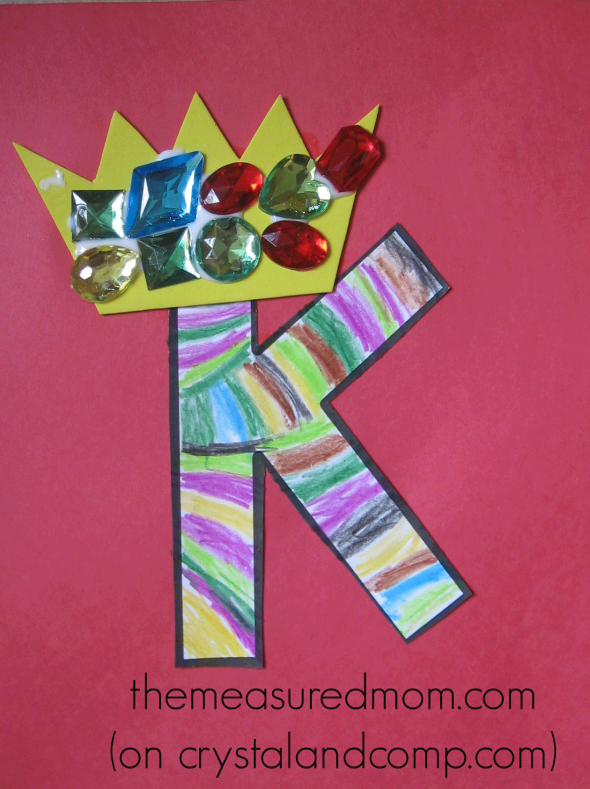 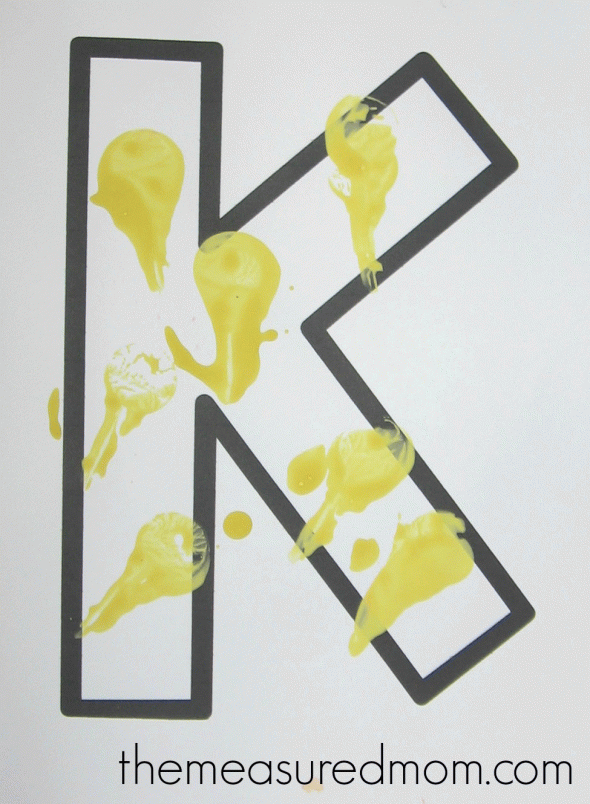 For this project I printed out a giant letter K for each of my kids. Then I hot-glued an old key to a small plastic container.  The kids dipped the key into paint and pressed it onto their letter K’s.  This kind of simple activity is so useful for reinforcing the letter and its sound.

K is for Kites 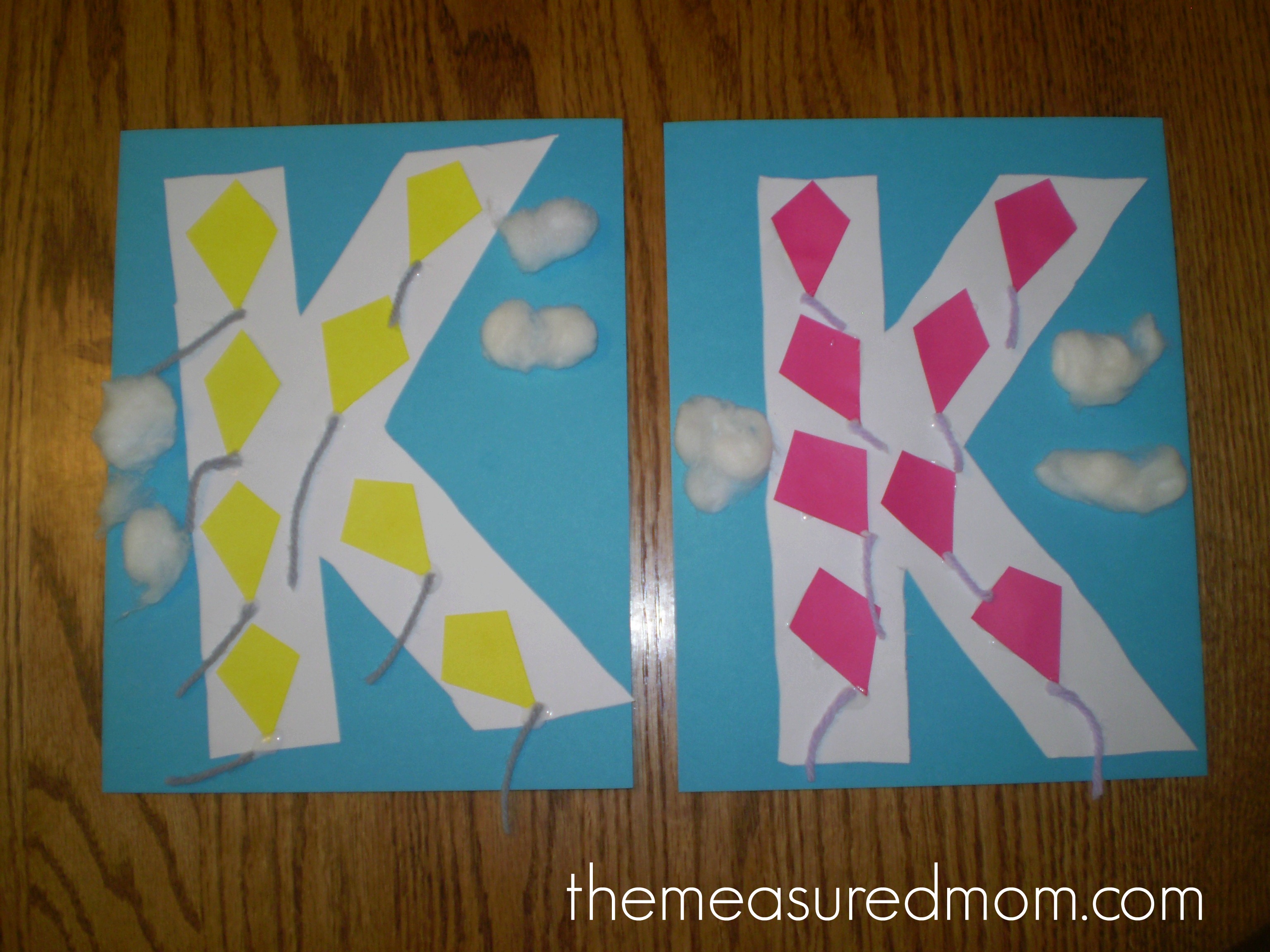 My Four and Six cut out the letter K patterns. Then they glued on the paper kites and used just a dab of glue at the base of each kite to attach the yarn for kite strings.  After adding some cotton for clouds, their simple crafts were complete.

I saved our favorite for last!  To do this craft I gave each child a piece of contact paper cut into the shape of a kite.  I taped it, sticky-side-up, onto the kitchen table.  I added the black cross bars (made of construction paper).  Then the kids added tissue paper squares to decorate.  When they were done, I added another piece of contact paper to seal the craft.  Then we added ribbon for a tail.

Next time I would make the kites a little smaller, as this tested the patience of my Four, who was not satisfied until he had every last bit of contact paper covered with squares.  (Oh, my poor kids and their perfectionist genes!)

I thought this would be the end of it, but all the kids couldn’t wait for me to take the kites off the window so they could add long strings of dental floss and “fly” the kites around the yard.  This kept them busy for most of the afternoon!  It was fun to watch, but I have to say that when my Four started dragging his kite and 20-foot long string around the house, I started going a little crazy!

Check out some of our other Letter K fun… 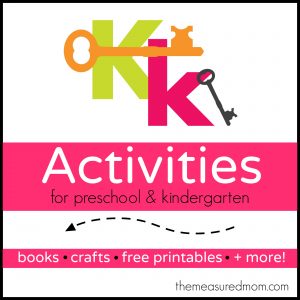 Our favorite children’s Bible story books What to do with your kindergartner when school is cancelled 11 Crafts for Preschool: The Letter L
Milk cap spelling mats for short a words
Kite roll & cover games