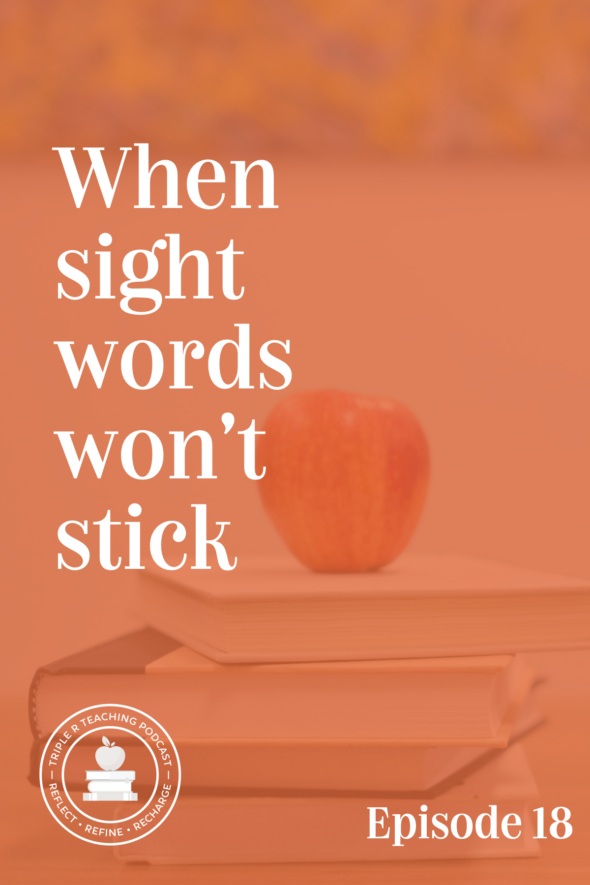 What can you do when learners can’t remember those tricky sight words … no matter what you try?

Listen to the full episode here

You are listening to episode 18, When Sight Words Won't Stick. I just want to say welcome back. Thank you so much for tuning in. If you're listening to this in real time, we're in the early fall or late summer of 2020, and you may have noticed that it's been a while since I posted an episode. That's because we've had a lot going on here at our house, what with the pandemic and having my kids home all the time. There hasn't been a lot of extra time to do things. But I also have a really, really big project that I'm doing, which is taking up the time that I have. And that is I'm working with a designer and a developer to completely redesign themeasuredmom.com website. So that's going to be really exciting. I'm hoping that that's ready to go the end of September, but that's the reason why I haven't posted a new episode in over three months.

I am really excited to be back with you. And we are picking up in the middle of our eight-part series about helping struggling readers.

So, so far we've talked about helping learners who struggle to learn the alphabet, quick tips for teaching letter sounds, how to build phonemic awareness and seven tips for helping kids sound out words. Today, we're going to talk about what to do when kids have trouble learning sight words. Sight words, of course are words that cannot be sounded out phonetically, at least not all the way through. And so kids need to learn them by sight. Hence, the name.

The first tip I have is to remember that many parts of sight words can be sounded out. So we don't want to jump right to flashcards. We want to take a look at each word and examine the parts explicitly. So for example, if you had the word from, you could teach your learners that the F, the R and the M can be sounded out using phonics knowledge. It's that tricky O in the middle that makes it a sight word. So you would examine each letter, talk about the sound that it makes. And then take note that the uh sound in the middle is actually represented by an O instead of a U. There's a website, it's called a reallygreatreading.com and they have these wonderful animations that show you how to explicitly teach these sight words that are mostly phonetic, but have a couple tricky letters in there. I'm going to give you a link to those in the show notes, and it's definitely worth checking out. You can show your students any of those free animations, and you can also use them as inspiration for making your own.

Tip number two is to give kids practice writing the sight word. A lot of times we focus so much on reading it, we forget to have kids practice writing it. When they do that, you can work through the letters explicitly with them as you did when you taught the word, and you can maybe have them grab a highlighter and highlight any letters that make an unexpected sound. You can also have your learners write the words on some kind of special surface like shaving cream, or they can use a chopstick and write the words in colored sand. There are lots of different ways to help your kids who need to learn things in multisensory ways.

So far, we've talked about practicing the words in isolation, both by teaching those individual letters and by writing the word. But it's also really important to follow tip number three. And that is to have kids read the words in context. And this is where simple sight word books are very useful. I have a lot of these on my website, I believe over 40, that are free for you to download. So I'm going to leave a link to that in the show notes as well.

Tip number four is to figure out a way to repeat the words in a fun way. So certainly you can use flashcards. They do have their place, but you're going to want to do something besides flashcards. And we have an active Facebook group, actually, we have three of them and one of them is called Kindergarten and First Grade Teaching Ideas. Last I checked, we are almost at 10,000 members and it's a very active group. Recently, someone asked a question about helping their child with sight words, because they struggled to remember them. And there were so many good ideas there.

So I'm going to pull from some of those ideas for this tip. You can put two to three sight words by the door. So maybe by the light switch, and this could be in your classroom or a resource room or at home. And every time that particular child leaves, they're supposed to tap the words and read them out loud. Of course, now in the time of COVID, you won't want them to touch the words, but they can point to them and say the words as they leave the room.

Something else you can do. This was probably something more for home or maybe in a resource room, but you can give students a lanyard. So one of those name tags that you wear around your neck with the little clip and inside it, instead of putting a name tag, you can put the sight word, and then the child would actually lift up the lanyard to read the sight word and get extra practice that way. Of course, you'd have to have the sight word inserted upside down so that when someone looks at the child, it looks upside down. But when they pick it up to read it, it's right side up. So I would suggest putting a special sight word in their lanyard and periodically having them flip it up and read it to you.

Something else you can do is play hide and seek where you have multiple copies of just three words, and you hide them around the house and your child finds them and reads them. There are many other ways to make sight word learning playful, and I'm going to link to some of the ideas that I have on my website in the show notes.

My fifth tip is to help your child use their body while they're learning sight words. A great way to do this is to do a sight word song that has actions. I would definitely check out Heidi Songs if you have not, again, I'll leave a link to her in the show notes. Heidi is a kindergarten teacher who has created some wonderfully catchy sight word songs with full body actions. So those are really great for helping kids internalize the spelling of a lot of sight words. And then if you do that with the screen, because she has it on a DVD, they can actually see the words as they're singing that.

Another member had this idea. She calls it dribble and shoot where she said that she teaches her students to pretend to dribble the letters and then shoot the basketball when they say the word. So for the, it would be T-H-E, the. So imagine them hitting the air, sort of like they're dribbling a basketball for those letters, and then moving their arms way over their head for the word, the.

Other things you can do would be to teach your students stomping and clapping movements for particular songs, some kind of rhythm that they can do maybe as they march around the room. So think about involving the whole body, if necessary.

My last tip for helping learners, who struggle to learn sight words is to use magnetic letters or letter tiles. So there is a blog post I have about using magnetic letters to teach sight words. It's based on the method that Jan Richardson recommends in her book, The Next Step Forward in Guided Reading. I'm going to link to that in the show notes, but here's an idea from that set of steps. You would have kids build the word with magnetic letters, and it's nice to use the letters that are actually the shape of the letters and not just a letter tile, because they can feel the shape of the letters as they're spelling the word. You have them, make the word, then mix it up and then build it again.

Something else you can do is take a letter away, have them build the word, leaving a space for the missing letter, and then write that letter in the missing space. So maybe you're doing this on a board, like a dry erase board or a piece of paper. Do this several times, maybe take away two letters next time, and then three, until they can simply write and read the whole word.

So those are some ideas for helping kids when sight words just won't stick. Let's review.

Number one, you want to examine the word and talk explicitly about each part, remembering that oftentimes most of the word can be sounded out. There may just be one or two troublesome letters.

Number two, give your students practice writing the sight word, whether that's on a regular piece of paper, in shaving cream, on a dry erase board or something like that. And then you could have them highlight the tricky letters.

Tip number three, have kids read the words in context often in the form of little books.

Number four is to playfully repeat those words. So lots of practice, repeating the same words over and over. This may include flashcards, but I recommend games as much as possible.

Tip number five is to help kids use their whole body as they learn the sight word. And so this may involve tapping, dribbling, stomping, dancing.

And finally, tip number six, have your learners use magnetic letters as they practice reading, building, spelling, those sight words.

I have a whole set of editable sight word games on my website that I highly recommend if you're helping learners master sight words. There are 150 different games included in the bundle. You can type in any words you want and they will auto-populate into the games. The fun thing about this pack is it's seasonal so there's something for any time of the year. So to check out my editable seasonal sight word games, you can go to themeasuredmom.com/sightwordgames, and you will find this bundle from my shop. I'll also leave links to everything else I mentioned in the show notes, which you can find at themeasuredmom.com/episode18. Thanks so much for joining me and I'll talk to you again next week.

Resources and links mentioned in this episode