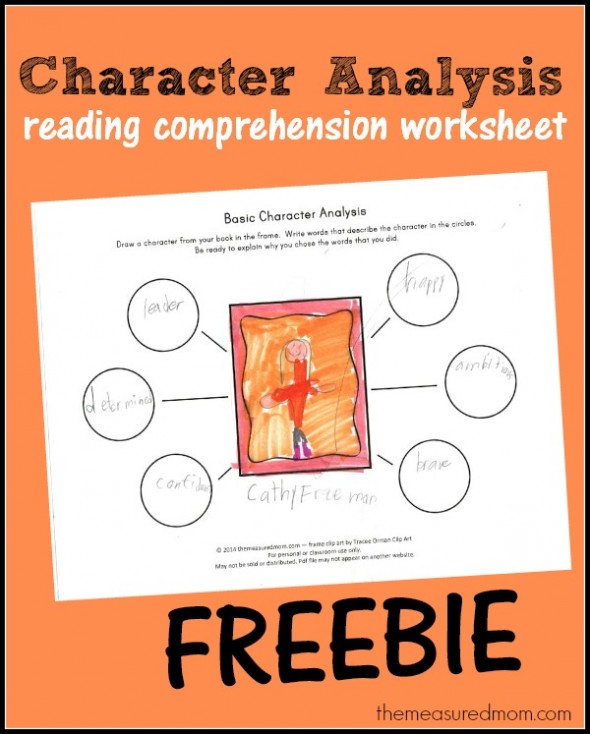 My Seven (going into second grade) is an avid reader.  I’m glad she loves to read a variety of books – both fiction and nonfiction – but now it’s time to take her a step further.

How to teach the concept of character analysis:

1. Does your child know the word character?  Explain that it’s the main person or animal in a story.  Fiction books usually have both major and minor characters.  You can go even further and talk about the main character (protagonist) and the character who’s fighting against him (antagonist).

2. Choose an interesting character from a book your child has just read.  Try to pick a “round” rather than “flat” character.  That just means to pick someone who has a variety of traits and something of a complex personality.  Off the top of my head I can think of some very round characters in children’s literature:

I can also think of some flat characters who are defined by just a few traits:

While all the above examples are fiction books, we chose to do an analysis of a nonfiction character.  I had printed the book Cathy Freeman from Reading A-Z  (that subscription was worth every penny – and no, I’m not getting paid to say that!).  After listening to my daughter read it, I presented a set of character traits.

4. Now have your child illustrate the main character inside the frame of the character analysis chart.

5. Referring to the character analysis chart, talk together about words that describe your character.   Have your child record them in the circles on the printable. 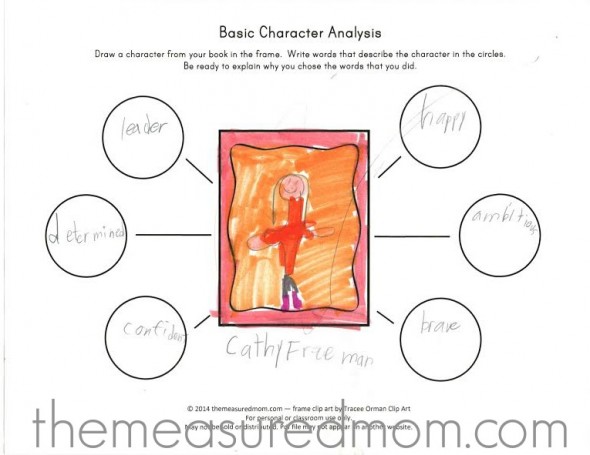 Have you heard of Cathy Freeman?  She is the sixth fastest woman on record.  What makes her even more unique is that she is an Aborigine.  Freeman experienced a lot of prejudice and opposition as she worked toward her Olympic goal.  Here was our conversation as we looked for Freeman’s character traits:

Me: “Let’s read through this list and see if we can find some words that describe Cathy Freeman.”
My Seven: “Adventurous, afraid, ambitious… what’s that?”
“That means that you have big goals for yourself. You work hard to do something.”
“That’s true.”
“Can you tell me how she was ambitious?”
“She wanted to be in the Olympics.”
Great! Write ambitious on one of the circles.”
“Angry, arrogant… what does arrogant mean?”
“It means you think you’re better than other people.”
“I don’t think she’s arrogant… is she brave?”
“Well, I think she was brave.  She ran a race in front of thousands of people.”

6. As your child fills in the circles, make sure she can support each trait with information from the book.  Help her to avoid using words that mean the same thing.  The most important part of this activity is to think about the story.  I didn’t want my daughter to pick a bunch of words and write them in without backing them up.  Because she is just going into second grade, I chose not to have her record the support from the book. For older children you would want that to be part of the activity as well.

Get your free character analysis pages!

Build comprehension with this amazing bundle!

In addition to early chapter book lists, you’ll get response sheets that focus on character, setting, plot, and vocabulary. You’ll love this resource!