Looking for games to teach words with bossy r?  We’ve got five of them! 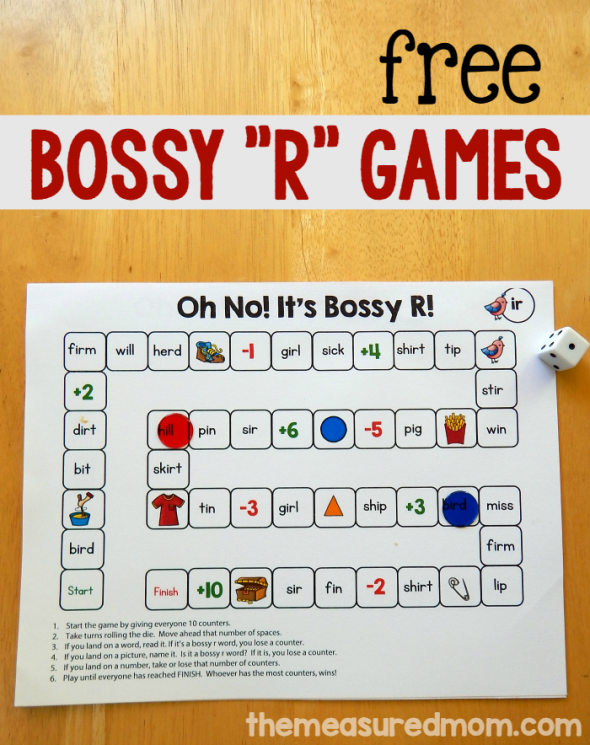 Those bossy r words are tricky.  Sometimes we call them words with “r controlled vowels.”  Because when you stick an “r” after the vowel, it changes the sound. 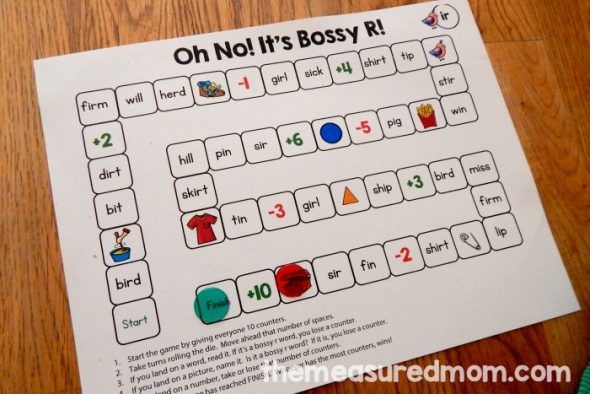 1. Give each player ten counters.  We used these transparent counting chips.

5. If you land on a number, add that number of counters to your pile.

6. After all players have reached Finish, add up your counters. Whoever has the most, wins! 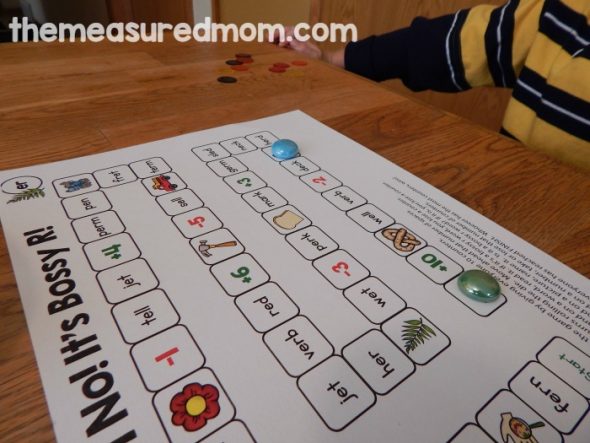 I’ll tell you right up front that this game did not go over as well as my Is it Real? game for bossy r words.  This is because my Four (who just turned five today) didn’t like losing counters.  He was frustrated by how often he had to give them up.

Because of that, I made a change to the game so that it looks slightly different than what you see in the pictures. All the numbers have been changed to positive ones.  So instead of a -3, for example, it’s a +3.  I’m going to print these again and see if that gives him a better attitude. 🙂 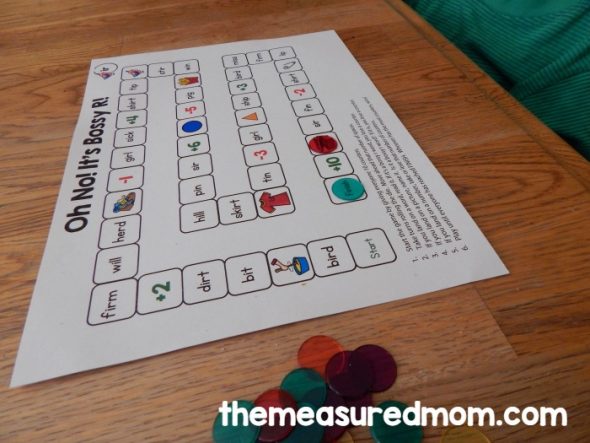 Since most kids playing this game will be in kindergarten or first grade, they’ll hopefully be better sports than my son was. 😉

Why I think this is a great game

2. It gives a lot of practice reading both r-influenced vowel words and short vowel words.  This is important because it makes kids really look closely at the words instead of assuming they’ll all be pronounced the same.

3. It helps kids notice spelling patterns. My son made his own observation about a word without my prompting: “It’s a bossy r word because the r comes after.  If it was r-i, then it wouldn’t be a bossy r word.”

4. The pictures help kids listen to sounds in words.  It’s important to be able to hear the bossy r sound in addition to recognizing it in a printed word.

5. The games are quick. You know I’m all about quick, fun practice!  We were able to play a single game in less than ten minutes.

When my oldest son (a fluent reader at the end of kindergarten) saw the game, he observed, “That looks like fun.  Is it?”  His younger brother said it was, so he must have forgotten his earlier frustration. 🙂 I hope your beginning reader enjoys it!

(I like color, but if you don’t want to use color ink, these work just fine printed in grayscale.)

Get your free games!

Your students will ASK to practice their reading when you start using this versatile set of word games! Simply type up to 12 words, and they’ll autofill into the 150 seasonal games.