Those pesky subject-verb agreement rules can trip us up! Use these games to help kids master them. 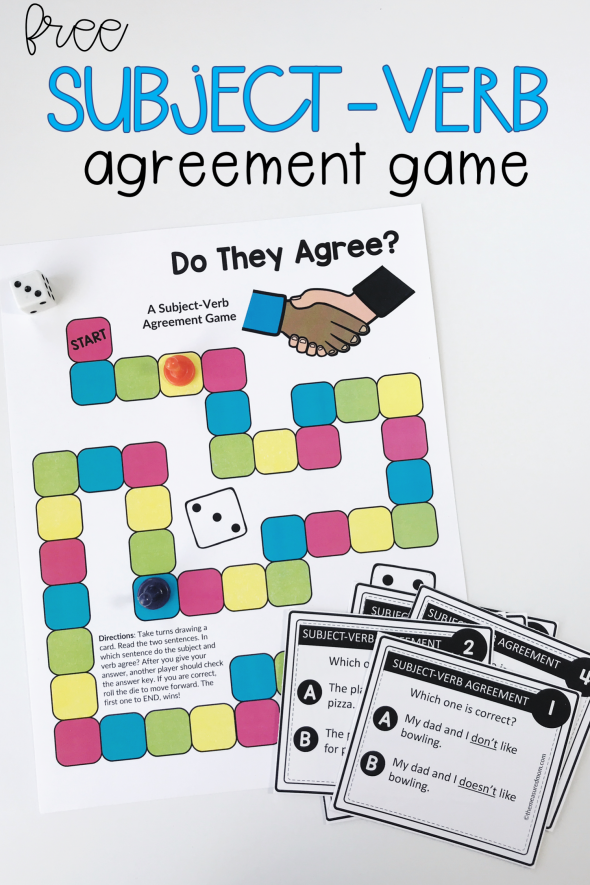 Are you a grammar nerd?

I was one of those weird kids who actually liked diagramming sentences in high school.

But even for a grammar nerd like me, subject-verb agreement rules can be tricky.

So I decided to create a set of games to reinforce them. 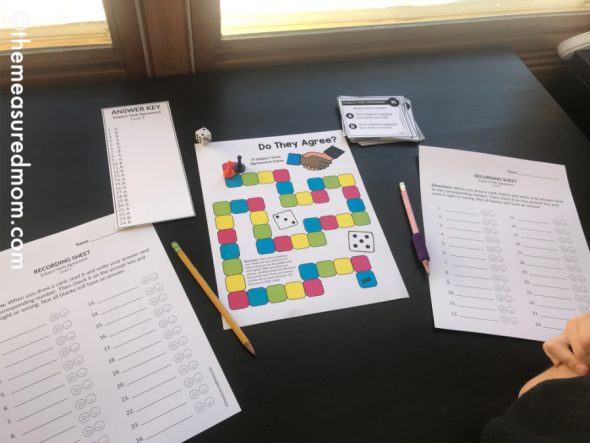 To set up the game, you need the following: 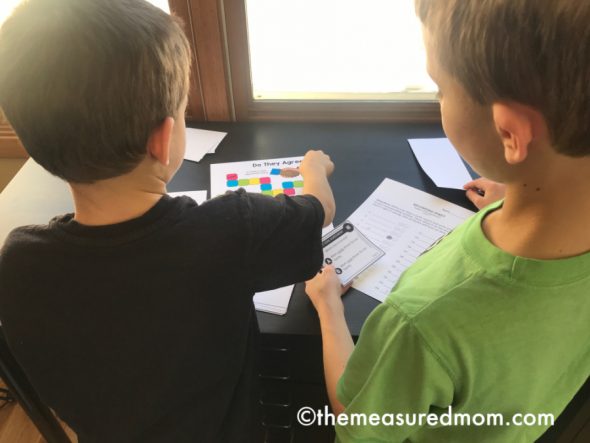 I used the Level 1 game with my first and third grader. 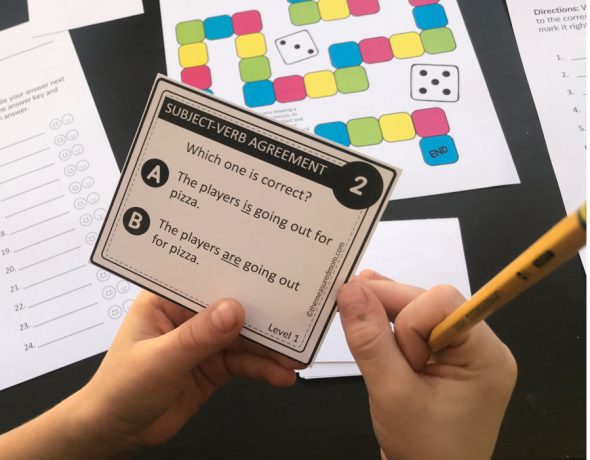 They took turns reading the playing cards and marking the answer on their recording sheet. 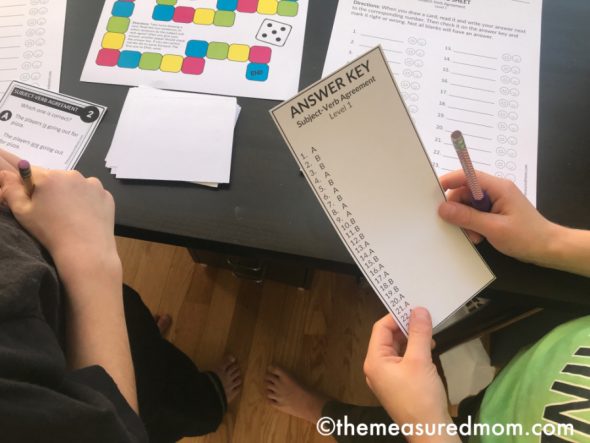 After one player wrote his answer, the other checked it on the answer key (which we kept face down when we weren’t using it). 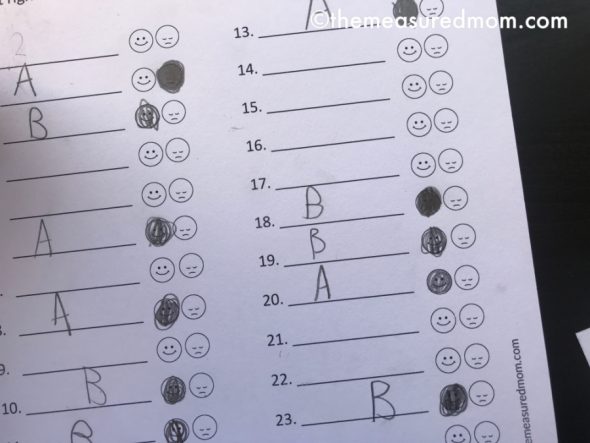 Then the first player marked whether his answer had been correct or incorrect. We played until we ran out of cards. Then they took turns rolling the die to see who got to END first. 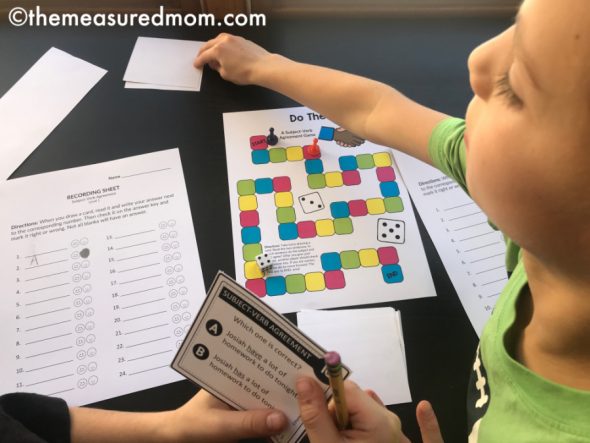 While they can’t articulate even the simplest subject verb agreement rules yet, my first and third grader were able to read each sentence and tell whether or not it was correct just by the sound of it. 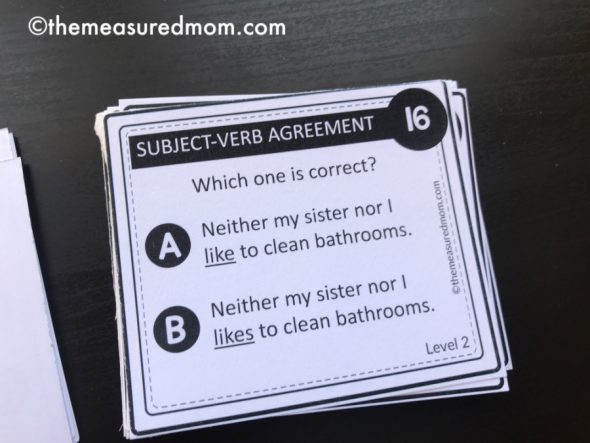 The download also includes a harder version – more appropriate for older learners. I used the level 2 game with my fourth and sixth grader. 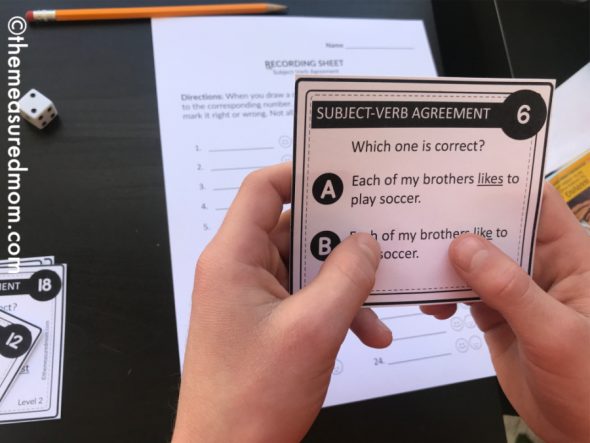 Because the question cards were a bit trickier, I often stopped to explain a rule of subject-verb agreement to my fourth grader. (His older sister has been learning them in school and has them down.) In the above example, I told him that we have to look at the word before a phrase that starts with of when determining what verb to use.

While I didn’t have it ready at the time, I’ve included a printable list of subject-verb agreement rules in the download that you can give to your students as a reference.

Our dogs run in the park.

A subject comes before a phrase beginning with of.

The bouquet of roses is on the desk.

Two singular subjects, connected by or, either/or, or neither/nor require a singular verb.

Either my mom or my dad is coming to my game tonight.

When one subject is singular and one is plural in an or, either/or, or neither/nor sentence, the verb agrees with the noun or pronoun closest to it.

Neither my dad nor my  brothers like to watch baseball.

In most cases, use a plural verb after two or more subjects connected with and.

The meat, potatoes, and vegetables are on the table.

My principal, along with all the teachers, wishes that tomorrow would be a snow day.

The turkey (and all the side dishes) is ready for Thanksgiving dinner.

Use a singular verb with distances, periods of time, etc. when considered as a unit.

Thirty-five hours is a long time to be in labor.

Five dollars a week is what I get for allowance.

If a word indicates portions (a lot, a majority, some, etc.) use the noun after the word of to determine whether you need a singular or plural verb.

Some of the pie is missing.

Some of the pies are missing.

A collective noun may be considered singular or plural, depending on the context. Consider whether the noun is being used to represent a group or the individuals within that group.

The army is going to attack tomorrow.

The army are fighting among themselves. 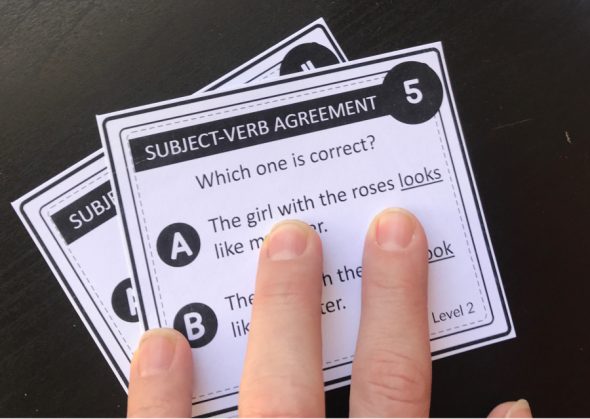 One of the most common errors both kids and adults make with subject-verb agreement has to do with prepositional phrases that follow the subject. In the above example, we use the word girl (and not the word roses) to determine what verb to use.

Remember – I’ve included a copy of the rules inside the download. Use it a reference for your students (or for you ?- I won’t tell).

Get your free task cards!

Members of The Measured Mom Plus get access to many more printables for teaching grammar … nouns, verbs, adjectives, punctuation, and more! In fact, members have 2000+ math and literacy printables right at their fingertips.