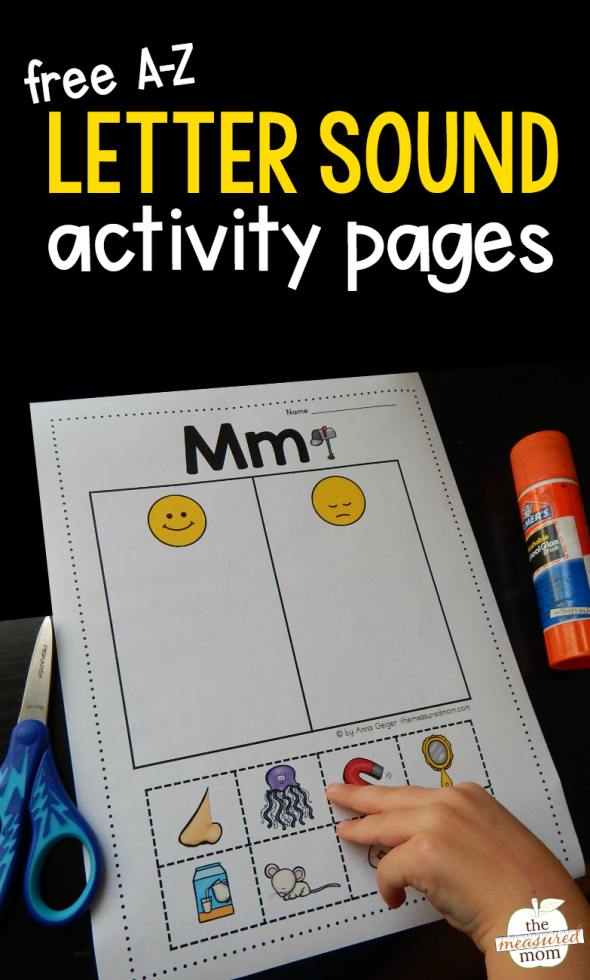 My Three (three months shy of four years) loves doing learning activities with me, and asks for them nearly every day. She loved our year of letter of the week, and so did I.

Playful activities are a lot of fun!

Now that she is close to four, I’m working at helping her master the letter sounds. Because while she recognizes almost any letter (upper or lowercase) by sight, the sounds haven’t come as easily.

All of her four older siblings knew their sounds inside and out by this age, so it’s a new challenge for me.

I’ve learned that it’s not just a memory issue; it’s a phonemic awareness challenge. She has a hard time separating a beginning sound from a word. 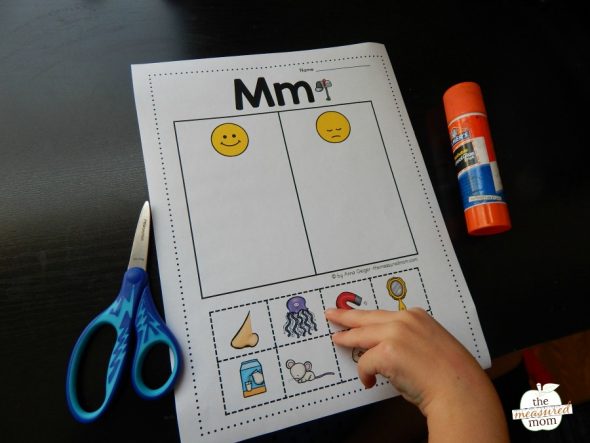 I created these beginning sounds activity pages a few months ago in the hopes that they would help.

So I pulled them out again today, in the hopes that she’d be ready for them.

Well, yes and no.

First, let me explain my reasoning behind the activity pages. I kept them super simple. Each page focuses on hearing just one letter sound. There are eight pictures. Learners glue the four pictures that begin wtih the focus letter’s sound under the smiley face. They glue the four letters that don’t begin with the letter’s sound under the sad face.

Today I chose two activity sheets – letters M and T, because M is the first letter of my daughter’s name, and because T has a pretty easy sound to hear. 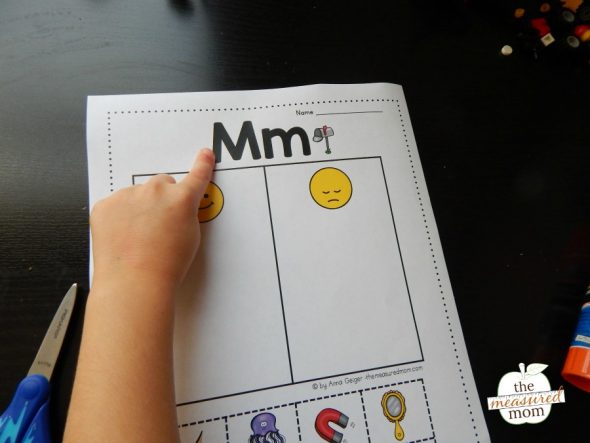 I asked her to name the letter at the top of the page. “M!” 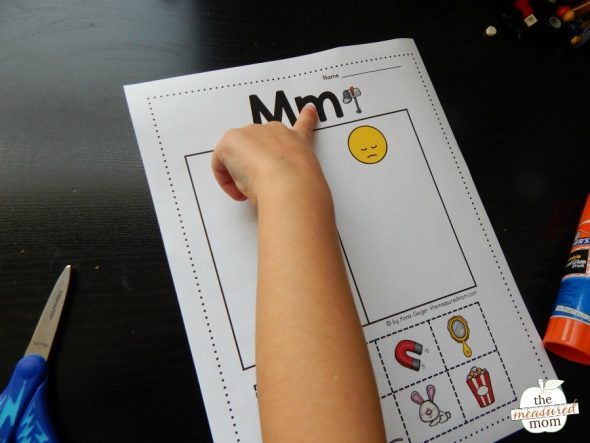 “Show me the lowercase letter m.”

So far so good. 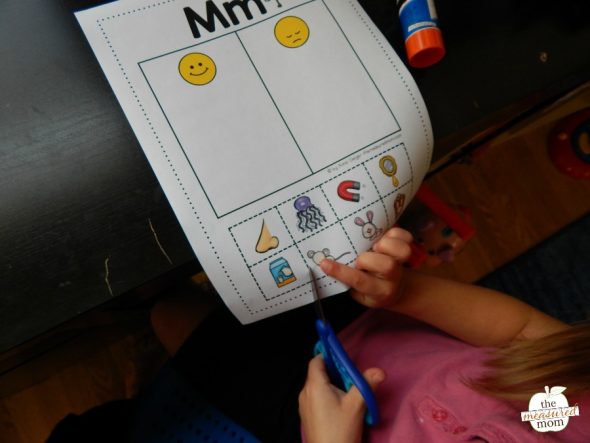 I was surprised that she wanted to cut out the pictures, and not so surprised when she cut out one and asked me to cut the rest. 🙂 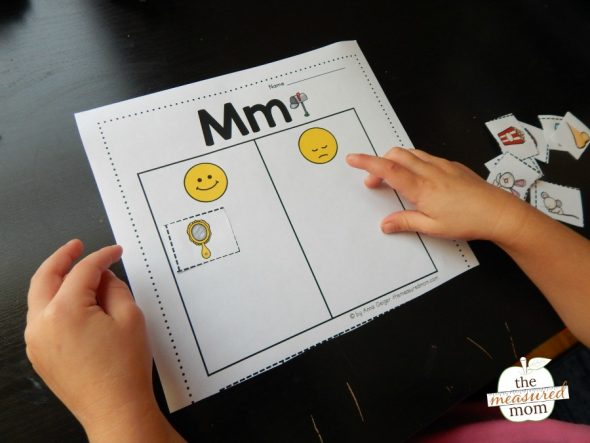 For each picture, I helped her say the name and stretch or isolate that beginning sound. “Mirror! Mmmmmirror! Does that start with /m/?” 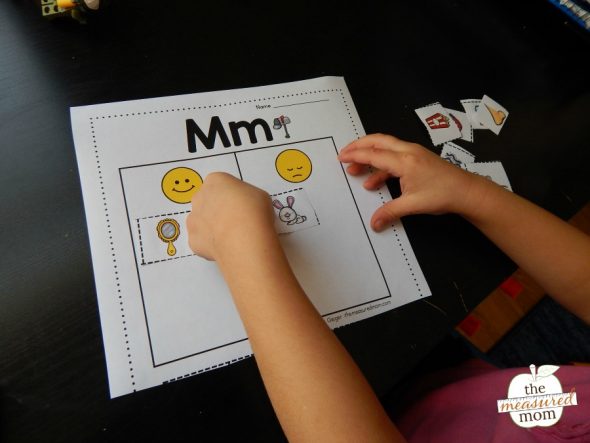 “Okay, so that one goes on the sad face side.” 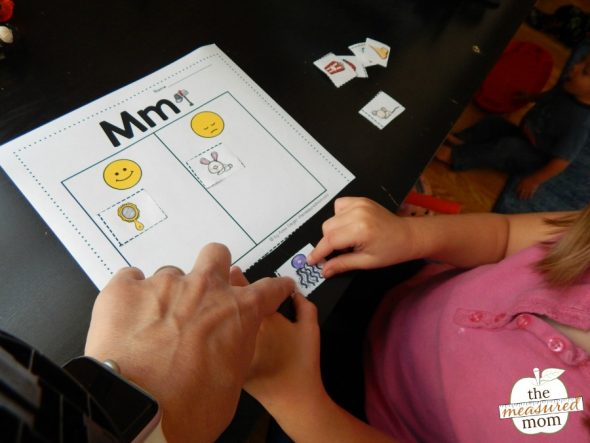 She did okay with a few pictures.

But it wasn’t long before the activity kind of fell apart. 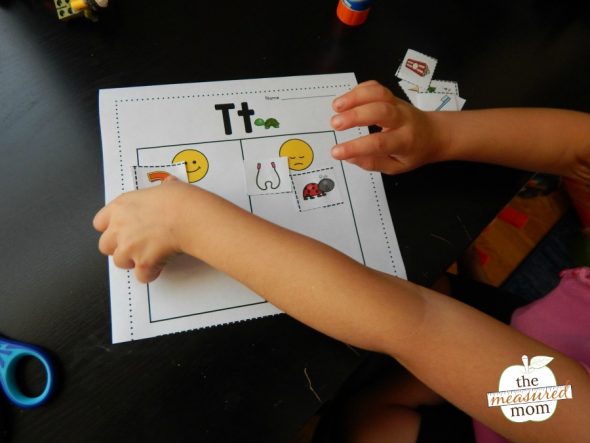 And it kind of went on like that. I tried different ways of isolating the sound. I tried a pat, pat, clap motion (patting my thighs and clapping my hands): “Two! /t/ (pat) /t/ (pat) two (clap)!”

But she didn’t catch on.

So … what’s my conclusion?

I’ll need to try something else, like these simple Say the Sound games that start slowly and gradually add sounds.

Members of The Measured Mom Plus get access to even more printables, plus no-print resources and video trainings.