A reader asked for a set of clip cards to help her students distinguish beginning sounds.

She asked for a set of pictures – three of which start with the same sound, and one that doesn’t.

In answer to her request, I created this phonemic awareness activity.

In the above level 1 example, you have the words horse, ax, astronaut, apple.

The /h/ sound is easily distinguishable from the sound /ă/.

This is a level 2 card. Astronaut, alligator, egg, apple.

The short vowel sounds /ă/ and /ĕ/ are made in the same part of the mouth, making this card more difficult.

This is a level 2 card because the /t/ and /d/ sounds are made in the same part of the mouth. (The fancy phrase for that is “point of articulation.”)

When you join our low-cost membership, The Measured Mom Plus, you’ll have instant access to 2000+ printables … for teaching phonemic awareness, alphabet learning, math skills, and so much more!
CHECK OUT THE MEMBERSHIP HERE 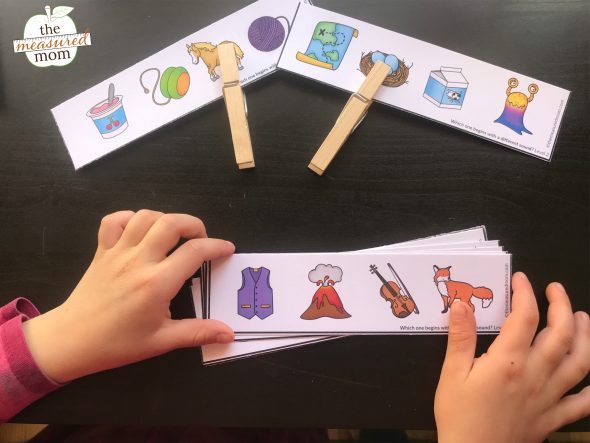 My daughter (age 5) is strong with beginning sounds, so I started right away with the level 2 cards.

She named each picture and then clipped the picture whose beginning sound was different. 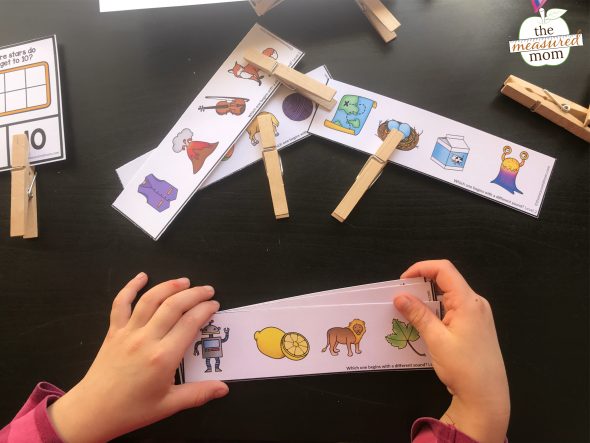 She had no problems at all until she got to this one. Since she struggles to properly articulate the /r/ and /l/ sounds, she couldn’t hear the difference. 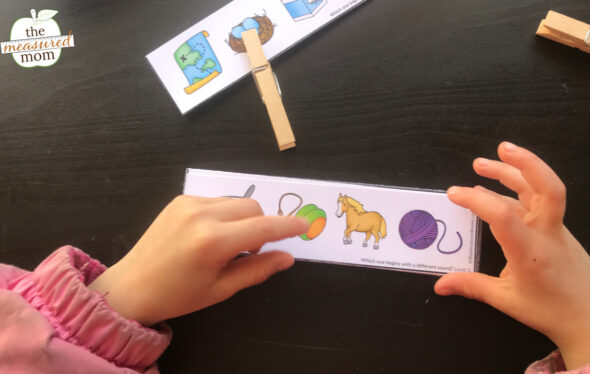 Since my daughter knows all her letters and sounds, these cards were simple review/reinforcement.

They’re best for children who are still learning to match sounds to their corresponding letters.

I hope your learners enjoy these!

Get your free phonemic awareness cards!