When we think about how to teach fractions, we should start at the beginning. What are the first concepts children need when learning about fractions, and how can we teach them in a meaningful, hands-on way? 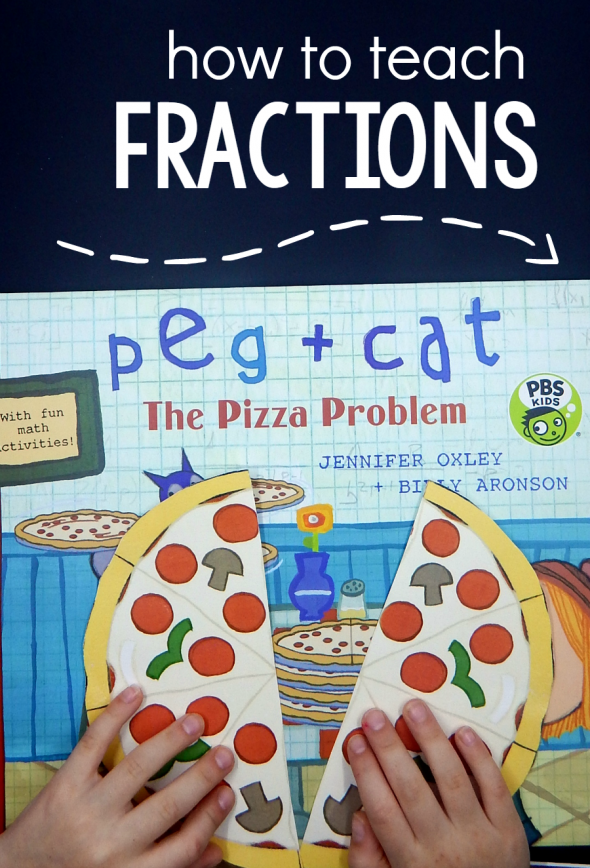 To begin our fractions lesson, I started with a story.

“Imagine that you and your brother finished breakfast and played outside all morning. You had so much fun digging and planting in the dirt that you forgot all about snack time.  In fact, you were so busy you didn’t even hear me call for lunch.

By the time the two of you came in, you were famished!  You asked me what there was to eat, and I said, ‘Well, you didn’t come in for lunch, so all I have left is one mini pizza.  I guess you’ll have to share it.'”

I pulled out a paper pizza and asked my kindergartner, “How many pieces should we cut it into?” 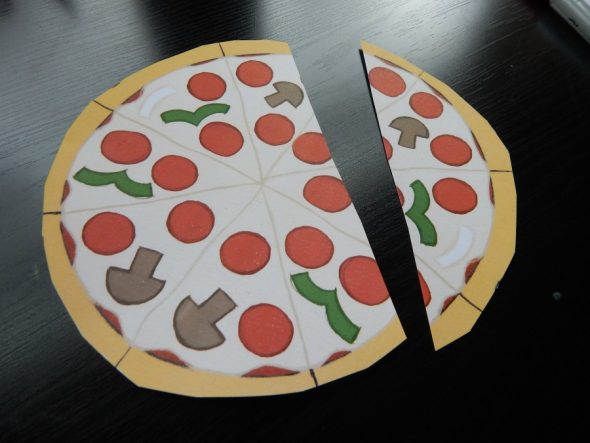 I cut the paper pizza into two.  Holding up the large piece I said, “We’ll give this piece to your brother.  And you can have this smaller piece.  Does that sound fair?”

My Five surprised me by answering, “Yes.”  When I looked unsure he explained, “Because he likes mushrooms, and I don’t.”

In the end he agreed that the pizza was cut most unfairly. 😉

Next I pulled out a fun new book called Peg and Cat: The Pizza Problem. I’ve always loved introducing new math concepts with children’s literature, and this book does a great job simplifying the concept of fractions for preschoolers and kindergartners.

In the story, Peg and Cat have a pizza shop. The problem comes when one of their customers orders just “half a pie.”  What is a half?

Through diagrams, more examples, and even a fun little song, Peg and Cat learn that “there are two halves in every whole.” 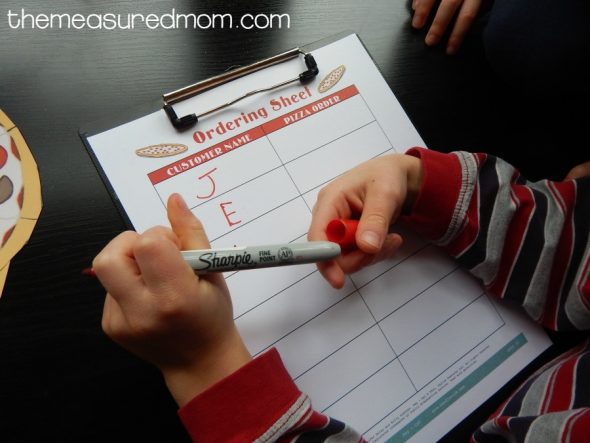 My Five enjoyed the book’s entertaining story and silly characters, as did his younger brother (age four) who’d heard it before and wanted to be sure to hear it a second time.

After we read the book and talked about it, I pulled out some paper pizzas and an ordering form that I’d printed from the book’s free teacher’s guide.  I told my Five that his little brother, big sister and I were going to order pizza.  Like Peg and Cat, he needed to take our orders. 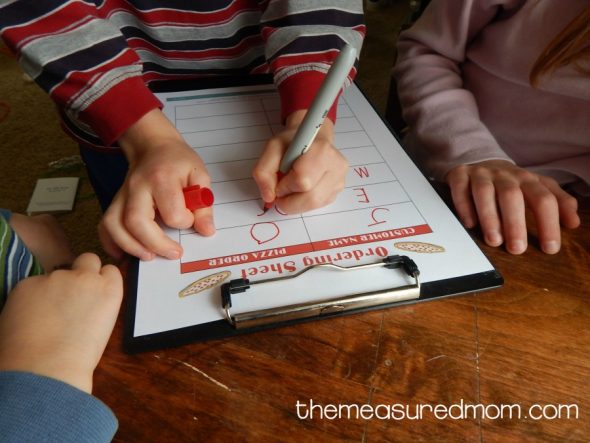 He wrote down our first initials and then came to the table, where my Four ordered a whole pizza, my Eight ordered 1 1/2 pizzas, and I ordered 2 1/2 pizzas.

My Five drew circles and semicircles on the ordering form, as he’d learned from Peg and Cat. 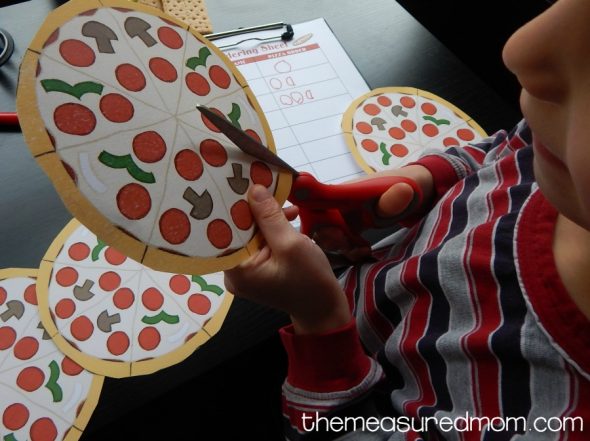 Next, he went back to the pizza kitchen (his desk), where he cut apart pizzas (also from the free teacher’s guide) and prepared our orders. 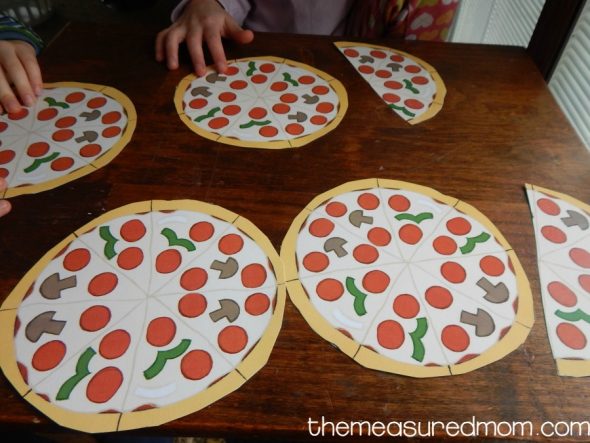 Lunch was served!  As he gave us each our order, I asked again how much pizza each of us had. My Four, also eager to participate, answered first.  Seeing my order of 2 1/2 pizzas he said, “You have three pizzas.”

But my Five was quick to correct him. “Mom has two and a half pizzas.” 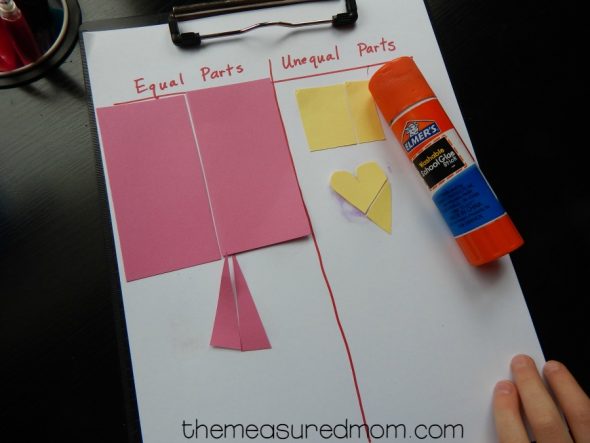 Before moving to the next part of our lesson, I wanted to make sure that my Five understood that we can’t describe a part of something using fractions unless it’s divided into equal parts.  My Eight had cut out some shapes for us.  I cut some into equal parts and some into unequal parts.

My Five glued them in the correct columns. 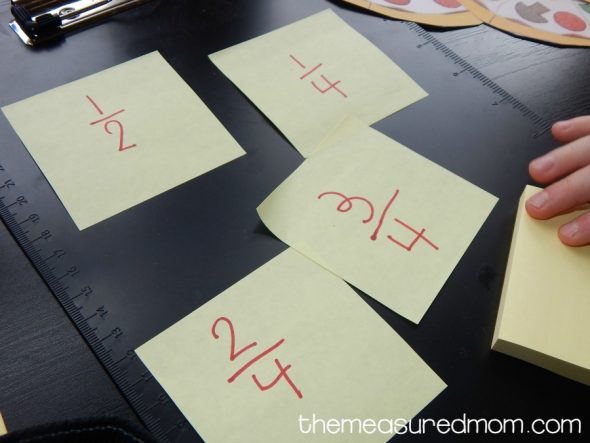 Now that my Five understood the basic concepts of whole, half, and equal parts, we were ready for some basic fraction notation. I modeled how to write the fraction “1/2.”  Then I invited my Five to write down other fractions.

I gave him a permanent marker, his favorite writing utensil, but one he’s not allowed to use unsupervised. 🙂

As I named each fraction, he wrote them down on sticky notes. 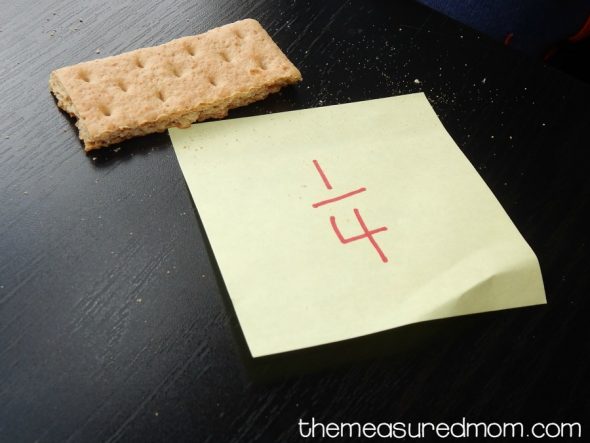 Then I pulled out a graham cracker. I had broken it apart into four equal pieces (tip: use a knife instead of relying on the lines that are baked into the cracker, or you might have a cracker broken into many more than four parts…).

I removed a piece from the cracker and asked him to show the fraction which named how much was taken out.  I helped him locate the note with “1/4” written on it. 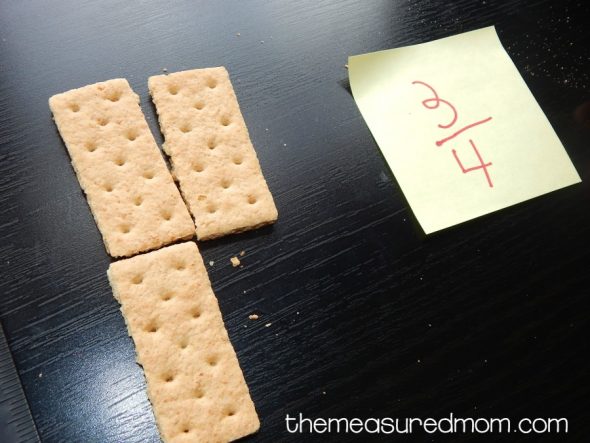 “What fraction shows how much of the cracker is left?” 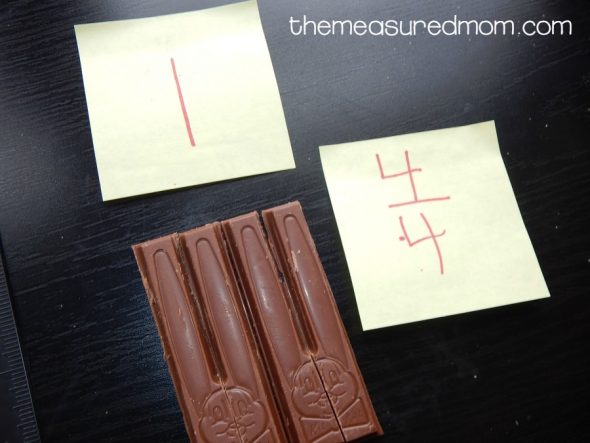 Then I pulled out some chocolate.  Because even though I don’t remember the teacher, grade, or even the school, I do remember learning fractions with a chocolate bar.

He put the pieces of the candy bar together to form one whole.  After I showed him the numeral “1” I asked him to find a fraction that meant the same thing.  After he located “4/4” I gave him a high five and told him he had found an equivalent fraction. 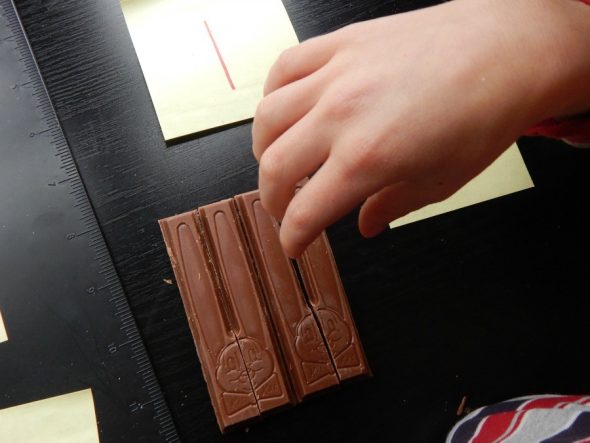 By this time, the chocolate was calling his name. He took 1/4 for himself and distributed the remaining 3/4 to his siblings.

And that’s what I call a successful, tasty introduction to fractions!  What are your tips for teaching fractions to kindergartners?

Ideas for extending the lesson

*This is a sponsored post on behalf of Candlewick Press.  All opinions are mine!