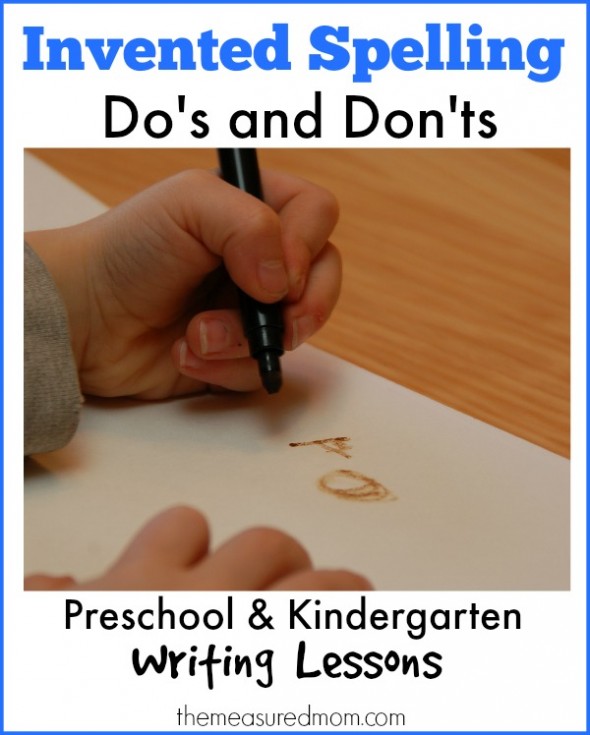 Welcome to Lesson 8 in the Preschool & Kindergarten Writing Lesson series from This Reading Mama and me!  So far we’ve shared a variety of tips to help you teach your young writers at home or in the classroom.  One thing we’ve emphasized is that all children learn to write at their own pace and level of development.

This is most evident when we look at children’s spelling. 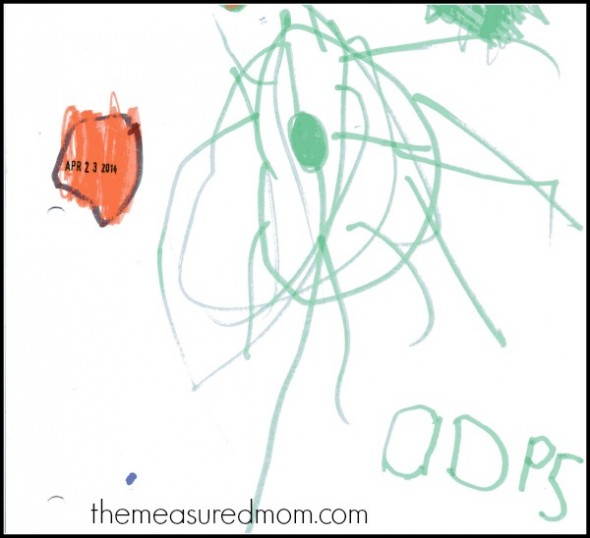 Here’s a drawing by my almost-four-yearold.  Can you decipher his writing?  It says “octopus.”  Clearly my almost-Four “invented” his own spelling.  And even thought I’m a grammar nerd* who thinks that being a copy editor is a dream job, I’m thrilled with what he was able to do on his own.

(*Fellow grammar nerds, you might appreciate how I agonized over the spelling of “do’s and don’ts” in this post.  Even though what I went with is technically grammatically incorrect (do’s should be dos),  it looks right and makes the pronunciation evident.  So I’m sticking to it.)

What is invented spelling?

Invented spelling (sometimes called phonetic spelling) is when children spell words the best they can using their phonics knowledge.  As children grow as readers and writers, their invented spelling looks begins to look more like conventional spelling, until it disappears altogether.

How can we help our children make the most of invented spelling while also guiding them on the path to conventional spelling?  Read on.

The Don’ts of Invented Spelling

1. Don’t expect all early writers to be capable of the same thing when they are the same age.   When our children start to talk, we don’t expect perfection.  “I are hungry” isn’t cause for concern; it’s a reason to celebrate that our children are experimenting with language.

When they learn to read, some children will grasp the concept of  “sounding it out” when they’re preschoolers.  Other children might be in first grade.

Kids learn to spell at different stages too.  It’s important to understand what those stages are so we can celebrate what our children are able to do. To learn more about the spelling stages, visit this post.

2. Don’t view invented spelling as a crutch.  It’s actually very valuable for early writers!  When children have to stretch out words and hear every sound, they’re exercising their phonics knowledge.  Reading back their writing is a phonics exercise, too!

3. Don’t avoid invented spelling by giving every spelling that your child asks for.  Do you have a child who doesn’t want to invent spellings?  A child who’s such a perfectionist that he won’t write a word unless he can spell it correctly?  Believe me, I understand. My Five (not yet in kindergarten) is one of those kids.  It’s temping to avoid the battle and give our children the spellings they want. But by doing that we’re crippling them. How will they ever have the confidence to spell when we’re not around? 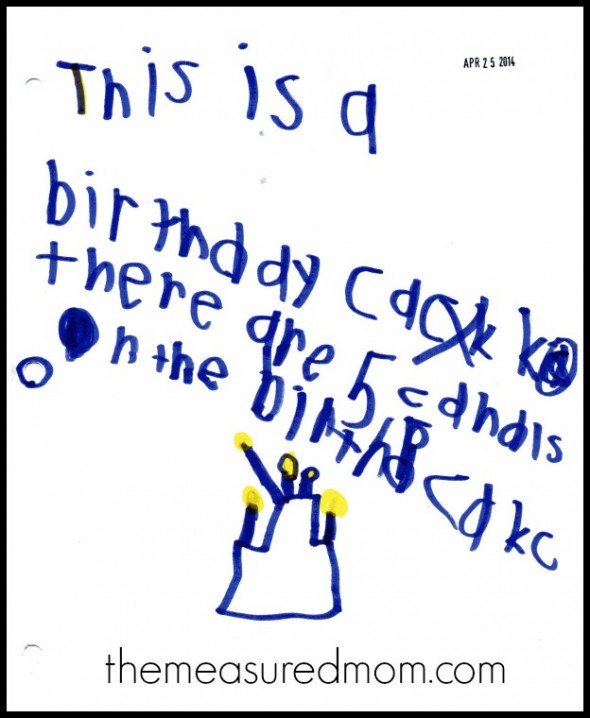 When my Five was writing this page, he wanted to spell the word “cake.”  I wanted him to puzzle it out for himself.  Even though he’s a very good reader, I suspected that he did not understand the vowel-consonant-e spelling pattern.  He needed to work this out himself.  When I said I wouldn’t give him the spelling, he cried.  He didn’t want to keep working.

I finally convinced him to give it a go.  “If you write the word your own way, I will show you how to spell it when you’re done.  But remember that your writing notebook is a record of what you’ve learned, so we won’t go back and change it.”

When my sister taught kindergarten, if a child asked her if his spelling was correct she’d say, “That spelling is right for today.”

4. Don’t allow careless spelling.  In my experience, some parents and teachers misunderstand invented spelling.  They think that a rough draft is a “sloppy copy” in which children can throw spelling and grammar out the window because they are just “getting their ideas onto paper.”  I disagree.

Children should be held accountable for what they know.  For very young children, that may mean writing an E that takes up part of the paper and not the whole thing. Eventually it may mean writing the E correctly and not backward.  For my Four, it means writing “the” correctly, because this is a word he’s known a long time.  I can expect my Five to leave spaces between words and to spell CVC (as in hat) correctly all the time.   For older children with spelling lists, we can expect them to spell those words correctly after they’ve learned them.

5. Don’t leave all the writing and spelling instruction to your child’s teacher.  I know it can be hard to find time to write at home, particularly if your child attends school, but if we leave it all to the teacher, how will we know what our children are capable of?  By writing at least a few times a week with your child, you’ll know what he can do and what to expect.  Check out my post about how to motivate kids to write at home if you’re ready to get started.

The Do’s of Invented Spelling

1. Do remember that early writing looks different for every child.   I know I said this already, but it’s so important.  Early spellers may use just a single letter for words.  Gradually they’ll add ending sounds.  Eventually they’ll add the middle.  We want to recognize and celebrate where our children are at developmentally. Check out my post about teaching tips for the early stages of writing.

2. Do encourage children to write words they can’t spell.  My Four drew a picture of Pete the Cat.  When I asked him about it, he told me that Pete was on the beach. 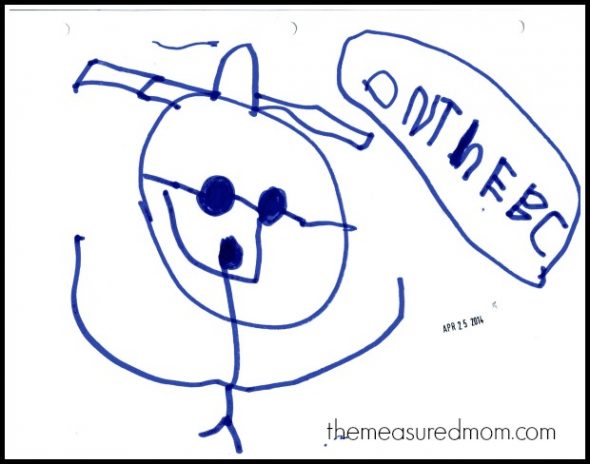 “You can do it!  I’ll help you write the sounds you hear.”

3. Do give hints to help.  For the very earliest writers, help them listen for the sound at the beginning of the word and write the correct letter.  Later you’ll be able to streeeetch out the word with them and help them write the sounds they hear. (A rubber band is a great visual for this.)

When my Five was writing a thank you note, he didn’t know how to spell “dear.”  Since this was a word he’d be using a lot, I wanted him to be able to spell it correctly. But I didn’t want to just hand him the spelling. So I asked if he could spell the word “ear.”  I helped him spell “ear” and showed him how he could make the word “dear” using that spelling.

When is it okay to just give a spelling?  Here’s the question I ask myself: “Will giving the spelling help my child for the future?”  If my Five asks how to spell the number word “two,” I’ll tell him. I know he’ll remember it, and it’s an important word to know. If he asks how to spell “alligator,” I’ll ask him to streeetch out the word and write the sounds he hears.  He’ll learn much more from puzzling that word out than from me handing the spelling to him.

6. Do provide resources to help your child spell. 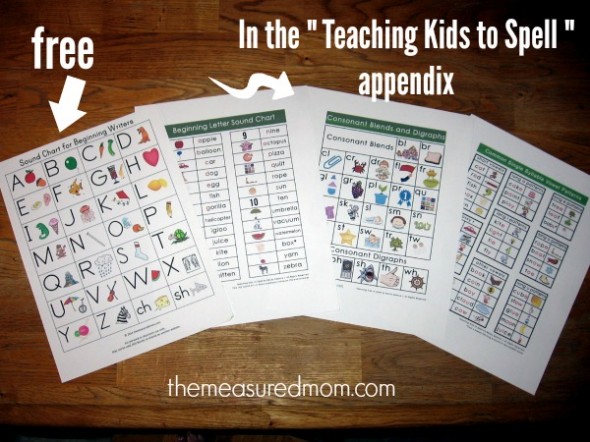 I love to provide charts that my kids can use to help them with spelling.  Your youngest writer will benefit from an alphabet sound chart.  I created one with capital letters, because the very earliest writers typically write with just capital letters.  You can get this useful, simple chart by clicking HERE.

Be sure to check out the rest of the posts in our Preschool & Kindergarten Writing Lessons series! 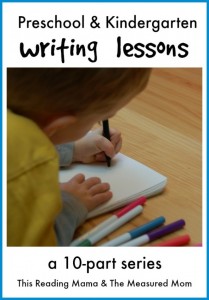 If you’re looking for printable games that you can use with any word list, we highly recommend this collection from This Reading Mama. Many of the games are editable! Purchase below using my affiliate link.