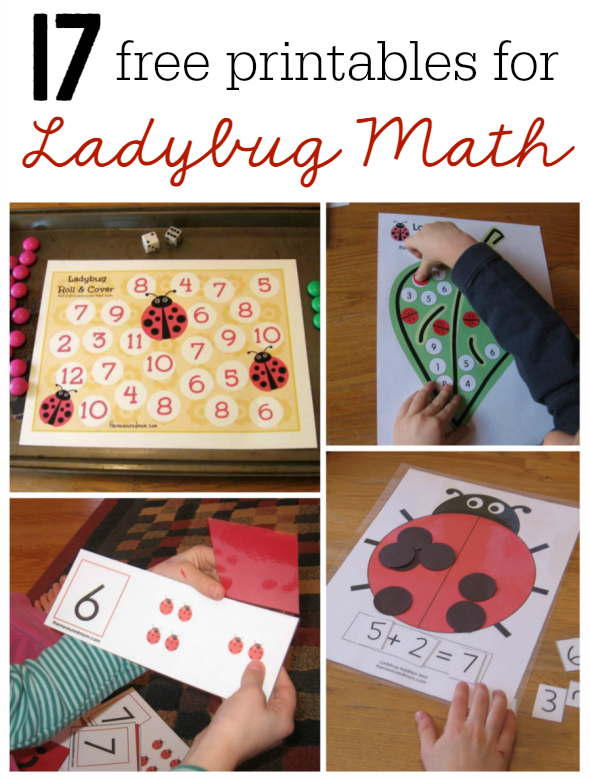 1) Number Recognition – Ladybugs on a leaf 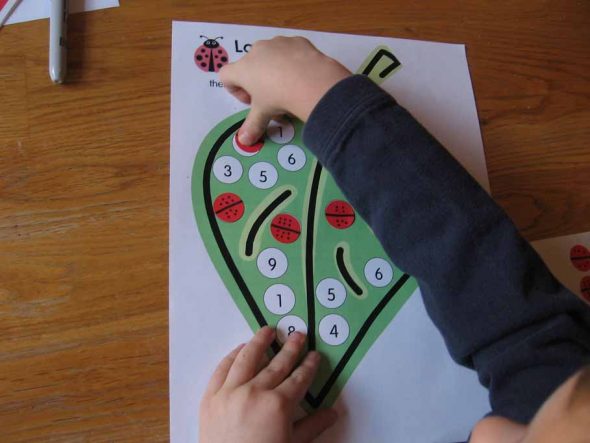 To practice number recognition, I decorated red office stickers and told my Two (pictured) which number the ladybug wanted to eat.  He covered that number with a sticker.  Because I have three kids learning to recognize numbers, I created one with the numbers 1-10, one with the numbers 10-20, and one with blank circles so I could write much larger numbers for my Five. To read more about it and get your printables, click here. 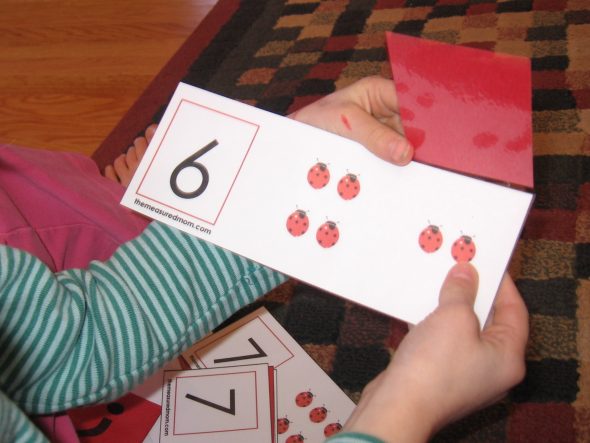 I spent a lot of time on these, and I’m so happy with how they turned out.  My Five, who resists a lot of the math I prepare for her brothers because “it’s too easy,” was challenged by these and really enjoyed them. To read more about them and download 45 free missing addend flip cards, visit here. 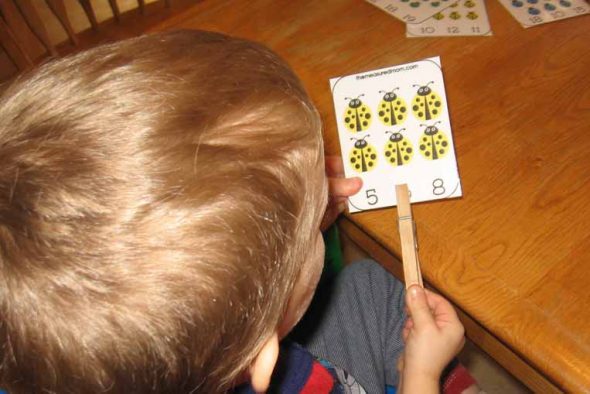 For a set of colorful ladybug count and clip cards from 1-20, visit my original post here. 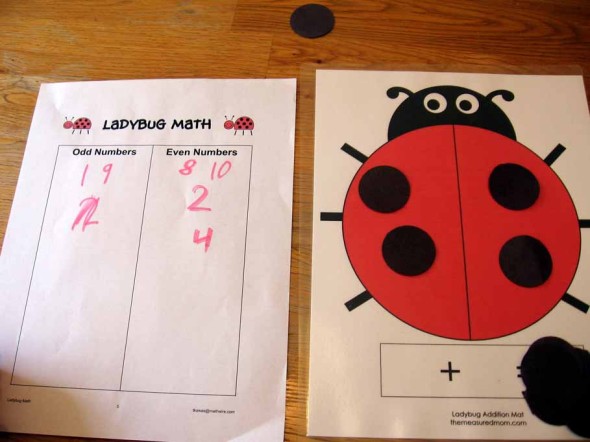 I did this activity with just my Five.  It was her introduction to the concept of odd and even.  We took out ten paper circles.  I gave her a number and told her to take turns placing the dots on each side of the ladybug. If the same number of circles was on each side, then the number was even, and she wrote it in the right-hand column. If there was an extra dot, then the number was odd, and she wrote it in the left-hand column.  After a few times placing the dots, she could figure it out in her head.  She also learned that if you can add the same number together to get a number (such as 3+3 = 6), then the answer is always even.

I highly recommend this sort of activity to introduce odd/even! You can get the ladybug printable by clicking here. 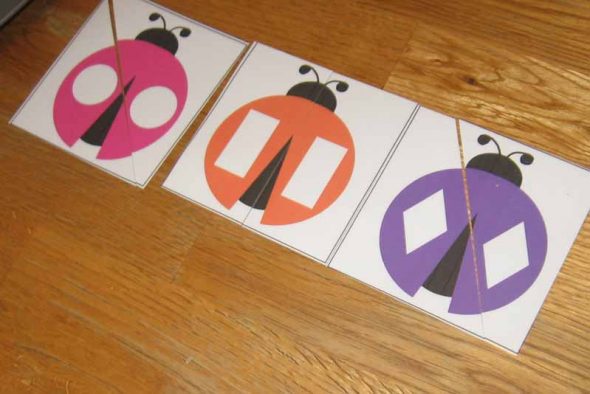 My Two did these ladybug shape puzzles.  Get your free printable from Confessions of a Homeschooler. 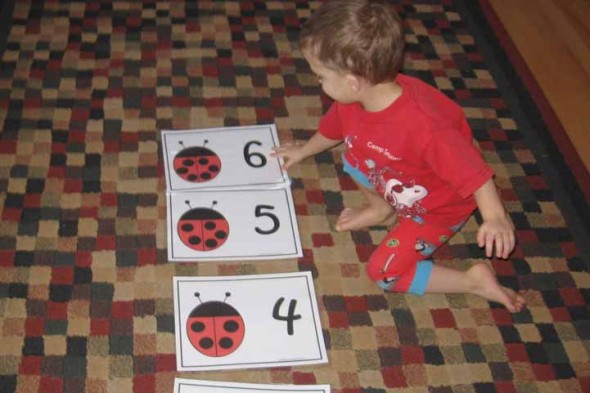 I got these great ladybug floor numbers from Playing House in Maryland.  My Two just loved them!  He can count to 10, but he gets confused if he starts in the middle. So we had to start over nearly every time he added a new number — no problem, good counting practice! This was also great practice for number recognition and the first time he worked at putting numbers in order.  Afterward his sister tried to get him to stand on a number that she called out, but he was having too much fun running on the number line.  If I showed my kids’ faces on this blog, I’d have to share the picture of him running across the ladybugs.  BIG smile! 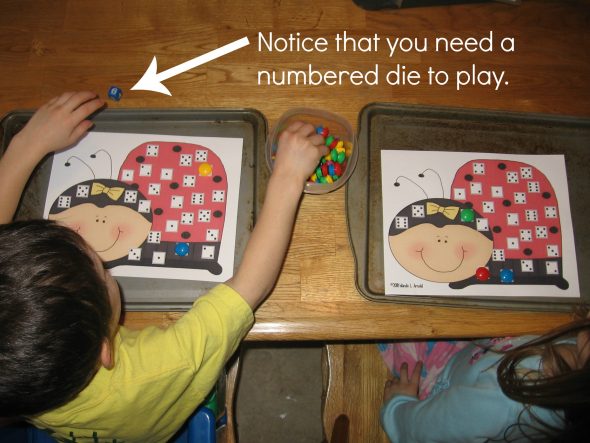 I think this board game is adorable, and I just love the concept!  You can get your own copy at Oceans of First Grade Fun.  This game requires a numbered die and counters.  Have your kids take turn rolling the die and covering that number on their ladybug. This gives them practice subitizing.  Say, what?  If you’re like me, that’s a new word for you.  It’s just a fancy way of saying: look at a group of something and tell how many there are without counting each individual item.  For example: recognizing that the six dots on a die are 6 — without going 1,2,3,4,5,6.   I played this with my Four and Five. 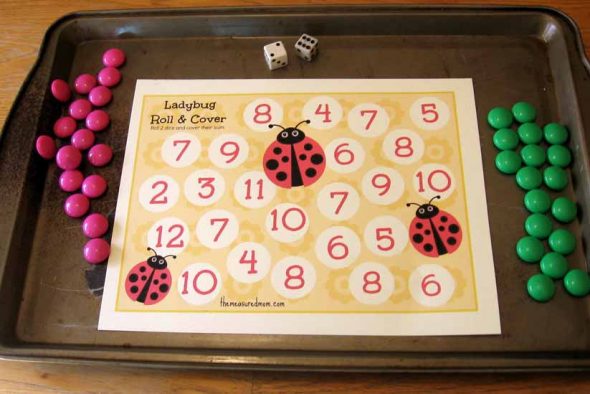 Here’s a simple board game that gives your child practice addition and subitizing.  Roll the dice, add the numbers, and cover the number on the board. To see more and get your printable, visit my original post here. 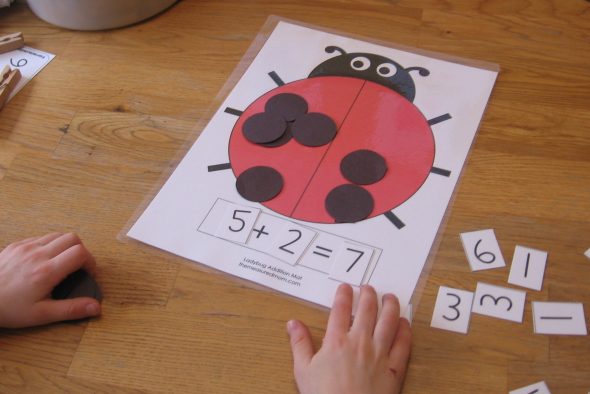 I saw this idea all over Pinterest and never did figure out who came up with the original idea.  I created this math mat (get yours here) and cut out black circles with my circle punch.  I made a set of numbers and had the big kids (4 & 5) make addition number sentences. 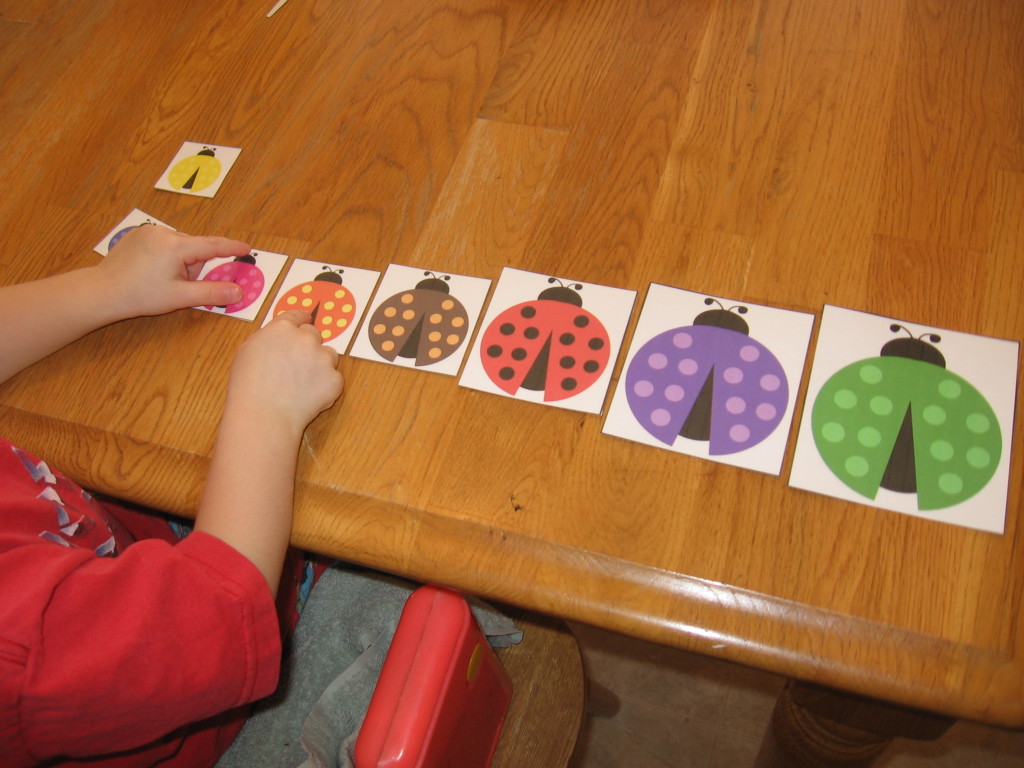 My Two loved putting these colorful ladybugs in order by size.  You can get them at Confessions of a Homeschooler.

Did you know? Members get more!

The Measured Mom Plus is our affordable membership for Pre-K to third grade teachers, parents, and tutors. Join and get instant access to 2000+ printables for building important math and literacy skills!
CLICK HERE TO LEARN MORE