Are you teaching the alphabet to your toddler? Check out these fun letter A activities for 2-year-olds! 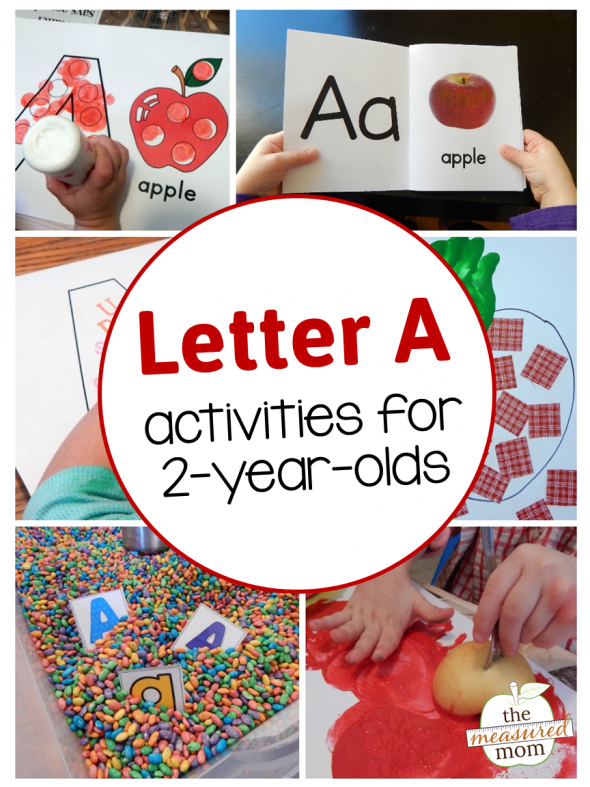 Shortly after she turned two, I began a Letter of the Week series with my younger daughter. After seeing her big sister and three older brothers do activities at the kitchen table, she was ready for her turn!

I started with A, but not because it’s the first letter of the alphabet. I began with all the letters in her name before we moved on to the rest of the letters. 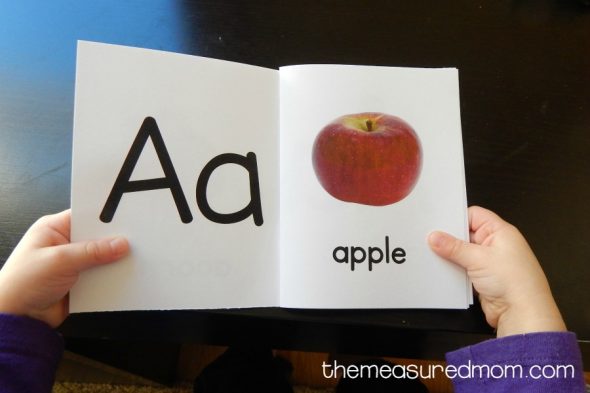 For her birthday, I’d given my toddler her own set of alphabet books. I printed the books, stapled them, and store them in a little tin lunchbox. She calls these her “ootcase books” and asks me to read them often! (Print letter A for free here.) 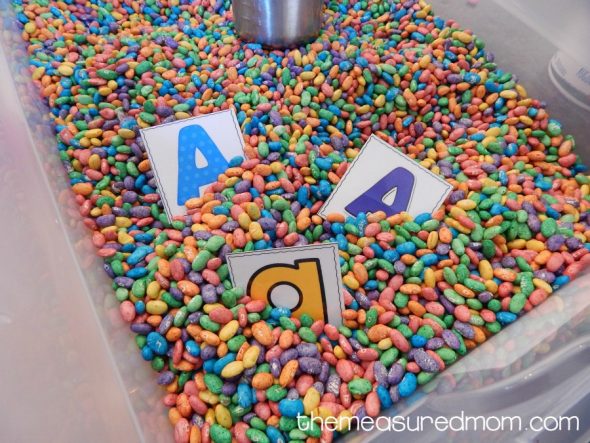 I decided to mix letter recognition with something she enjoys – sensory play. I printed a set of bright letters (get them at the end of the post) and buried them in a bin of colored beans. She and my Four had fun digging around. As they played, I talked about the letters. “Did you find an A?  Look! An A!” 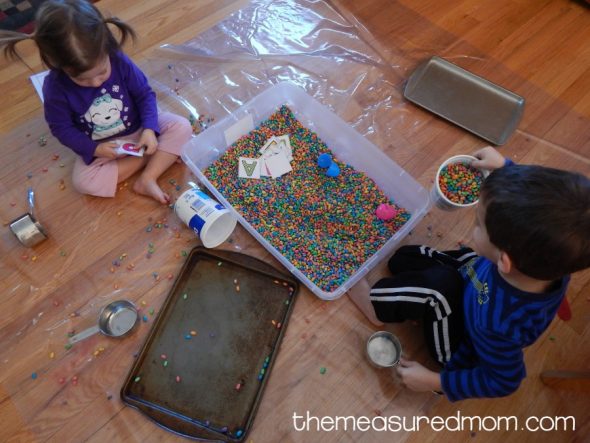 Since this was our first alphabet activity, my Two didn’t have a concept of letters. She just enjoyed digging around in the dried beans and finding the cards. But you have to start somewhere, right? 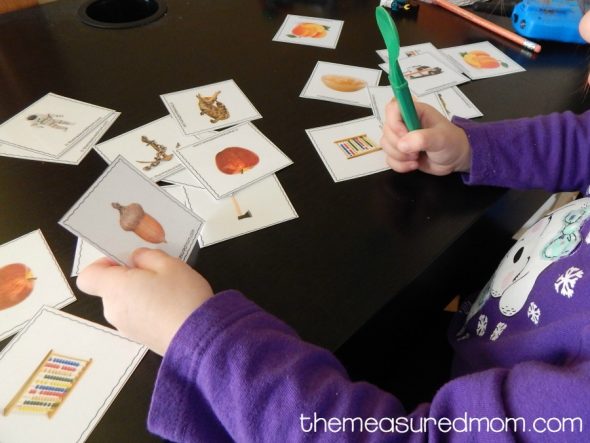 At the end of this post you’ll also find letter A pictures in the download. I printed a double set and helped my Two find matches. For the easier pictures, I asked her to find them. “Where is the apple? Can you find the alligator?” The rest were good for building vocabulary. (P.S. I changed the cards a bit, so they’re not exactly what you see pictured.) 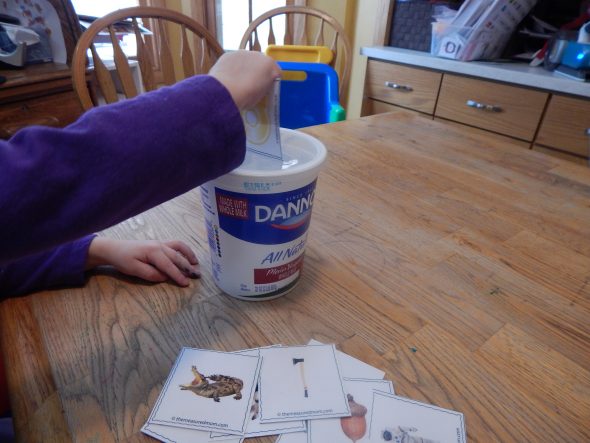 Since she likes putting small things into containers, I cut a slit in the top of a yogurt container so my Two could drop the cards inside. I talked about the pictures as she worked. 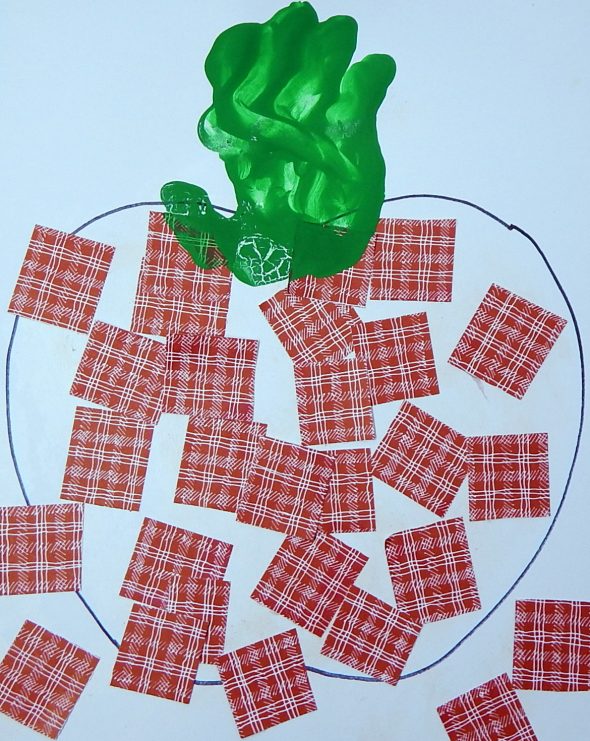 I like this craft because most toddlers enjoy sticking paper onto paper. My Two enjoyed helping me with the glue stick and pressing down pre-cut squares to make this apple. 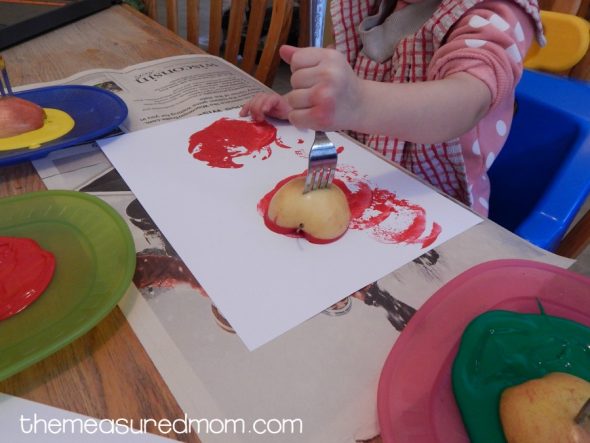 Of course we couldn’t forget the classic apple printing activity. If you try this, be sure to put a fork in the apple so it’s easy to work with. In the past, my kids have gotten very frustrated about working with a slippery apple. But this apple printing was a success! 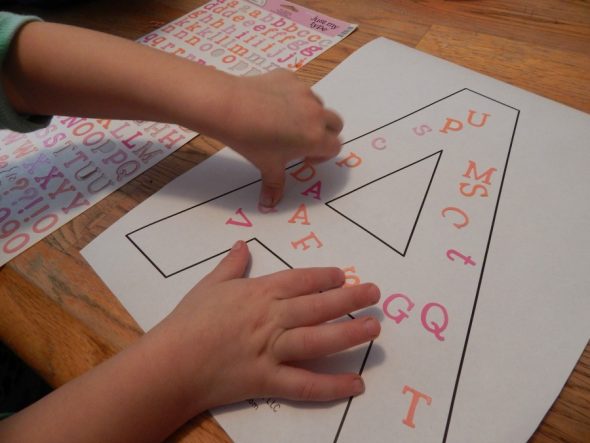 I wanted to help my Two become familiar with the shape of letter A, so I printed a block letter (get yours here) and gave her some alphabet stickers to stick inside it. 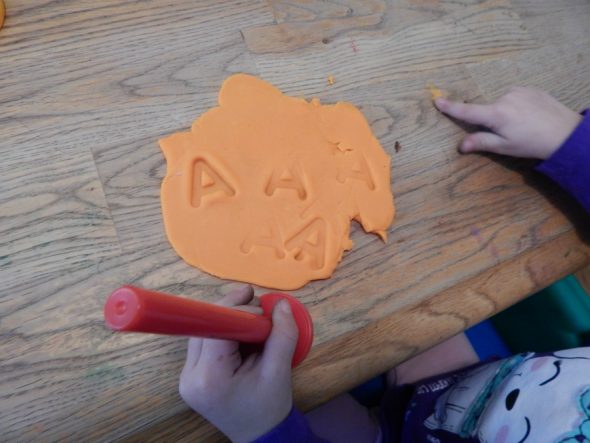 These alphabet play dough stampers were a bit pricy just for home use, but we love them! I’d definitely consider them if you teach a large group. You’ll get a lot of use out of them! 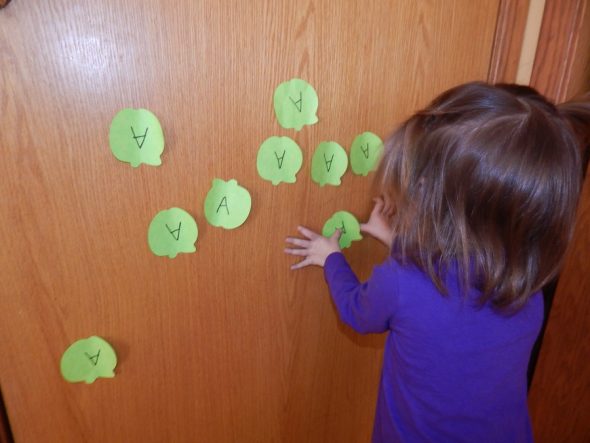 I wrote the letter “A” on sticky notes and hid them around the room (in obvious places). My Two enjoyed collecting them and sticking them to the door. I decided early in the week that we’d focus just on capital A, since she didn’t show a quick ability to remember either the upper or lowercase letter.

You can grab your printable letter A cards and photos by clicking on the link below. And stay tuned for lots more alphabet learning in the coming months!

Letter Q Activities for 2-Year-Olds Ways to Make the Letter A Free Letter V Printable: V is for Volcano
Why we need to read aloud to struggling readers
Shapes in everyday objects clip cards