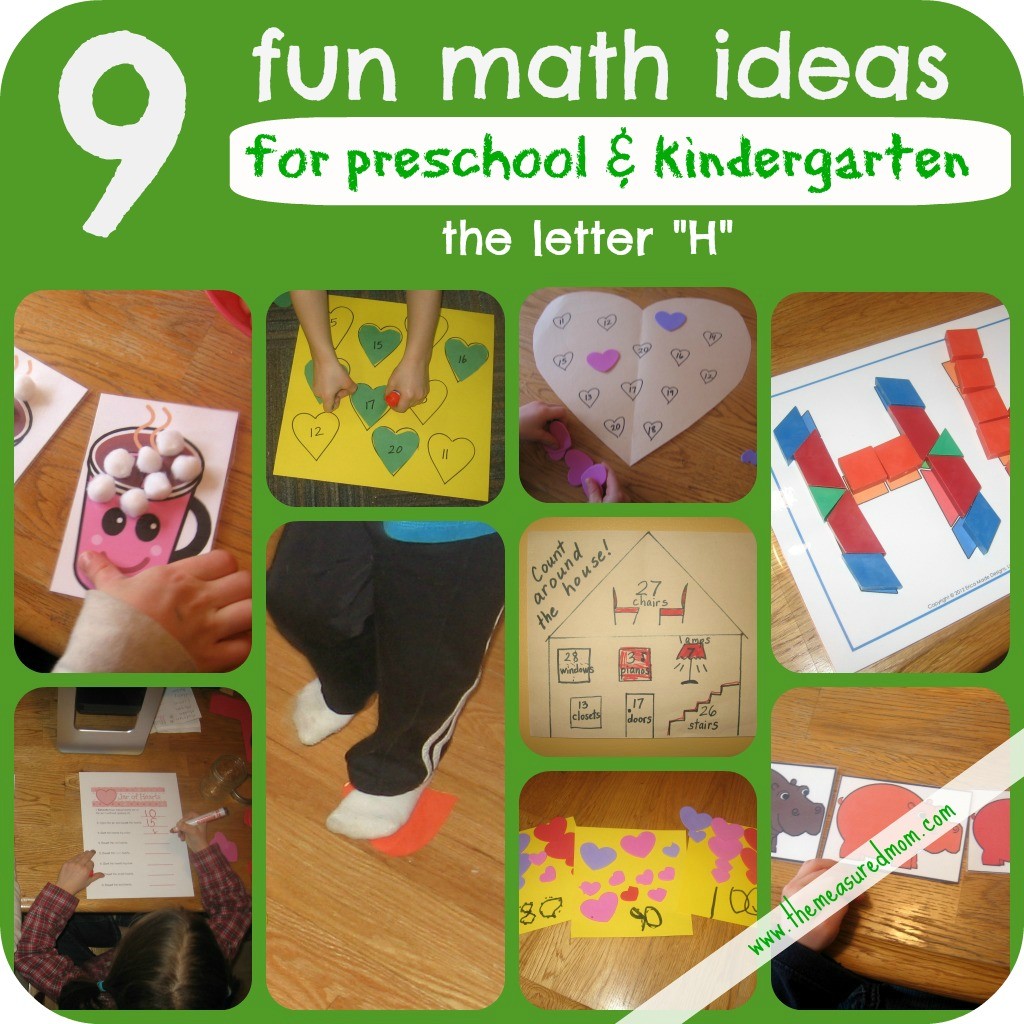 Today I have a set of letter H math activities to share! By coincidence, we were learning about the letter H during Valentine’s week.  So I found a lot of heart math floating around the internet which I’m excited to share with you.  We threw in hot chocolate, a house, and some hippos just to mix it up 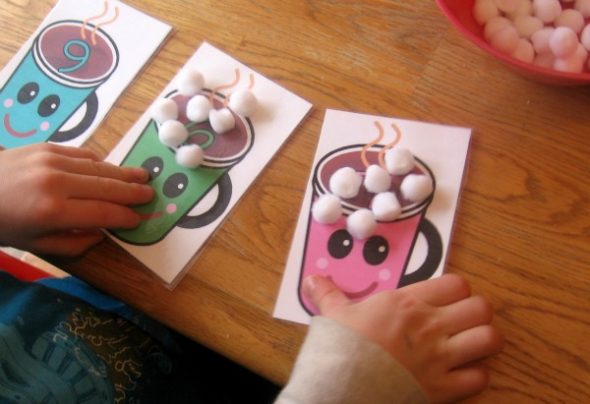 Here’s a simple, fun way to practice one-to-one correspondence. Print out these colorful hot chocolate mats and have your child put the corresponding number of mini-marshmallows on each one.  See my original post here. 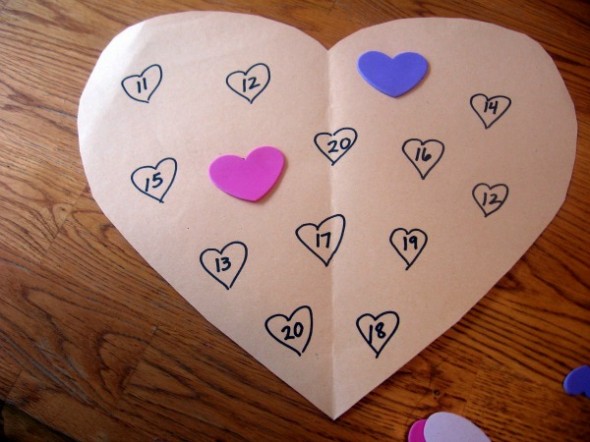 This is one of the easy but brilliant ideas you can find over at Little Family Fun.  I cut out a giant heart for my Two and one for my Four.  My Two had numbers 1-10 on his heart; my Four had numbers 11-20.  Then I called out a particular number for my boys to cover with a heart sticker.  A simple but effective way to practice number recognition.  Stickers make everything more fun. 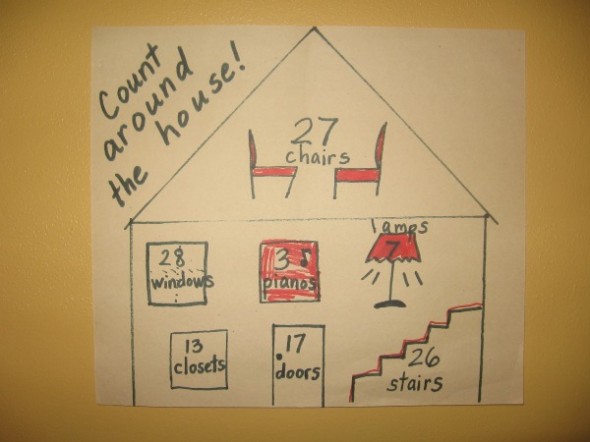 Not only is this a great math activity from No Time for Flashcards, but it’s an energy burner too. I’m always looking for those in the middle of February!  I drew a giant picture of a house and listed something I wanted my Four and Five to count.  They excitedly raced through the house to count windows, chairs, closets, pianos… yes, we do have three pianos.  You don’t really want the story behind that, do you? 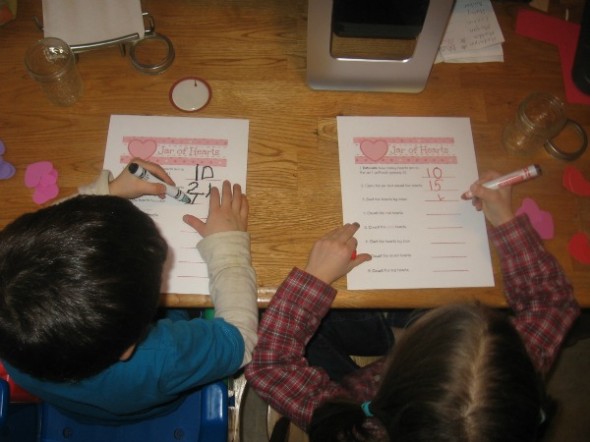 Another great idea from No Time for Flash Cards!  I took two jelly jars and filled them with foam hearts.  Then I printed the activity sheet for my big kids. First they estimated how many hearts there were. Then they counted them, sorted them — and practiced writing their numbers too.

5 – Ordering – Order the Hippos by Size 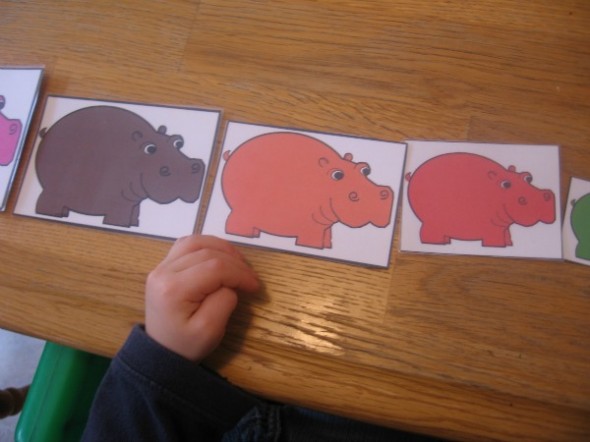 You can find a lot of hippo math for preschoolers over at Confessions of a Homeschooler.  I printed this set of colorful hippos and my Two arranged them in order from smallest to largest and largest to smallest. The last time I tried something like this he had no idea where to begin.  This time he needed less guidance.  It’s starting to click! 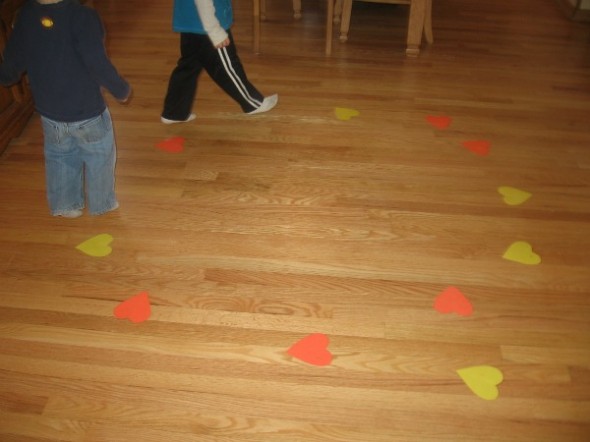 I really love this idea from Mom to 2 Posh Little Divas.  I prepared a set of hearts for my Two and Four.  If your kids are at the same level, you don’t need different colors.  But since my boys are learning to recognize different numbers, I cut out orange for my Two and yellow for my Four (their favorite colors).  On the back of my Two’s hearts were numbers from 1-10.  On the back of my Four’s were the numbers 11-20.  We put the hearts in a circle and the boys marched around them until the music stopped.

Then they each had to pick up a nearby heart and read it. If they were correct, the heart was removed from the circle.  The only problem was that my Two only knows 1,4, and 10, and he was not catching on. So the game would have gone on forever had we not called it to a stop. Next time I would focus on the numbers he knows and just one or two unfamiliar ones. 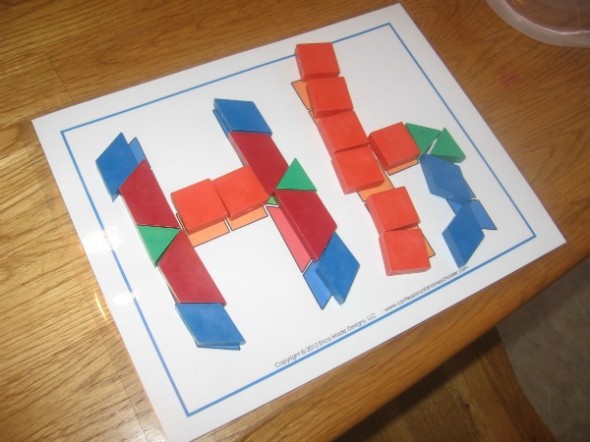 Very basic, but very cool.  These great patterns are from Confessions of a Homeschooler.  I printed and laminated the entire set.  The pattern blocks are from my teaching days, but you can get your own here. 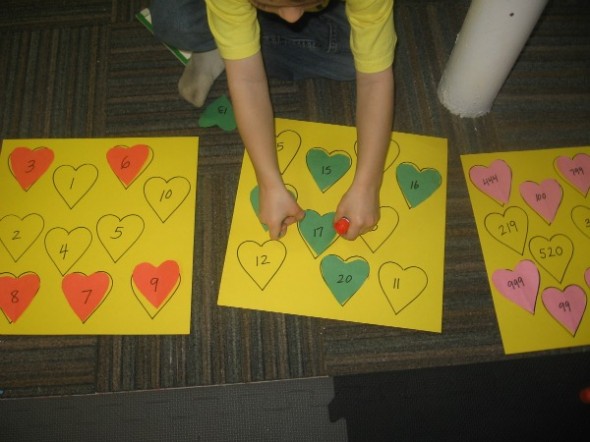 I hope you’re still reading, because of all these math ideas, this one was my kids’ favorite by far.   It took a little bit of prep time for me, but it was definitely worth it.  I used a heart stencil and traced about 10-12 hearts on each sheet of large paper.  Then I cut out the same number of hearts — in different colors for each of my kids. My Two’s board had the numbers 1-10; my Four’s board focused on 11-20; my Five’s board had numbers from 100-1000.     Then I hid the hearts all around the basement.  Each child found his or her colored hearts and glued them to the matching heart on his or her board.  They also had to read the number to me when they brought it.  This was another idea from Mom to 2 Posh Little Divas. 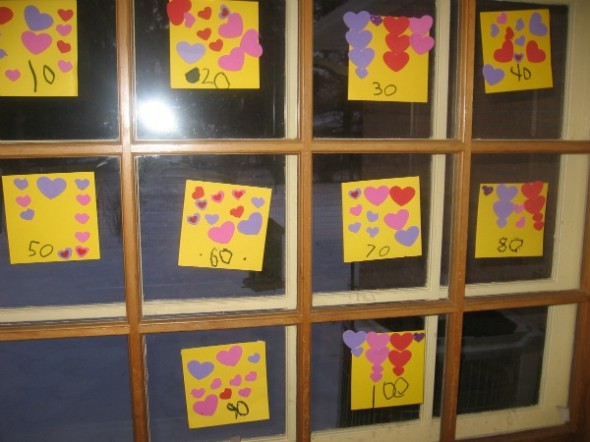 Had enough of hearts? That’s okay. Any kind of sticker will do.  We put heart stickers in groups of ten, then counted and labeled them by 10’s until we got all the way up to 100.  You can read about it in my original post here.

Find many more learning activities for letter H by clicking on the image below! 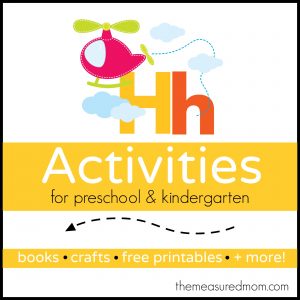