We had so much fun with these letter M activities for 2-year-olds! 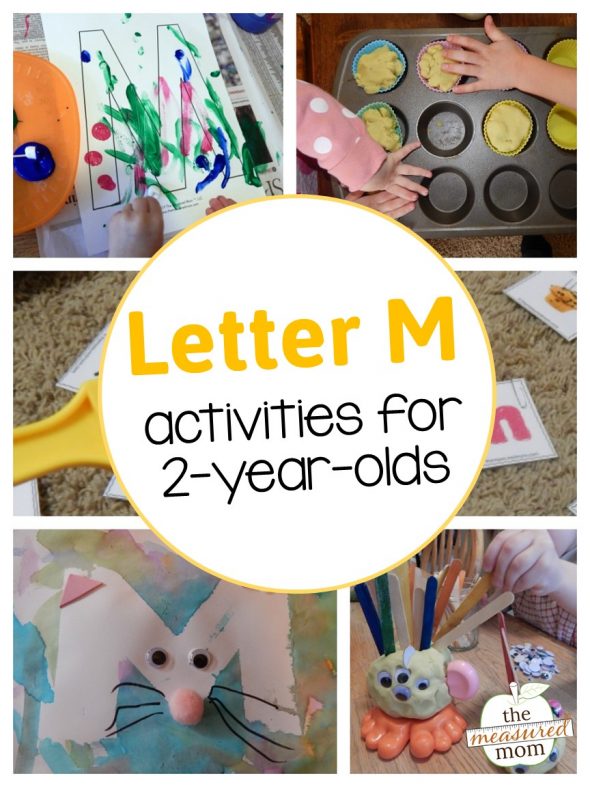 We’re doing Letter of the Week with my Two, and she’s really enjoying these hands-on activities – plus, she’s starting to learn her letters! 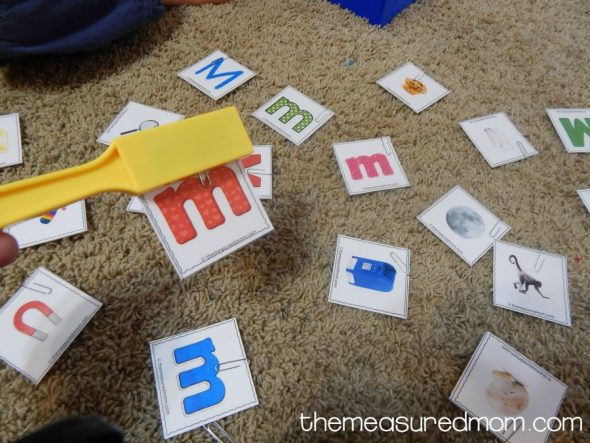 To introduce the letter M, I printed the letter and picture cards you can download for free at the end of this post. I attached a metal paper clip to each one and gave my Two a magnet wand (from this fun magnet set). She had fun picking up the cards as we talked about the letter M and the pictures. 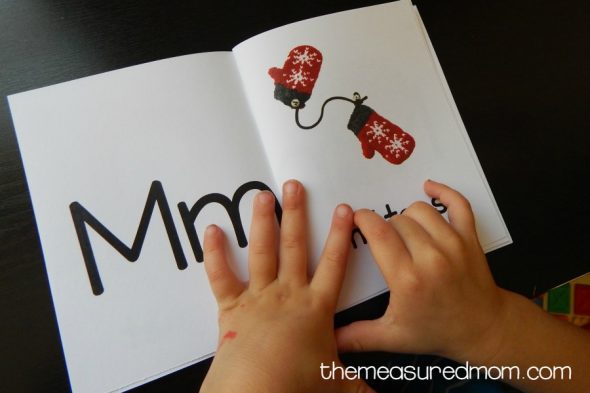 My Two loves our simple alphabet books and is happy for another chance to listen. I ask her to name the pictures and always get a giggle at some of her guesses. (in this book, she called the mouse a squirrel). Get letter M free here. 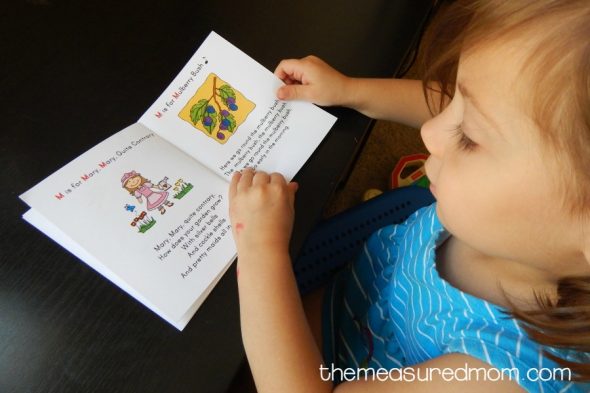 These rhyming letter books are another favorite! (Get letter M free here.) 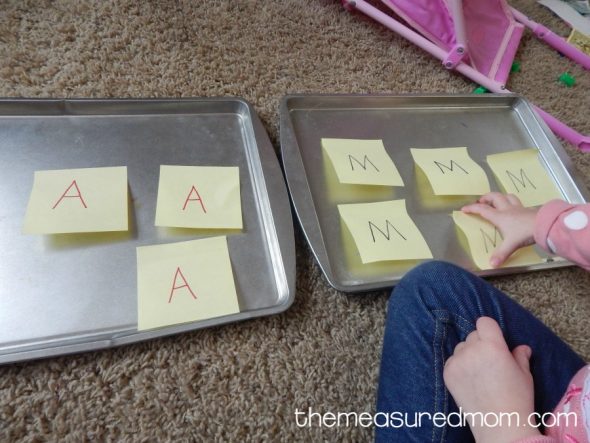 One of my goals each week is to review previously learned letters. Even though we are on letter M, this is only our second week since I’m starting with the letters in my daughter’s name. I wrote A’s and M’s on sticky notes. I showed my daughter how to sort them by putting all the A’s on one baking sheet and all the M’s on the other. Even though she can’t yet name either letter without help, it was easy for her to distinguish between them. 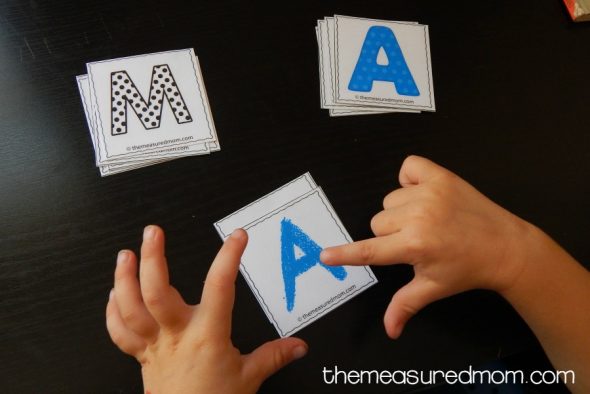 This was another fun sort. I mixed the colorful letter M’s (free at the end of this download) with the letter A’s that I shared earlier. With a little help, my daughter began to understand how to make two separate piles of letters – one for M’s and one for A’s. 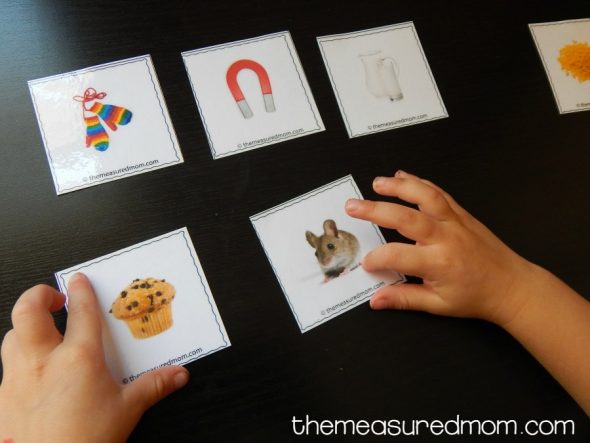 I also used the letter M picture cards as a vocabulary builder. I called out the names of the objects, and my Two pointed to them. If your child is more advanced developmentally, you could do something more challenging. “I spy something you put on your hands,” or “I spy something that you drink.” 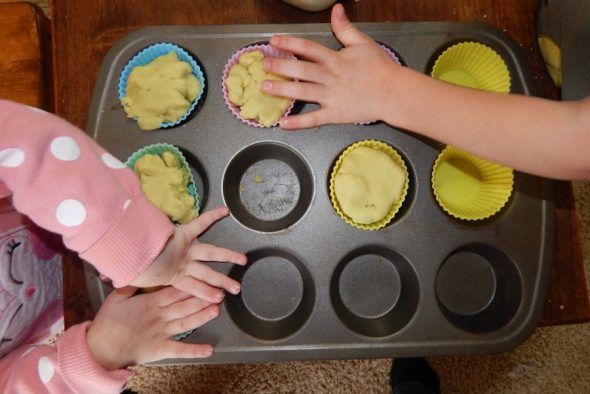 To add some sensory play to our learning, we made “muffins” out of a new batch of play dough. My Two and Four were busy with this for quite some time! 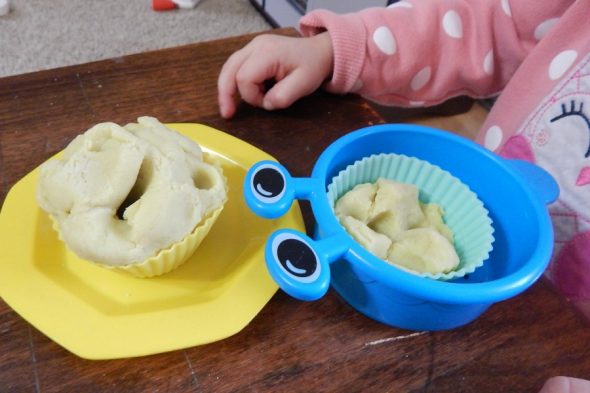 We were even able to turn into a (very) basic math activity by making big and small muffins. 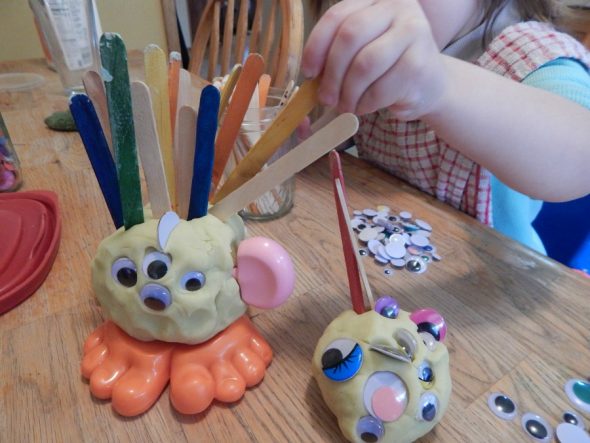 We pulled out the play dough another day and made monsters. Can you guess which one my Two made? 🙂 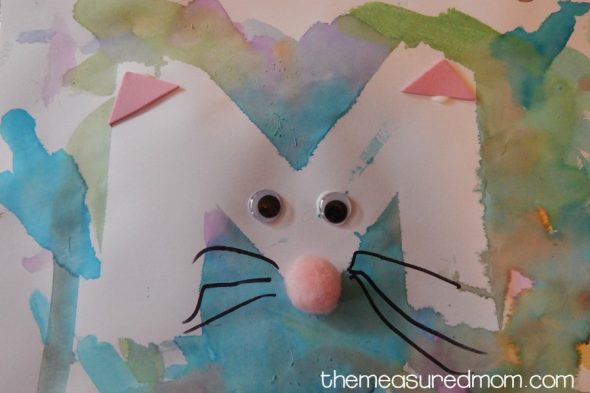 I know – this craft doesn’t look like a 2-year-old did it, but that’s because it’s a tape resist craft. I put down painter’s tape in the shape of an M, and my Two painted with watercolors around it. I did have to encourage her to paint closer to the tape; you might find that your child isn’t ready to do quite so much painting.

After it dried, I peeled off the tape and showed my toddler how to add the eyes, ears, nose, and mouth. She drew the whiskers. Get the tutorial at Mom to 2 Posh Lil Divas. 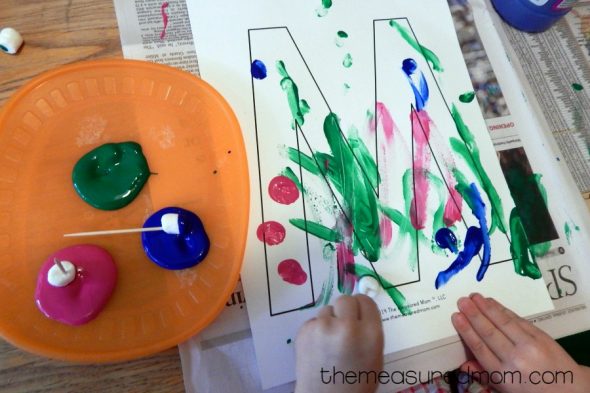 If you prefer less structured crafts, painting with marshmallows is a good alternative. I printed a block letter M (get yours for free here) and put mini-marshmallows at the ends of toothpicks. My Two dipped the marshmallows into tempera paint and went to town. 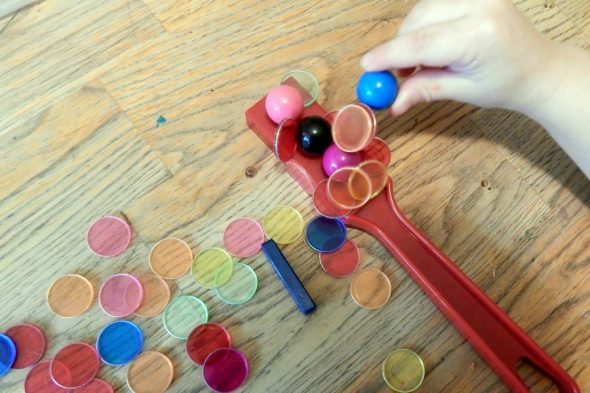 We even had a little science fun with our magnet set. Of course you won’t want to use these if your child is still putting things in her mouth, but my Two hasn’t done that for a long time.

We modified this wonderful pretend post office activity from How Wee Learn. I made the simple mailboxes, my Two decorated them, and we taped them to the wall with painter’s tape. Then my Two scribbled on paper (“Wook! I’m making wetters!”) and delivered the mail to whichever mailbox she chose. My Four was just as busy drawing pictures and delivering his own letters.

This blurry photo cannot possible communicate how much fun my Two and Four had. They were busy giving and receiving mail for an hour! In fact, before bed tonight I have to remember to put some more mail in my Four’s mailbox. He’s counting on it when he wakes up.

You can grab your printable letter M cards and photos by clicking on the link below. And stay tuned for many more alphabet activities in the coming months!