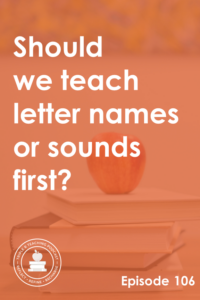 TRT Podcast #106: Should we teach letter names or sounds first?

When teaching the alphabet, should we teach letter names or sounds first? Everyone seems to have an opinion … what does the research say?

Hello and welcome to the first Triple R Teaching podcast of 2023!

My family just got back from a week-long trip to Florida, which was a very nice break from the Midwest. I do love living up here, but the dark, dreary days of winter do get long, so it was nice to get some sunshine. I wish I could've bottled it up and taken it home because now it is just so dark and dreary outside, but I am really thankful we were able to get away for a little while. However, I'm really excited to be home because home is my happy place. I love the work I get to do at The Measured Mom and on this podcast.

So we're back to work, and today we're going to talk about a very sticky subject in education, because people have very strong opinions on it, and that is should we teach letter names or letter sounds first?

Now, if you ask this question in a Facebook group, any Facebook group connected to early childhood, watch out! People on both sides of the aisle have very strong opinions. Many of them will tell you their side is backed by the research.

There was a recent Reading League event that I went to, and I got to hear Dr. Steven Dykstra speak in person, which was wonderful. I love watching all the things he shares online. He's got just a great perspective. He joked that if you put these two groups of people in the same room, they're going to break out in fistfights. I think he was only sort of joking. This is a very hot topic. It's definitely one where people feel very, very strongly.

So who's right? Should we teach letter sounds or letter names first? I think it might be helpful to start by looking at the arguments for each side of this debate.

And letter names are the only stable property of a letter. So the shape of the letter changes depending on whether it's upper or lowercase or a different font. The sound sometimes changes because letters can often represent more than one sound, especially when used in combination, but the name never changes.

The fact is, though, despite what claims you may hear, there's not a lot of really strong research to tell us exactly what to do first. However, there is some research that's starting to tell us it seems that children do well learning both letter names and sounds at the same time.

Before we talk about that, we should really talk about why even teach letter names at all. Is there any purpose? Couldn't we just teach letter sounds and save ourselves the trouble? That's a fair question because, strictly speaking, you would not need to know letter names to read. Interestingly though, a preschooler's knowledge of the names of printed letters is a strong predictor of success in learning to read. That's been shown many times in research.

Many people will say that's just correlational because if a preschooler comes from a home where the parents are teaching them things and talking to them about letters and reading to them, of course they're set up to be a good reader later on. Unless there's a learning disability, they are set up to be a good reader. Therefore it makes sense that those kids with those actively literate parents who are teaching them letter names are going to be better at learning to read later on.

However, David Share and his colleagues found way back in 1983 that letter name knowledge has a greater effect on reading success than other variables, including socioeconomic status or even how much parents read to their kids. I'll be sure to link to a bunch of articles in the show notes so you can check them out for yourself.

Now, exactly why knowing letter names is a good predictor of reading success is still up for debate. There is an article by Share, another article that you might want to read that's in the show notes, that helps give some possible ideas, but I don't think we really know for sure.

Another reason to teach letter names is that research clearly shows that learning letter names helps students retain letter sounds when the letter name contains its sound. I mentioned that earlier, but that is definitely backed by research.

Another reason to teach letter names is because they're important labels for letters. Now you might say, well, I could just use the letter's sound as its label. So for the letter S, we could just call it /s/. However, this becomes confusing because many letters, like the letter C, have different sounds. It can also be confusing when the letters are combined with other letters, for example in digraphs, because then they make a brand new sound or just the sound of one of the letters.

Based on the reading that I've done and the research I've studied (I'm going to link to it all in the show notes), my conclusion is that we should teach letters and sounds concurrently beginning in preschool. I feel that there is a strong enough research base that explains why letter names are important, but I also know that focusing on letter names alone for too long is not really going to be helpful for learning to read. They have found that preschoolers can learn both letter names and sounds concurrently at the same time, and so I think that that's the best approach for preschool and kindergarten teachers.

Now, I don't think it has to be a problem if you want to spend a little time teaching letter names first to get those solid and automatic. Some people would say that's the way to go, but if you would do that, I wouldn't want to spend a ton of time on it, like as in not more than a few weeks in kindergarten, for sure. Preschool may be a little bit longer of a time.

You may know about Marilyn Adams' alphabet curriculum. She's an amazing researcher, she's phenomenal, and she has been around for a long time. I'm pretty sure in her curriculum she starts by teaching letter identification before teaching sounds at all.

When you think about it, a lot of kids come to us already knowing lots of letters, letter names, because their well-meaning parents have taught them to them. They talk about them when they see them in books. They've got letters on their refrigerator. That's a good thing!

I feel like I've heard some people lament this, that if only parents wouldn't teach kids letter names before they come to school. I think we should celebrate it because it's showing that there's an interest in literacy and learning, and that's fabulous.

Really, most kids who come from a literate background, come to school with some alphabet knowledge, so I think we should work with what they come to us with. I think that we should use that alphabet knowledge they have to be an assist when teaching sounds.

So I think that the best approach to teaching the alphabet is to teach letter name, sound, and letter formation at the same time.

Now, what should this look like? How do we make this engaging? What does review look like? This is just the first in a series about teaching the alphabet, so stay tuned. We're going to talk about more things very soon.

You can find the show notes for this episode at themeasuredmom.com/episode106. Talk to you next time!

Get on the waitlist for my course, Teaching Every Reader

How to structure the reading block in a science of reading classroom What order should we teach the letters of the alphabet? Science of Reading Q & A: #1
Should we teach letter names or letter sounds first?
What’s the best order to teach letters?