We hope you find some fun activities to try in this collection of letter P activities for toddlers! 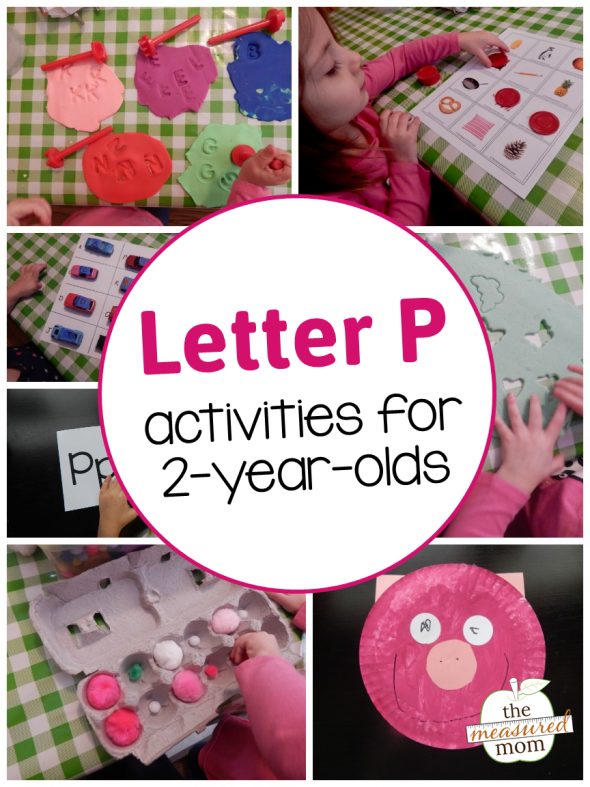 Have you been following along as my two-year-old learns the alphabet?

She asks for “tivities” almost every day, but we aren’t able to get to our activities as often as I’d like.

You know how it goes … I need to catch up on housework, or I need to do some blog work, or I decide to focus more on teaching my preschooler.

Or maybe it’s a week of a teething baby, older kids home sick from school, or just a tired mama.

Because life happens, we don’t do Letter of the Week every day. Usually we do activities 2-3 days a week. 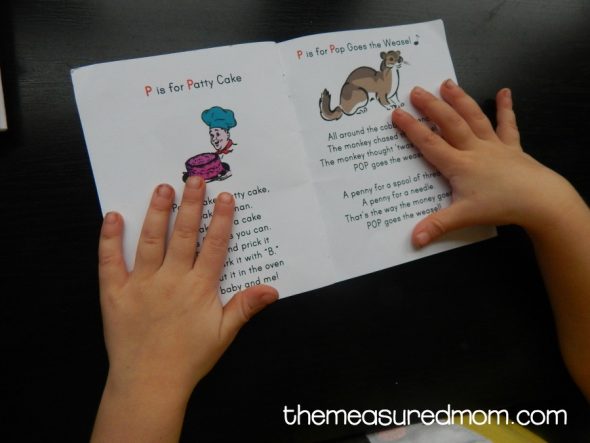 Several years ago I created these rhyming letter books. In fact, I created them even before I began blogging, because I wanted to help my song-loving 2-year-old learn the alphabet.

It worked! He carried the books around in a little tin lunchbox and asked me to read them many, many times.

That two-year-old is six years old now, and a fluent reader.

Thankfully we have another two-year-old who loves them almost as much! 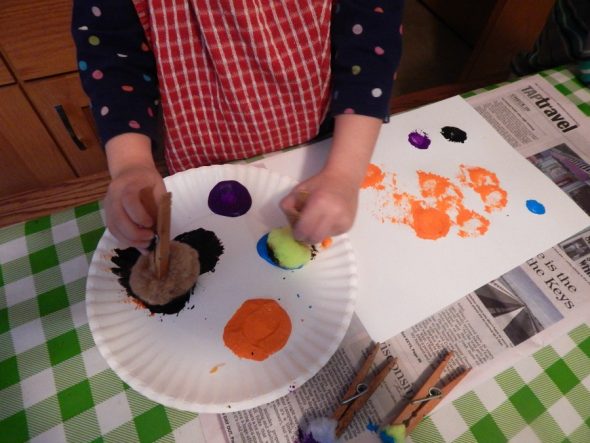 We pulled out our big stash of pom poms and did some simple painting. I clipped clothespins to several pom poms and invited my Two to dip them in paint and make prints. 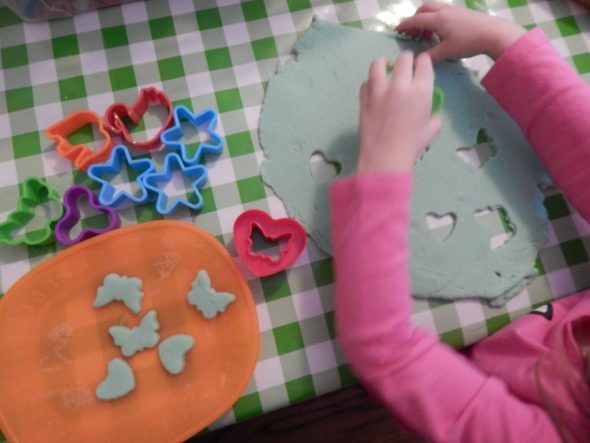 Of course we needed to make a new batch of play dough for letter P week! I used this recipe and added mint extract to make it peppermint play dough. My Two and Five were both busy with the play dough for at least 30 minutes. I call that a win. 😉 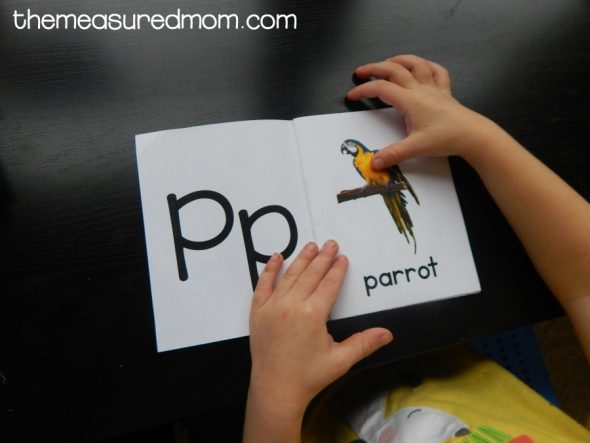 Here’s another set of free books I created a couple of years ago. I usually ask my daughter to help me read them by naming the pictures. Such a great way to build vocabulary and reinforce the letter’s sound! 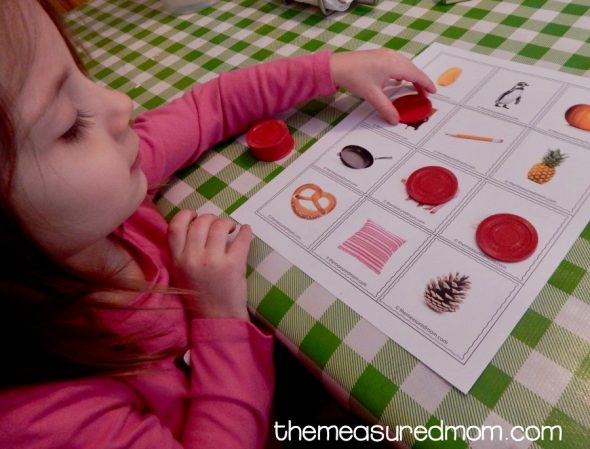 I printed our letter P picture cards (get them in the download at the end of this post) and named each picture. My daughter covered each one with a poker chip as I named it. Afterward, I asked her to name each picture herself and cover each one as she named it.

She didn’t want to.

Rule number one of Letter of the Week with a toddler: Don’t push it. 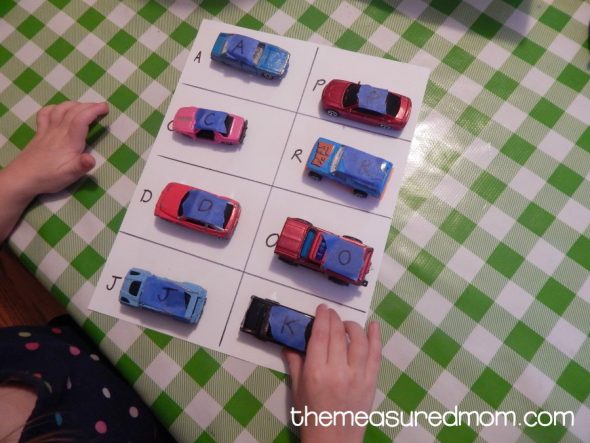 This was a great review activity. I wrote the names of letters we’ve learned on a simple grid that I drew on a piece of cardstock. Then I labeled toy cars with the same letters using painter’s tape.

My Two drove each car into the correct parking spot. 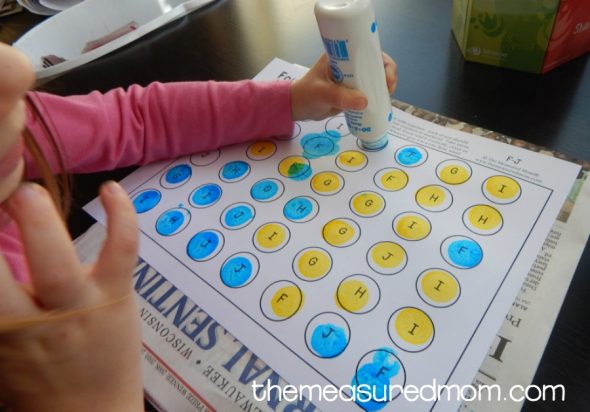 We also did this letter review activity. It’s a Four-in-a-Row game that I created at a reader’s request. My Two isn’t ready to use strategy (or even to count four circles in a row), but she still had fun taking turns naming and dotting letters with Do-a-Dot markers. 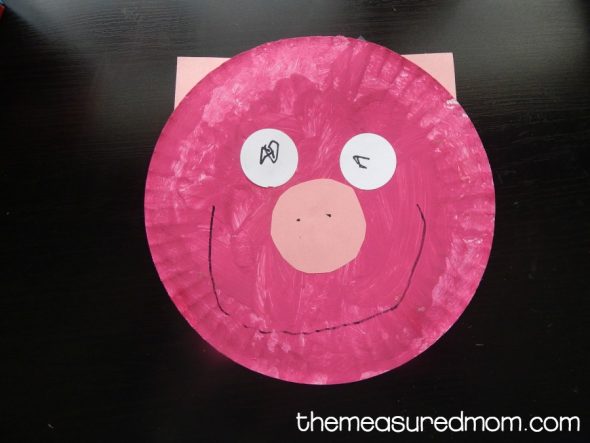 What a cute project for a toddler! My Two painted the paper plate one day. Another day, when it had dried, she drew pupils on the circles I cut out, drew dots on the nose, and a line for the mouth.

Then she helped me glue on the pink triangles.

What a pretty pig! 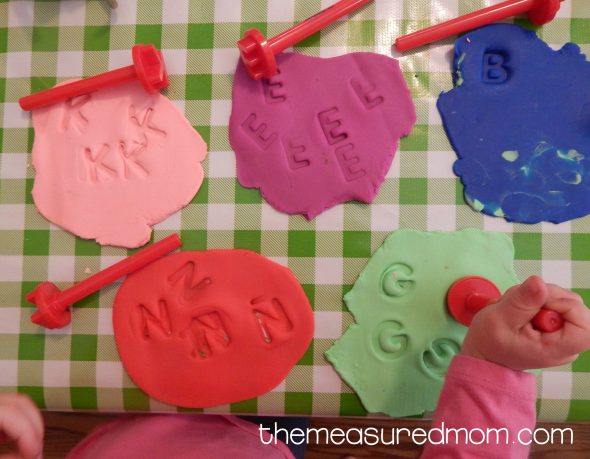 Since we didn’t get do whole alphabet activities for letter O, I was sure to get a bunch in this week. Here’s another one.

I rolled out some colorful play dough and stamped each one with a letter stamp (see the letter B in the upper right corner). Then my daughter grabbed the stampers and made more of each letter on the play dough. 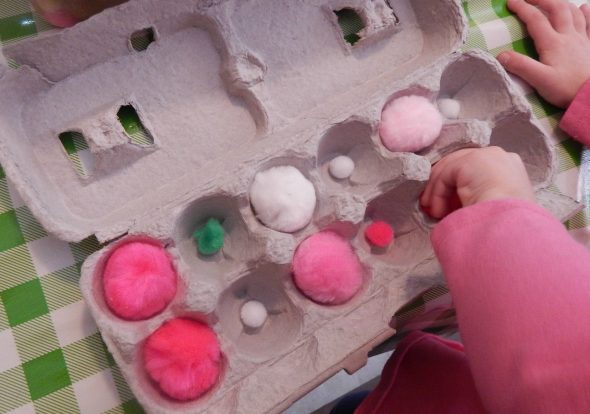 We haven’t done a lot of math activities in this series because my Two isn’t ready for too many math concepts.

But I thought we could try very simple patterns for letter P week. Somewhere I read that using an egg carton can be helpful when introducing patterns for the first time.

So I grabbed an egg carton and our pom poms. I told her we’d make a pattern of BIG, little, BIG, little.

The egg carton trick worked! She caught on to this right away. 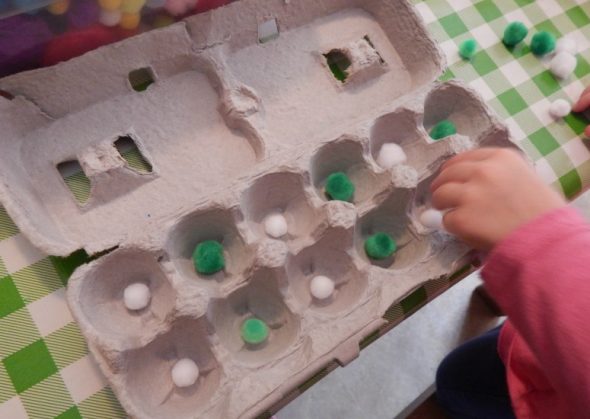 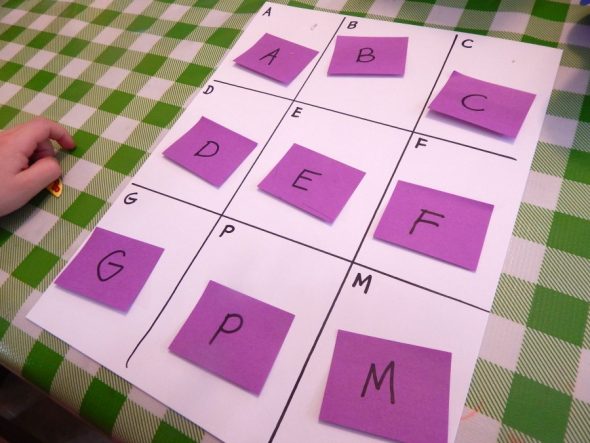 Here’s one more review activity. I drew a grid on paper and labeled it with letters we’ve learned. Then I wrote the same letters on purple post-it notes. My Two matched each one to the correct spot on the grid. As she worked, we named the letters. If she didn’t remember the letter’s name, I reminded her.

And there you have it! Stay tuned for letter Q.

Get your free printable letters and pictures in the link below.

Get your free letters & photo cards!