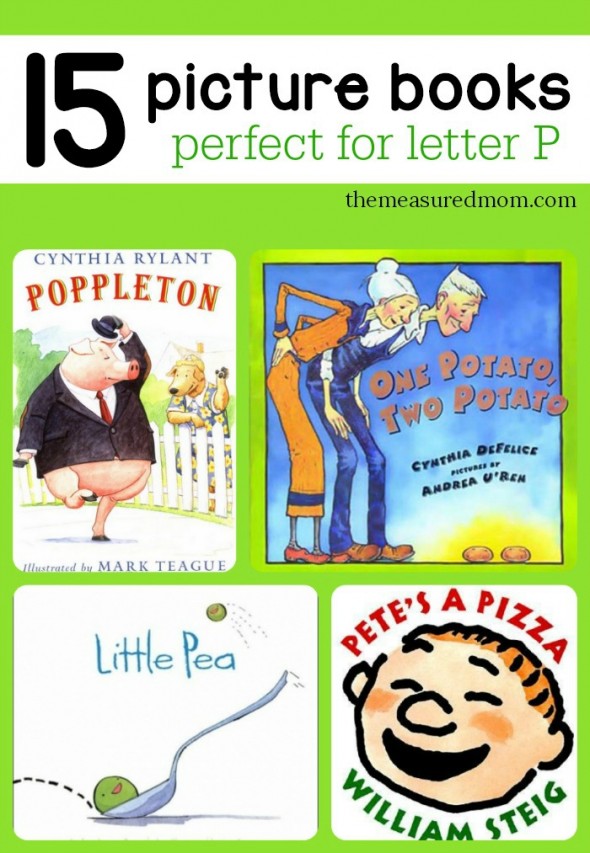 When I discovered this treasure of a book last year I filed it away as one that had to be part of our letter P book list!  This may just be my favorite children’s book ever.

Mr. and Mrs. O’Grady are a dear old couple – poor, but content.  Mr. O’Grady digs up one potato from their garden each day.  The two “call it breakfast, lunch, and dinner, and consider themselves lucky to have it.”  But one day, when he digs up the last potato, Mr. O’Grady also discovers a giant kettle.  It’s a magic pot – that doubles anything you put into it.

Such a wonderful story!  It’s long, but even my two-year-old wants to hear it again and again.  If you’ve never seen it, do check your library!

I adore the Poppleton series, and my only complaint is that Rylant seems to be done writing Poppleton books.  He is such a likable pig, and the stories are so funny.  Like the time that Poppleton’s friend Hudson the mouse tells him that eating grapefruit is the secret of living to 100. The grapefruit is so sour that Poppleton’s lips turn inside out.

“Stop eating grapefruit, Poppleton!”
“But I want to live to be one hundred!”
“With no lips?!”

Mark Teague’s illustrations (he also illustrates the How Do Dinosaurs series) really add to the appeal.  I love Poppleton so much I’ll even pick up on his adventures to read to myself when the kids aren’t around.

Tacky the Penguin, by Helen Lester

This is a funny story about a penguin named Tacky.  Unlike the other penguins (Goodly, Angel, Neatly and Perfect), Tacky doesn’t walk in a straight line, does cannonballs, and wears outrageous clothes.  He’s an embarrassment to the other penguins – until hunters arrive.  It turns out that Tacky’s odd ways come in handy!

This is a sweet story about a family of portly pigs who are having potatoes for dinner.  It’s a simple counting book told in rhyme.  A favorite!

This is such a fabulous, clever book!  My Two couldn’t get enough of it.  Little Pea has a very happy life with Mama and Papa Pea… except at mealtimes.  Because you know what you have to eat when you’re a pea, right?  Candy, candy, candy.   And Little Pea just can’t stand it.

But when Little Pea finally cleans his plate he gets his favorite for dessert… spinach!  We also love Little Hoot (about an owl who doesn’t like staying up late) and Little Oink (about a little pig who doesn’t like getting messy).

This is another of my Two’s favorites. It’s a short little book about Percy, a porcupine who loves balloons. But as you can imagine, “porcupines who love balloons are soon sad little porcupines.”  How will Percy keep his balloon from popping?  He’s got a clever solution.  We also enjoyed Hugs from Pearl, about his older sister

I’ve praised James Marshall’s fairy tale books before, and each one is as good as the last.  Marshall’s humorous illustrations and storytelling style make a winning combination. We own this one; it’s been loved so much it’s in pieces. 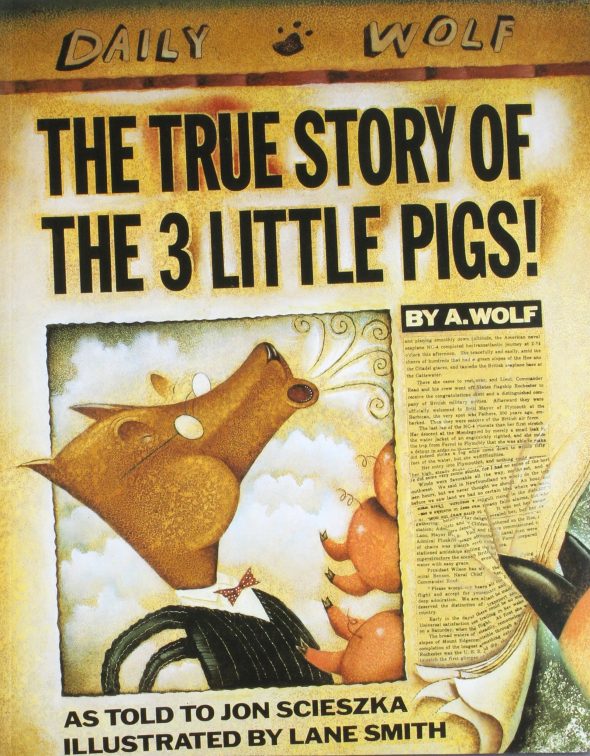 The Tue Story of 3 Little Pigs, by Jon Scieska

He’s not really a bad wolf.  He just needs some sugar for his granny. And when the pigs insult him, he sneezes, and — “the pig was just lying there, dead as a doornail.   So I ate him up.  Think of it as a big cheeseburger just lying there.” When I was a first grade teacher I printed the words up as a Reader’s Theater and had each of my students read lines in the microphone for their parents.  It was hilarious!

Because of the subtle humor, I’d recommend this for older preschoolers.

Piggies, by Audrey and Don Wood

This is  a quick, fun book that your toddler will love because of the vibrant pictures.  It doesn’t take long to read the words, but you’ll have to stop and study the funny piggies on each page.  A favorite!

If You Give a Pig a Pancake, by Laura J. Numeroff

This is part of the popular If You Give a Mouse a Cookie series.  The story itself isn’t anything special, but the pictures are priceless.

Pete’s a Pizza, by William Steig

Pete is having a bad day. He wants to play baseball with his friends, but it decides to rain.  So his dad cheers him up by making Pete into a pizza.  He rolls him around as he kneads the dough, sprinkles him with flour (talcum powder), covers him with pepperoni (checkers), and bakes him in the oven (the couch).  Fun story! 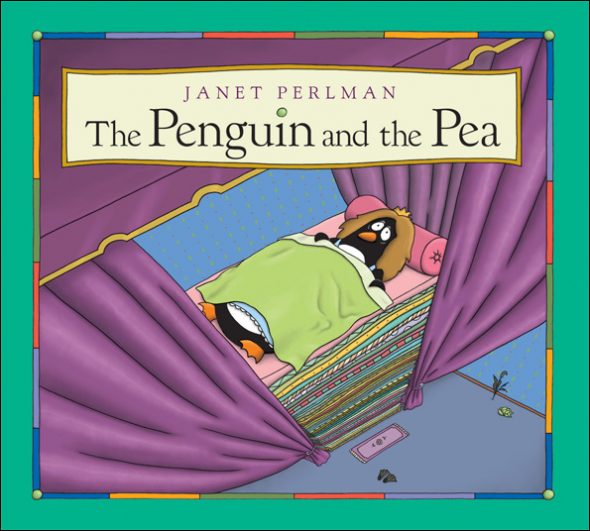 The Penguin and the Pea, by Janet Pearlman

This is a silly take on the classic Princess and the Pea.  I like that the Prince and Princess fall in love after spending time together instead of the “love at first sight” stuff you find in most fairy tales.

Too Many Pumpkins, by Linda White

When she was young, Rebecca’s family was so poor that they ate pumpkin after pumpkin.  Now a white-haired older woman, she can’t bear the sight of them. So when a truck accidentally drops a pumpkin in Rebecca’s garden, she won’t even look at it.  But after growing season she’s astonished to discover a whole garden of big, beautiful pumpkins.

Rebecca makes the most of it, and we love what happens next.

This was a book I enjoyed reading aloud as  a teacher, but not so much as a parent.  Lily is an independent little mouse who receives sparkly red boots and a purple plastic purse which plays music. She can’t wait to show them off at school to her classmates and favorite teacher. But when she doesn’t put her things away as she’s told, her teacher confiscates her purse. Lily is angry and writes a mean note.

Later, she apologizes and makes things right.   I love Kevin Henkes books, but the repetition can get tedious.  Also, Lily’s mean words (“big, fat, ugly teacher”) aren’t always the types of things I want to read aloud to my preschoolers – who can find enough mean things to say without my help!  But the book still deserves a place in this list.

Yes, another pig book.  Wendell’s mother has given up on trying to get him to keep his room clean.  “Fine, Wendell.  If you want to live in a pigsty, that’s up to you.”  Wendell is thrilled – he can live however he wants! When pigs come and take residence,  it’s not so bad.  At first.  But when they squash his basketball and leave hoof prints on his comic books, Wendell decides it’s time to take action.  We own this and have read it many, many times.