We had so much fun making rainbows and robots that it was hard to stop!  We hope you get a chance to try one or more of these in your home or classroom.

Can we say coolest kid craft ever?  My husband supplied us with some scraps from his tool bench.  I helped my Four glue down the CD case and applied the hot glue for the rest of his robot.  He added all the detail with a Sharpie.  And the coolest part?  The CD case opens and closes to reveal the robot’s inside parts!  Get a tutorial and supply list for this fun robot from The Art Annex.

My creative four-year-old actually claims nearly every roll when it’s empty, so I was lucky to grab a toilet paper roll for this craft!  He loved the final product, but I actually had to do a lot of it for him.  A challenge was getting the top to stay on… we never did figure it out!  See a tutorial for this rocket at Crafty Morning.

Have you ever painted with glue, salt, and watercolor?  Such a cool effect!  Just make lines of glue for the shape of a rainbow (I did this for my Two and Four).  Then put it on a baking sheet and dump salt on it.  Tap the extra salt off, and get out your watercolors.

When you touch the salty glue with your paintbrush, the paint will start to bleed down the glue.  My Two wasn’t patient enough for this and pressed his paintbrush into the glue, leaving a somewhat sloppy effect.  My Four eventually got the idea.  My Seven was home and had to give it a try, too.

I just love this!  My Two made this rainbow craft with some help from me, but he did most of it himself.  If you think putting those stripes on the R takes a lot of crazy cutting and trimming, you’re wrong.  Get the tutorial for the letter R rainbow at No Time for Flashcards.  We added some clouds just for fun.  If you want a pattern for the letter R, check out my giant printable block letters.

Okay, truth?  I’m not a big fan of The Rainbow Fish book.  I’m just not.  You can read why in my letter R book list. But one great thing about that book is that it’s the inspiration for a lot of fun art projects — like this fish that my Two made using a coffee filter, spray bottle, and aluminum foil.  This was a great craft to do together because he needed me for the cutting.  But he did the rest himself, and it was excellent fine motor practice to glue on those tiny hole punched circles.

Get the tutorial for this coffee filter rainbow fish from Juggling with Kids.

This was part of an entire Letter of the Week craft series that I did with my kids about a year ago at Crystal and Comp.  Hop on by to get the tutorial and free pattern for this colorful rainbow craft.

R is for Rabbit 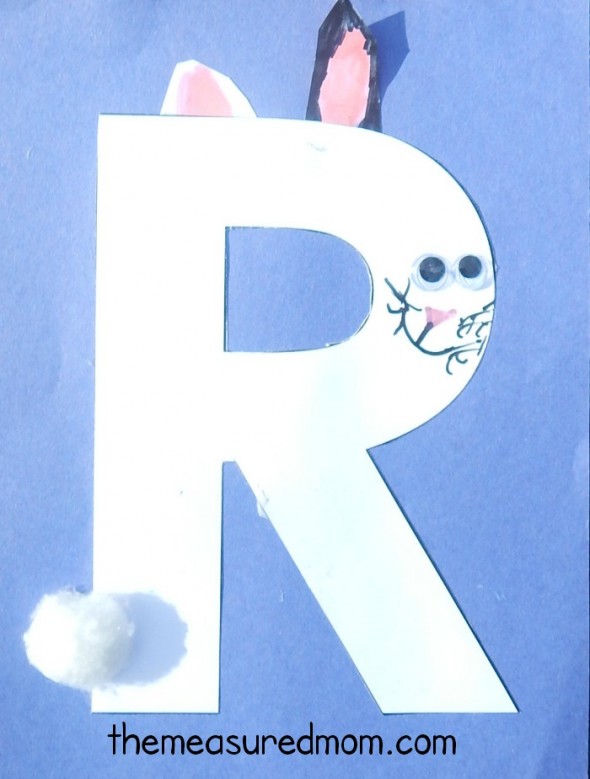 This letter R rabbit is all over Pinterest, so I won’t try to find the original creator!  You can make this as simple or complex as you’d like depending on how much you do for your child. I gave my Four the R, a cotton ball, googly eyes, marker, and glue. The rest was up to him! 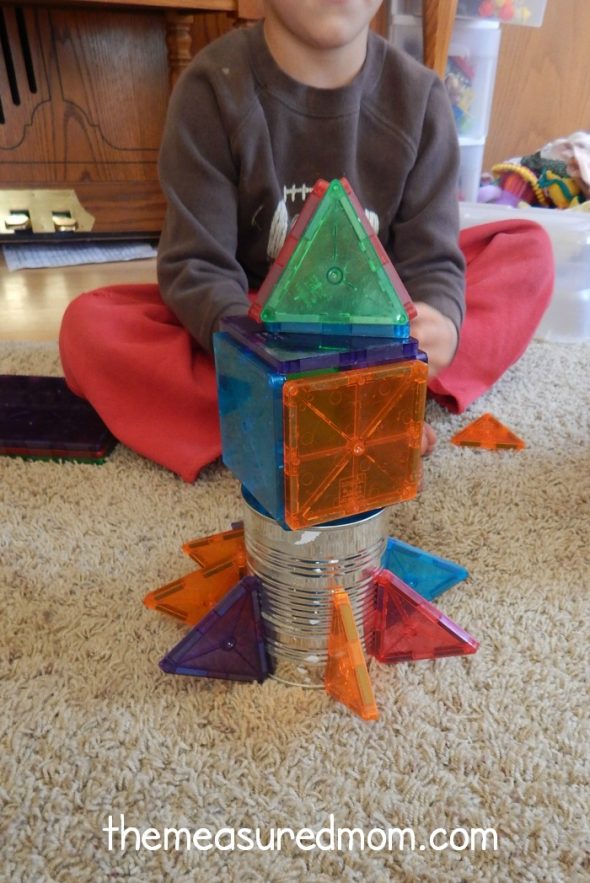 When my boys saw this awesome rocket from And Next Comes L, they had to make their own.  Magna Tiles are our priciest toy, but they’re so worth it.  You can do so many things with these well-made toys… including make a rocket with a pineapple can!  Fun stuff. 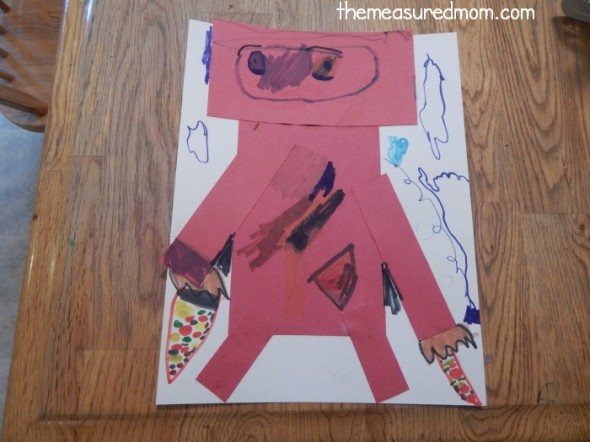 My Four may not get the prize for the most Pinterest-worthy crafts, but he does get the prize for independence and creativity!  I gave him the rectangles, and he created this robot with a glue stick and some markers. It’s holding pizza. 🙂  You can learn more about it and get a pattern for the rectangles at Love to Play and Learn. 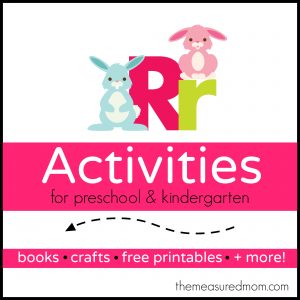