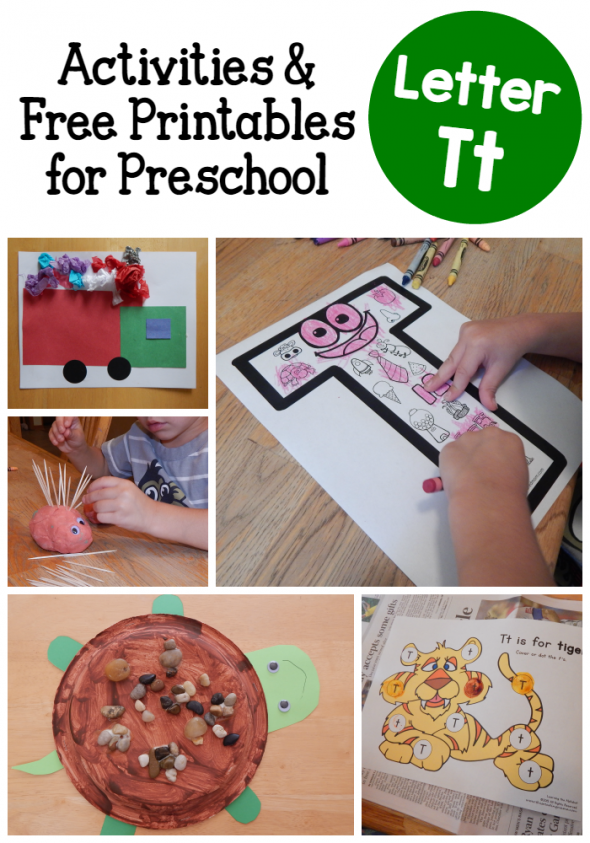 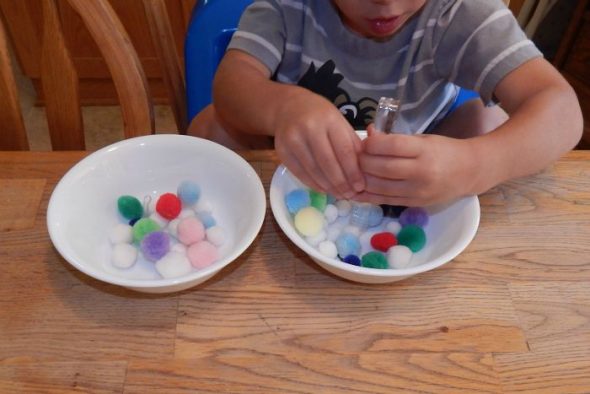 Fine motor is a struggle for my Three, so I wasn’t sure he’d have the patience for this tongs transfer activity.  I put pom poms in bowl and asked him to transfer each one with a tongs.

He loved it and stayed with it until every last pom pom had been moved! 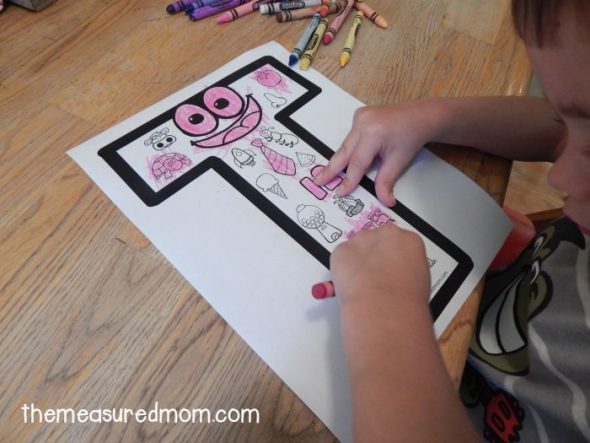 I’m working at updating my beginning sound coloring pages with these goofy smiling letters.  I hope to have them  available in both upper and lowercase within a month!  Again, I was surprised that my Three stayed with this activity until the end.

I sat next to him, helping him name each picture and stressing its beginning sound.  He had trouble with “train” and “tree” because of how he says the words.  “Chrain” and “chree” don’t sound like they start with /t/.  🙂  It was a good opportunity to practice his speech, and he had it figured out in the end. 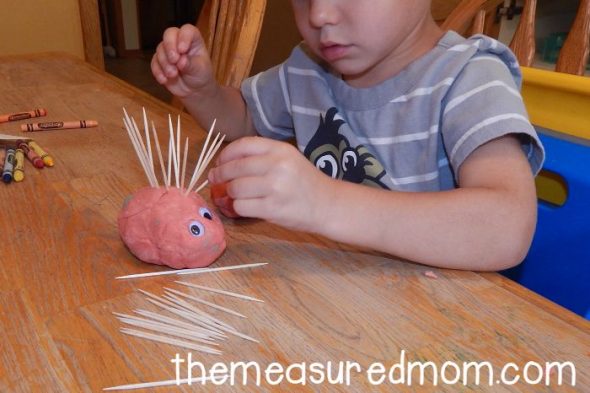 This was a fine motor and sensory exercise in one.  We grabbed a ball of homemade play dough, added some googly eyes, and created a little porcupine using toothpicks. 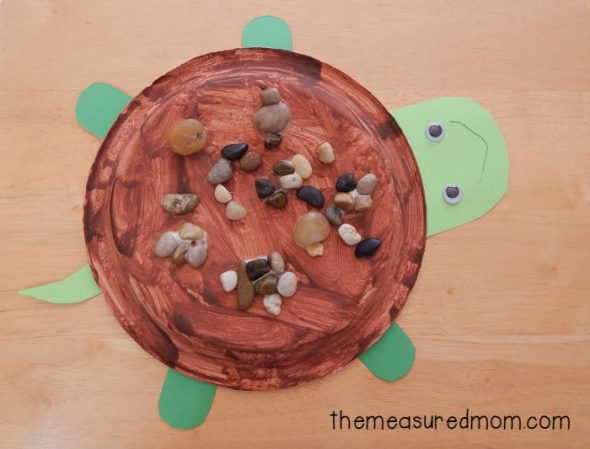 I just love how this turned out!  My Three painted the paper plate one day.  After it had dried, he used craft glue and craft rocks to make the pretty shell.  I cut out the green pieces, and he made the turtle’s face.  This adorable turtle mosaic is from Busy Bee Kid Crafts. 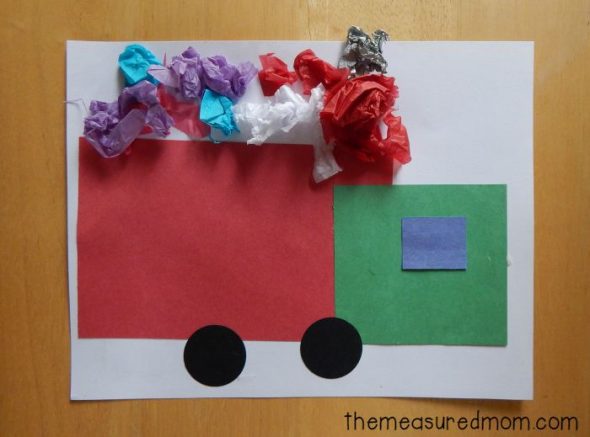 This dump truck craft was a great shape recognition activity.  He crumpled tissue paper for the garbage.  The idea for this craft came from Crafty Crafted. 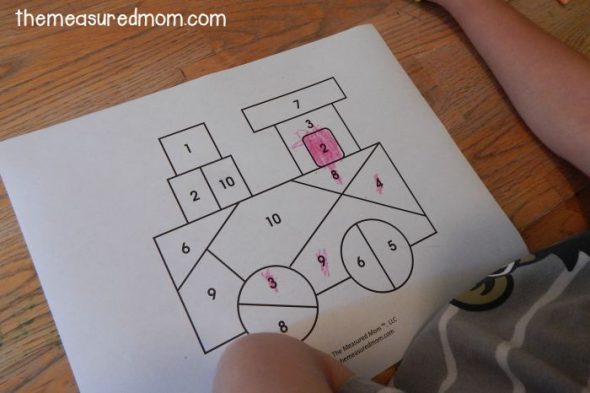 For a math activity, I printed our train race coloring game.  As it turned out, he really wasn’t into this.  He didn’t want to color the entire sections as I called out each number.  So he just colored on top of each number.

This was not a big surprise, as coloring (while he enjoys it) is still big work for him.  I offered to let him cover the numbers with stickers, but he preferred to use his crayon. 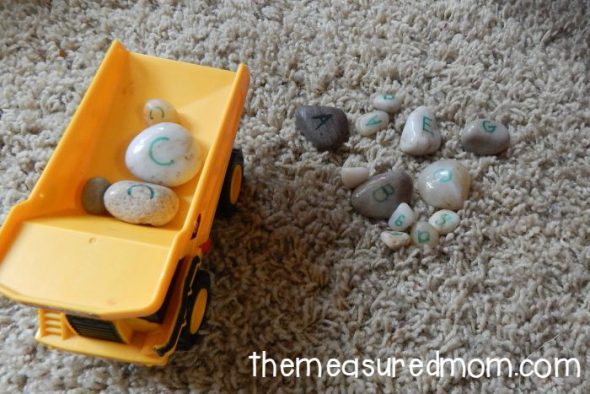 This whole alphabet activity was perfect for letter T week!  Since my Three recognizes all of the alphabet, we focused on beginning sounds rather than naming the letters.  Learn more about this dump truck alphabet rock activity at Mom Inspired Life. 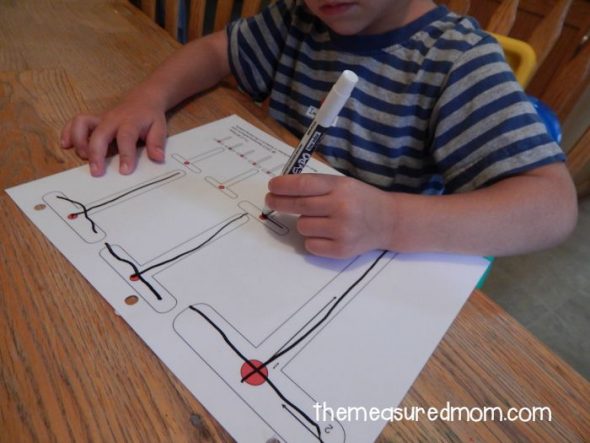 For the first time, I pulled out my beginning handwriting pages with my Three.  I thought that letter T was a good place to start since it takes just two straight lines. He amazed me by doing this page all the way down to the smallest letter and asking for several more.  I think the draw was that I had laminated the pages and had him use a dry erase marker to write on them.

You’ll notice that he doesn’t have the correct pencil grasp yet.  We’re not stressing about it, but I’m starting to gently introduce the correct grasp. What you see in the picture is where I got him to be after he began using the modified tripod grasp.   (My Five grasped a pencil correctly beginning at age 1 1/2, so this has been interesting for me!) 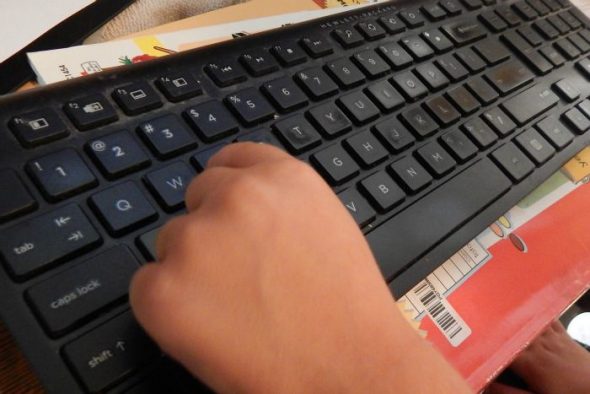 He’s always asking to type on the computer, so this week I gave him a turn.  He loved to spell his name and press random letters until I told him it was time to give someone else a turn.

Here are some of our favorite books for letter T!  Just click on each book cover to learn more about it.

More links and free printables for you 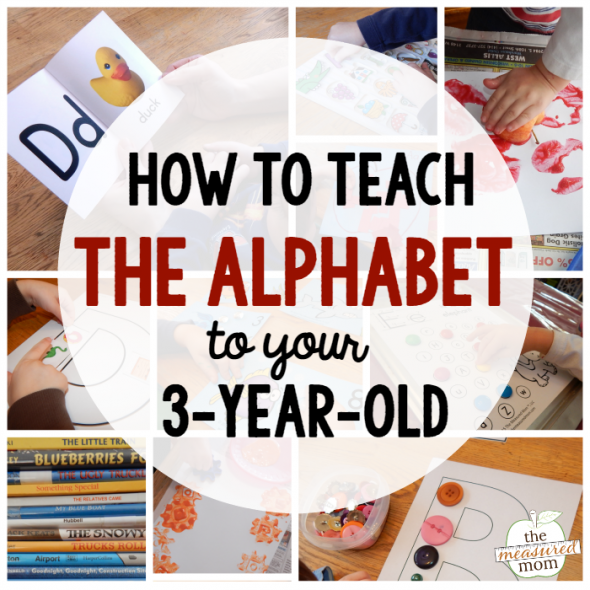