Have you seen my Word Study series?  You can find each part here:

I’ve just begin teaching my soon-to-be-first-grader using the Word Study approach.  By keeping spelling time relaxed and mixing it up with sorts and games, I’ve been able to make spelling fun (most of the time ;)). 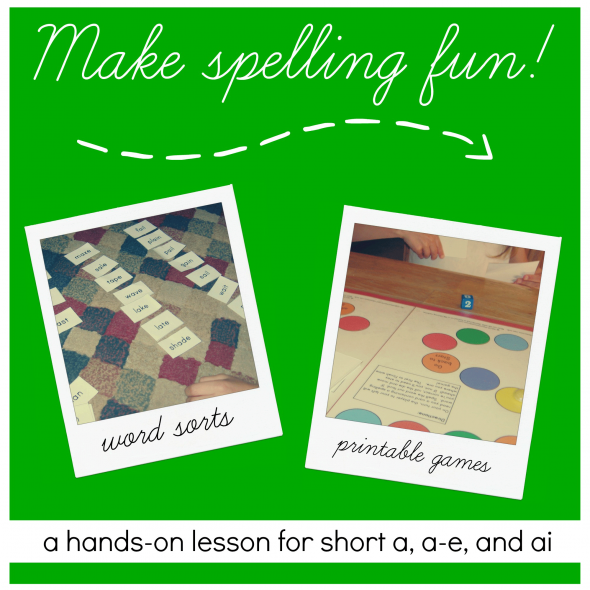 My Six is at the beginning of the Within Word Pattern stage of spelling development.  (Woah – did that just fly over your head?  It’s not as complicated as it sounds.  If you want an explanation, check my post that explains how kids learn to spell.) For her first lesson, we looked at short a words and a-consonant-e words.  This week’s sort was trickier because we added ai words.  Today I’ll break down the lesson and share printables at the end of the post.

1- Choose and prepare a word sort.

When I taught Word Study in the classroom, and now when I teach it at home, I type the words into a simple table and print them. My daughter cuts them apart and stores them in a plastic bag.  We sort them many times throughout the week.  How do I choose my words? I use this fabulous book as a resource

I look at the suggested word lists in the back, tweak a bit to give me 20 words, and type it up.

2- Introduce and practice the sort. You can put headers above the words to show what the patterns are. I didn’t use them this week, but if I had they’d have said “short a,” “a-consonant-e“, and “ai.”  If I were doing this in a classroom, I’d have called back the spellers who had were in the same word study group, demonstrated the sort, and had them all practice it at a small table or on the floor. 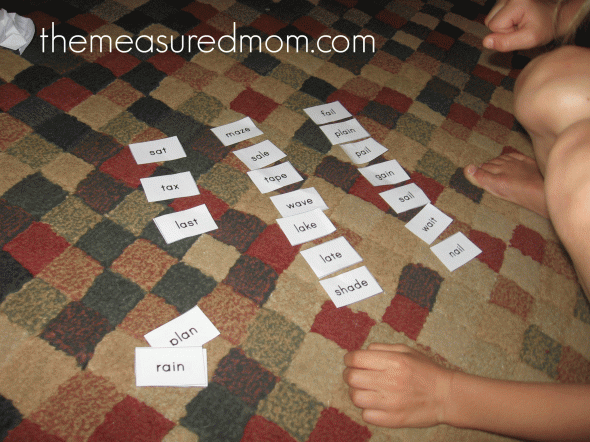 Have your child(ren) read the words while sorting — and then read them all again at the end.  This would be a time to catch mistakes. If your child doesn’t see her mistake, explain it and help her to put the word in the correct column.  Guide her to explain how she sorted. In this case she might say, “I have short a words, long a spelled a-consonant-e, and long a spelled ai.“

3 – Copy or glue the words into a Word Study notebook.

This gives even more opportunity for sorting!

4- Practice the word sort in different ways throughout the week. 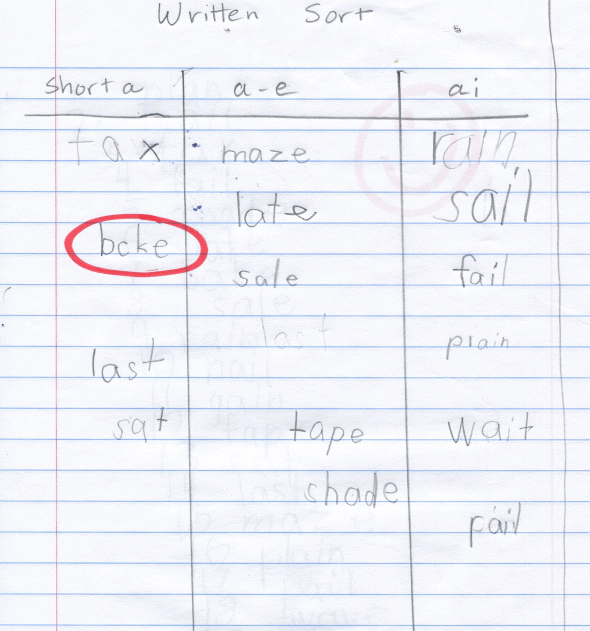 After a few days I had my daughter do a blind written sort: I read the words to her, and she had to figure out where they went and spell them.  At this point she had not grasped the patterns yet.  As you can see, “bake” had her confused.  If she’d remembered the pattern (a-consonant-e), she would not have thrown that extra c in there. This was great for me to observe because it showed me what we needed to work on.  In a classroom, you’re a little more pressed for time – but at home, you can stay with a list until you feel your child has fully grasped it.  (Confession – this list took more than a week!)

We played my homemade game, Spell It, several times – it’s a printable spelling game you can adapt to use with any word list: just change the word cards.  You can get it in my download at the end of this post. 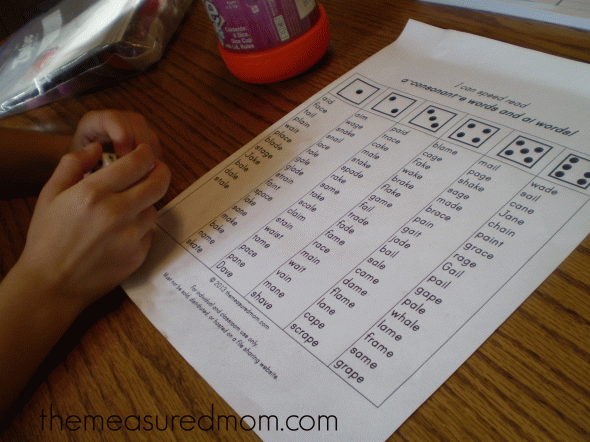 My daughter isn’t a big fan of speed reading words that match her word study pattern (translation: she doesn’t like it!), but I think it’s important for her to recognize these words in isolation so that she can read the patterns automatically. I don’t do a lot of isolated phonics work with my kids, but I think this is a quick and simple way to get it done. We take turns rolling the die and speed reading the list under that number. 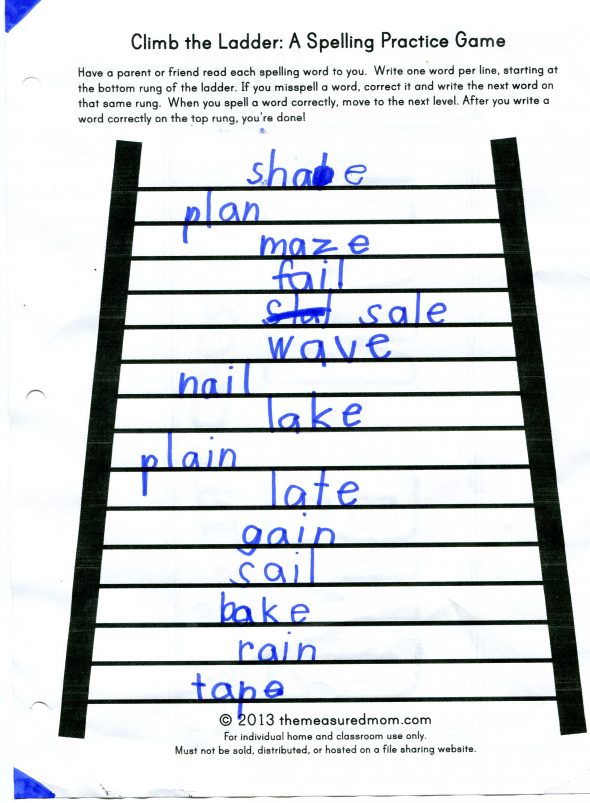 When I thought my daughter was close to being test-ready, we played this game.  Unlike the previous game, Climb the Ladder is a favorite.  She had to write each word as I called it, starting on the bottom line and moving up.  If she got a word wrong, she had to write another word on the same line. You’ll notice that I focused more on the tougher words — by this time I knew which words were giving her trouble.  It was great to watch her puzzle out the spelling.  This time, when she wrote bake, she said to herself… “B – a – consonant. That’s k.  Then e.”   Obviously, the goal is automatic spelling. But it’s also great when she can internalize the patterns without drill and worksheets.   Have I mentioned how much I love Word Study? 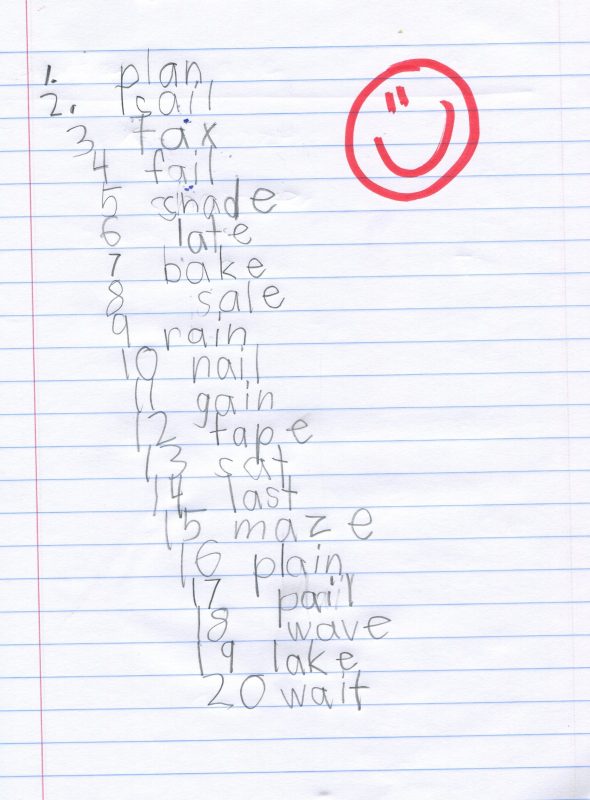 She did great! I’m glad I waited to test her until she really had a grasp of the patterns.  She was confident and didn’t even ask for my help.  A few times she caught her own mistakes and corrected them. If your child appears to have a good grasp of the pattern (0-2 wrong), it’s time to move on.  Choose your next list and get to it!  We’ll be sure to share our next lesson (a-consonant-e, ai, and ay) – so stay tuned!

Get your free word study lesson!

If you’re looking for printable games that you can use with any word list, we highly recommend this collection from This Reading Mama. Many of the games are editable! Purchase below using my affiliate link.