Want to know more about preschool and kindergarten math standards? Let me simplify it for you. 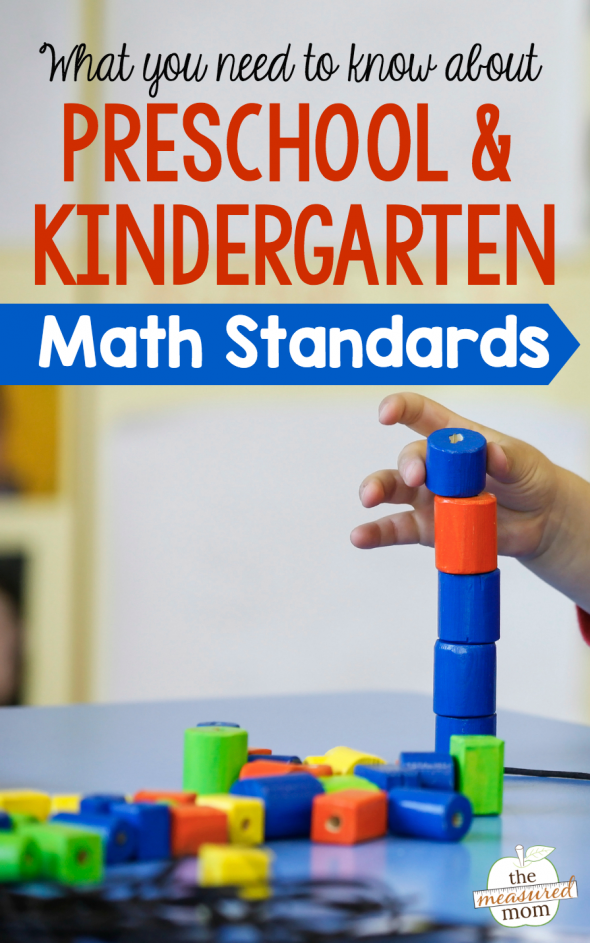 What are standards, anyway?

Standards are broad areas of learning. When we’re talking about math standards, we can look at the five NCTM* content standards. I’ll get to those in a minute.

(*NCTM stands for the National Council of Teachers of Mathematics. It was the first national organization to create national standards in education.)

Do I really need to know this stuff?

If you’re a classroom teacher, your school may or may not require you to align your curriculum with a particular set of standards. If you’re a homeschooler or teacher with your own independent program, you have a lot of freedom in this area.

But whether or not you’re required to know the standards, you should know them. This knowledge will help you identify what your students are currently doing and be more intentional as you prepare future math activities.

Yes. And here’s the good news.

“Mathematics standards align well with a rich, play-based curriculum that is planned and implemented by reflective, knowledgeable teachers.” (More Than Counting, by Sally Moomaw & Brenda Hieronymus).

So what are the math standards for preschool and kindergarten?

Great question. Let’s look at the five NCTM content standards. Most states base their standards on the NCTM model.

Number and Operations is the most important content standard for early childhood. It’s what we tend to focus on the most.

Children move through three states of quantification. (Quantification is just a fancy word for determining “how many.”)

As children learn to count, they learn important counting principles.

Did you know that children do all four math operations in preschool and kindergarten? It just looks a little different.

Well, we can skip this one right? Whew! Because algebra is just for big kids.

It’s crucial that we build the foundations of algebra in preschool and kindergarten. It will help children understand sophisticated algebra in later years.

Here are the foundations of algebra. The good news is that they’re fun and simple to teach!

When children learn to measure, they…

If you’re doing large class graphs with your students, you’re on the right track. Graph how they get to school, favorite types of apples, or whether or not they have a pet.