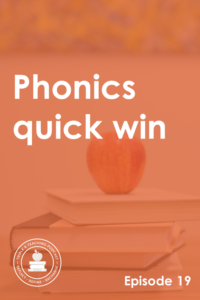 In today’s quick win episode, we’ll walk through an explicit, multisensory method for introducing a new letter with its sound.

Today in our Quick Win Series, we're going to talk phonics, and we're going to look at a very structured way of introducing a new letter and its sound.

This is really very much based on the Orton-Gillingham method. It's just one way of doing it, but I'm going to walk you through the steps, and these steps are from the amazing book, "Multisensory Teaching of Basic Language Skills." It is huge and it's incredible. It has chapters about all the big, important topics we need to know about when teaching reading, and it's constantly backing up things with studies in parentheses, so it's a great book for learning more about the science of reading!

I'm going to be referring to their steps for introducing a new letter. This approach is more of an explicit AND discovery method kind of at the same time, so this is how it would work.

First, you would read five or six words that contain the new letter sound. Let's say the sound is /f/. I could say, "Listen to these words. Fish, foot, fan, fill, fast."

Then, each time you say the word students repeat it and they're listening for the sound that's the same in all the words. When you identify that the sound is /f/, together you can say that each word begins with /f/ and they look in a mirror and they repeat the sound and look at what their mouth is doing. Is their mouth open? Is it closed? Is their tongue on their teeth? What is their mouth doing?

Then they can place their fingers on their throat, which works for some students. If they can't feel whether it's voiced or unvoiced by putting their fingers on their throat, they can't feel that little buzz, then they can actually cover their ears and say the sound and that will show them whether the sound is voiced or unvoiced, or you could call it noisy or quiet.

Then they think about whether the new sound is a vowel or consonant sound. A vowel sound is open, you can sing it, but a consonant sound is blocked or partially blocked, so help them identify that.

Then you should show them the new key word for the sound. If you want to make this more of a discovery, you could have them listen to a riddle, which has the answer of the key word, or you can have the object in a container and they maybe have to feel it and guess what it is, or you can just tell them, which is the more explicit way of doing it but either way is fine.

If you're using a sound wall, of course, these things will be pictured on the sound wall. You will have a card with the mouth making the formation of the new sound as well as the key picture.

Then the teacher can write all those words that she mentioned at the beginning on the board and you can look closely with your students at that first letter, the letter F, and you show them a card with the new letter on it. You might have a procedure where they name the letter, say the key word, and then give the sound. For example, it might be F, fish, /f/, and then that would go on a card deck so in the future they would review that with all their other sounds.

The teacher will name the new letter, then write a large model of the letter on the board, and then demonstrate sky-writing and also show those strokes. It's really important that you teach students the proper strokes from the beginning. The students stand, they sky-write the letter, naming it before they write, so F, and then they form it.

Then the teacher can distribute papers with a large model of the new letter. They can trace that model with their pointer finger three times, and then they can trace it three times with a pencil, and each time they're doing it they name the letter or you could have them name the sound or both, F, /f/.

You can see this is quite a process but, in doing this, students are learning the letter name, they're working on its sound, they're becoming familiar with the shape of the letter and the feel of the sound in their throat, in their mouth.

This multisensory teaching reinforces discovering information and builds associations in memory, according to the book, "Multisensory Teaching."

That was our quick win for phonics this week, it was a procedure for introducing a new letter. You can find the show notes for this episode at themeasuredmom.com/episode19. See you next time!