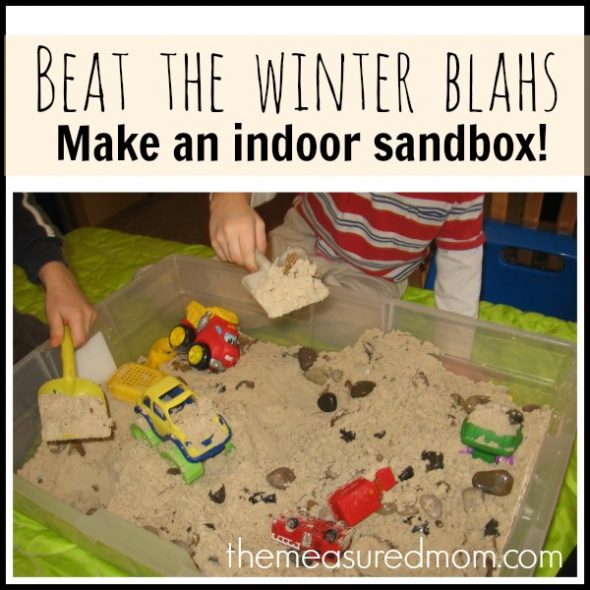 It’s the middle of March.  We still have a fair amount of snow, and we’re not excited about it anymore.  (Well, I never was.)   Do you know what temperature we’re expecting on the first day of spring?  19º F.  And that’s the high temperature.  We definitely need to beat the winter blahs.

Today was one of those days that makes a person impatient for bare feet on green grass.  As the rain poured down, it melted the ice under the snow.  My snow boots made a loud sploosh as they sank through the melting snow to the giant puddle beneath.

I was prying the lid off our forlorn sandbox and giving the kids their first sandbox play since last fall.

I know it’s a cliché, but desperate times call for desperate measures. 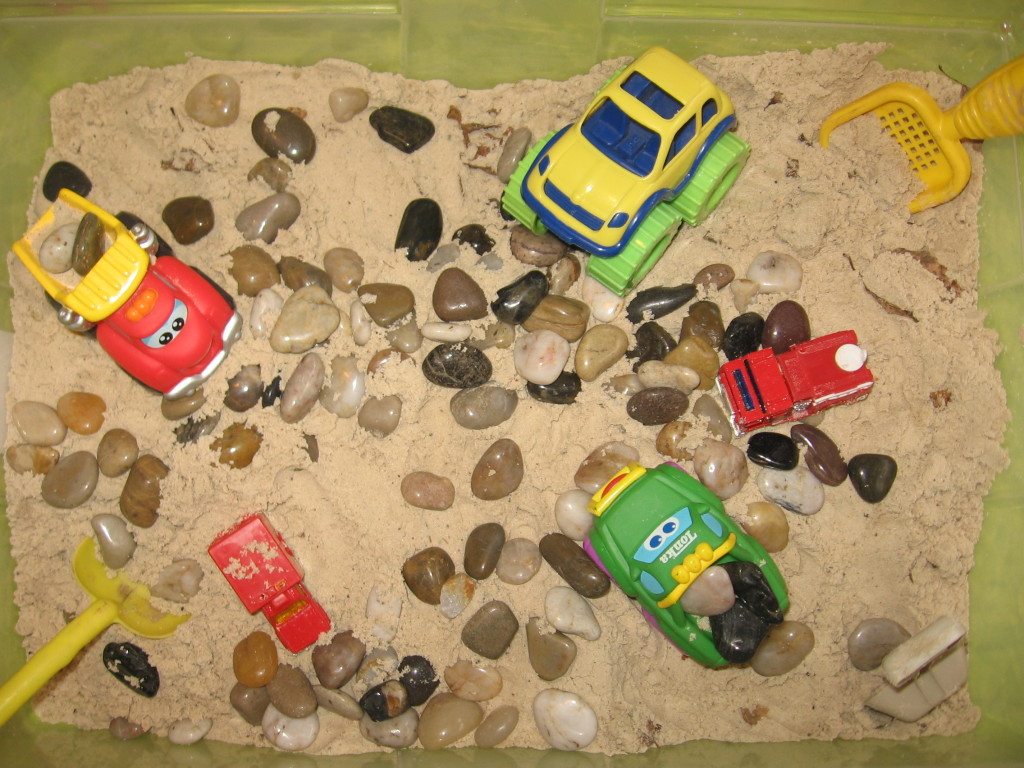 I dumped a fair amount of sand into a large plastic  bin, threw in some polished river rocks we bought at Michael’s (under $3 on sale) and all the toy trucks we could find.  We’re exploring the letter T around here. 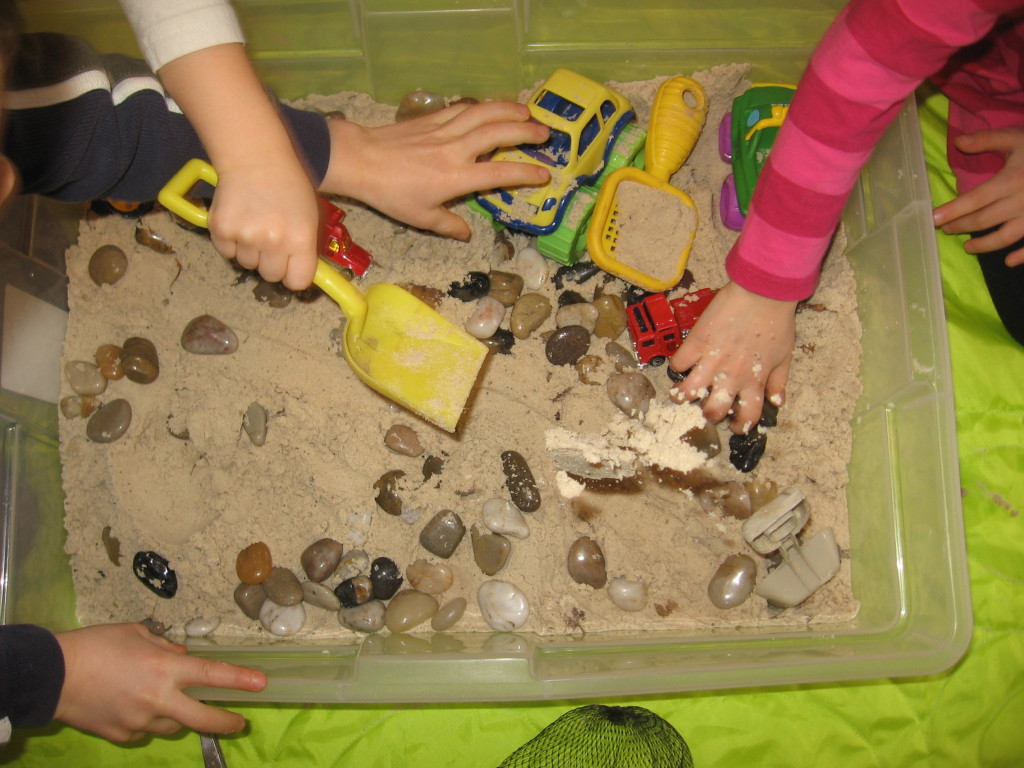 The kids (4,2,5) all dug in eagerly, but within a few minutes my Five was done.  She escaped to the couch and her books. 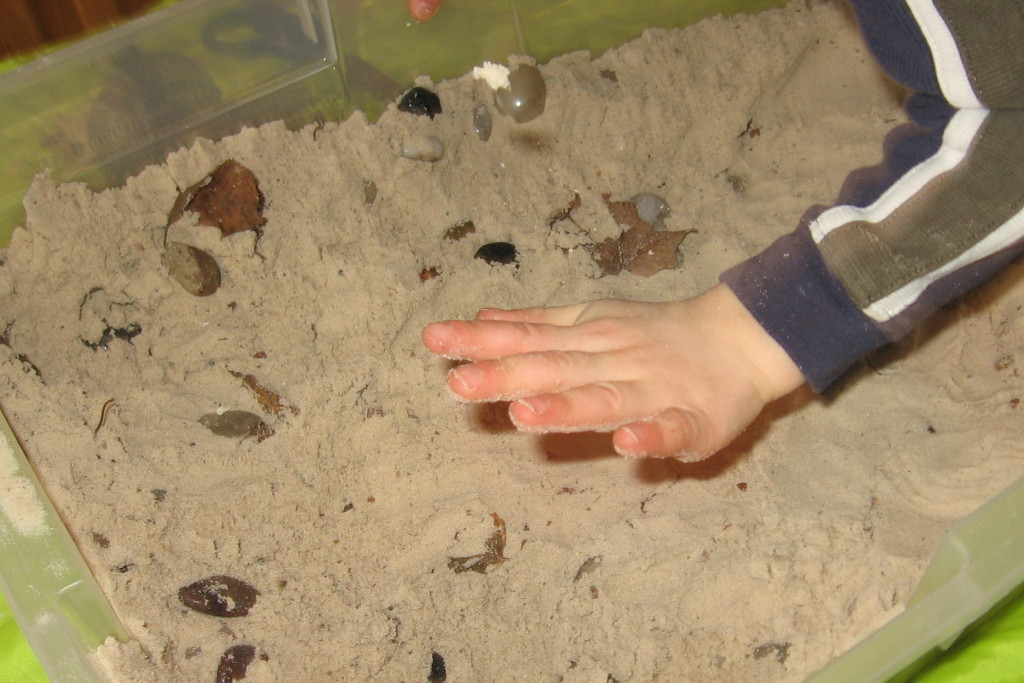 The boys, on the other hand, had lots of ideas.  They just weren’t the same ideas.  My Four wanted to pat it down and make tire tracks. 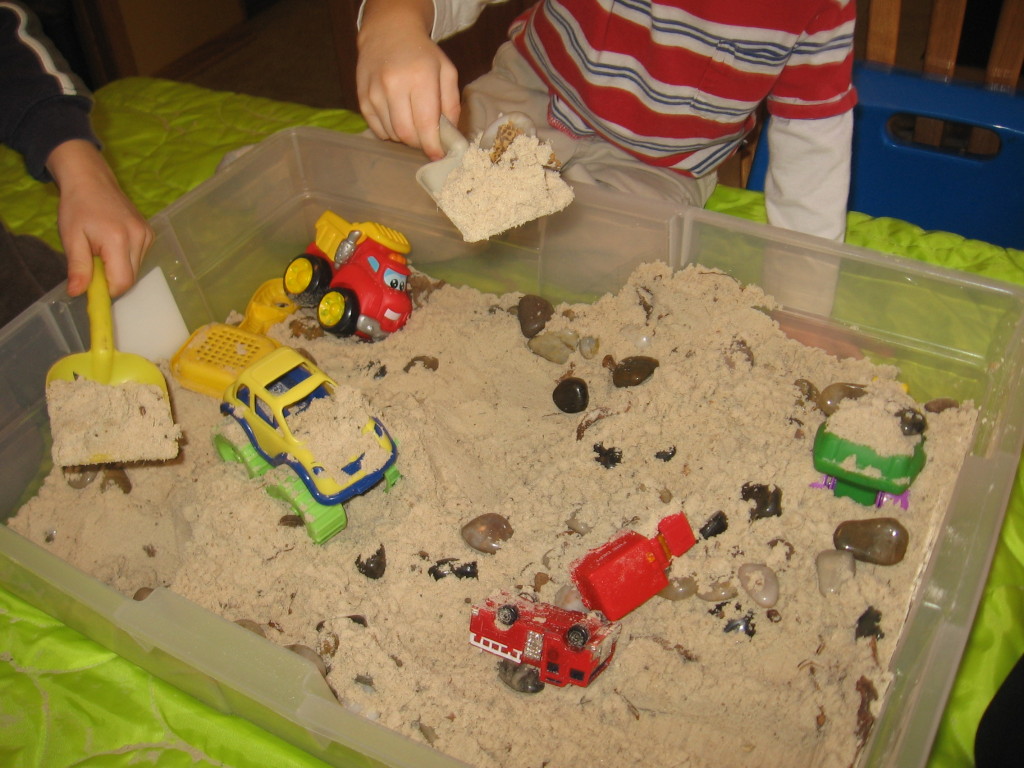 My Two just wanted to dig, which he could not do in a tiny sandbox with a brother who wanted a smooth surface. 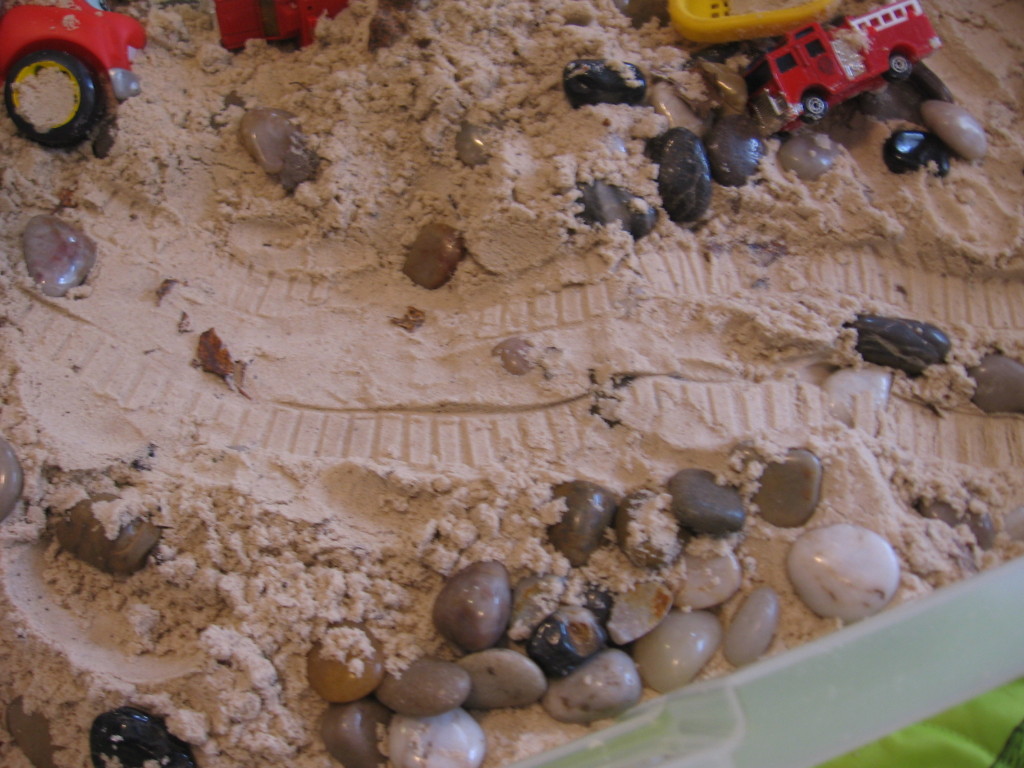 So my Four had his turn first… he could make tire tracks to his heart’s content. 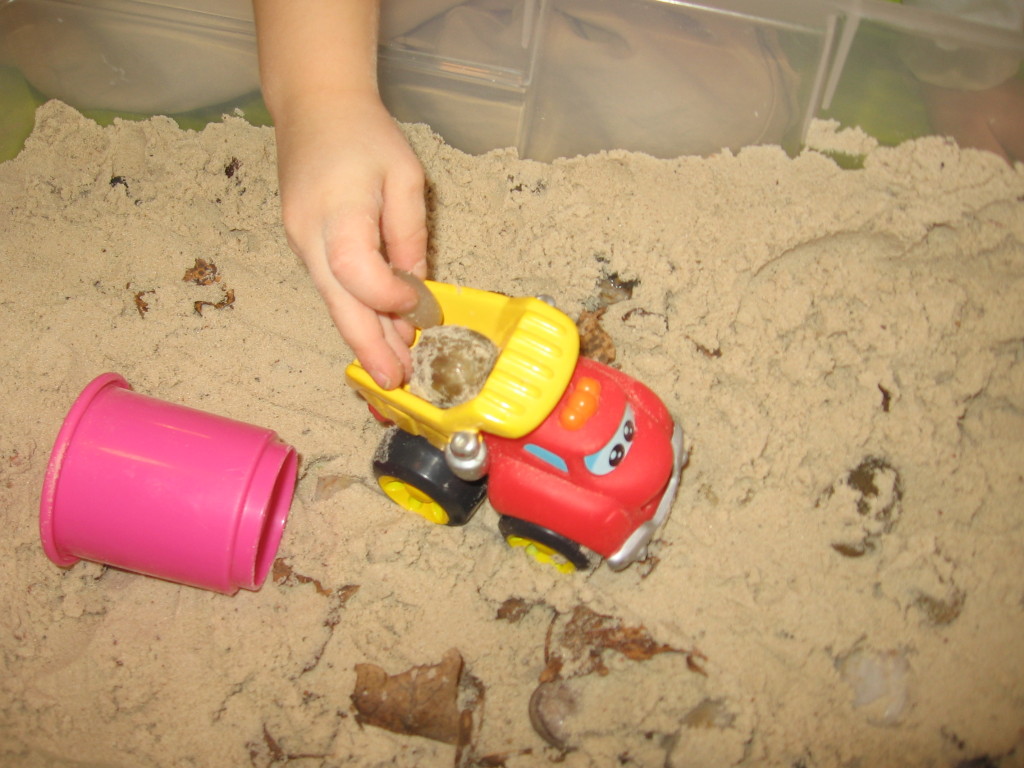 Soon afterward, my Two could “deliver rocks” from one end of the bin to the other. 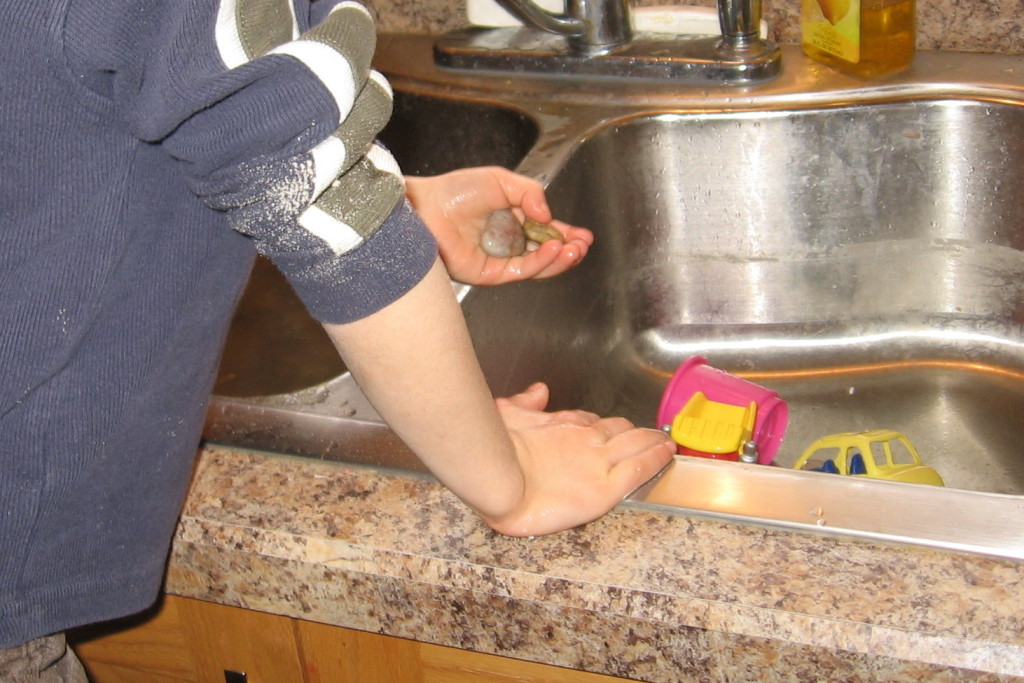 Afterward, my Four washed all the rocks and trucks for me. This was definitely his favorite part.

I cleared the sand from the table top.
And the chairs.
And the floor.

Last minute Christmas decorations (that your kids can make!) Easy Baked Macaroni and Cheese Rhymes for Letter X: Little Letter X Book
Hands-on Math for Preschool: The Letter “I”
A Mommy & Me play idea for baby — power magnets on a baking sheet