Did you know that we collect math ideas for each letter of the alphabet?  Some are simple — it was fun to create transportation printables for the letter T.  But the letter Y… what were we going to do, count yaks?

Thankfully I realized that yarn can be a great math manipulative — for measuring, of course.  So today I’m sharing a few ways to teach measurement to kids using yarn. 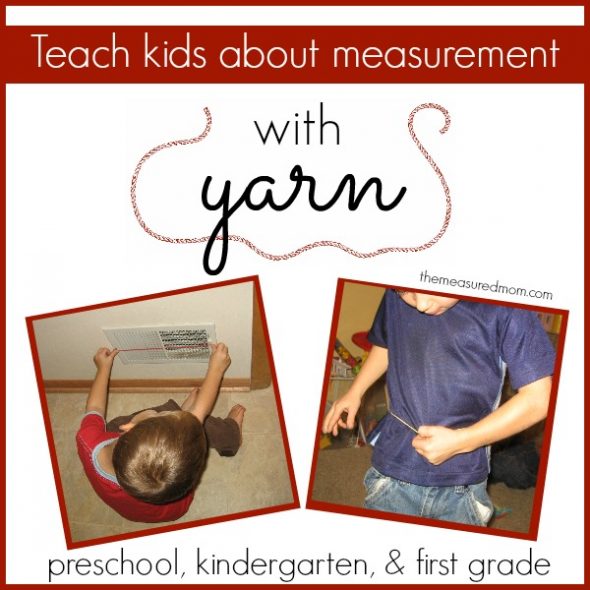 I decided to do this lesson after my daughter’s day at first grade so that she could participate too.  The activities I’ll share can be used with preschoolers, kindergartners, and first graders — depending on the ability and interest level of the kids.

For the sake of my Three, we started out very simply.  I cut out lengths of yarn in five separate colors and gave each of my kids this piece of paper with colored bars.  Their job was to line up each piece of yarn along the edge.  Then we talked about which was longest, shortest, second longest, etc.

Next, I gave each of my kids a length of yarn (in their favorite colors, of course).  We moved around the house and I pointed out different toys, furniture, and household objects.  “Do you think your yarn is shorter or longer than this vent?”    My Three was pleased to discover that his string was almost the exact same length.

“My yarn is shorter than the couch.”

“The piano is longer than my piece of yarn.”

Next, the kids cut lengths of yarn to compare our bodies.  My Five measured his waist.

Then he measured my waist.  After cutting lengths of yarn for every member of the family, including my husband, we laid them out on the floor.  My Five announced, “Mommy’s the winner!”  Yes. I win.  At least I have an excuse (until mid-January).

After doing a lot of work with nonstandard measurement, it was time to introduce inches, feet, and yards.  I cut a length of yarn to represent each. 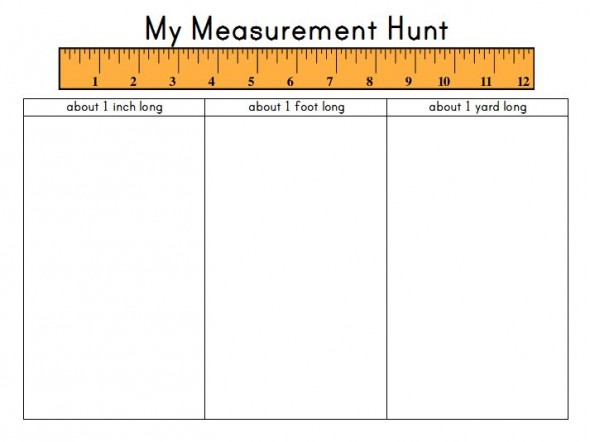 Next, I gave my Six the inch-long piece of yarn, my Three the foot-long piece, and my Five the yard-long piece.  By this time my Three had tired of the lesson and moved on to other things. His older siblings, however, hunted for objects that matched their lengths.

Among other things, my Five discovered that the bottom of our refrigerator is about one yard tall.

His sister found items in the craft closet that measured one inch in length.

Our drawers are a foot wide.  So are our kitchen chairs.

After a day at school, my Six was ready to go read her books – so just her younger brother (not yet in kindergarten) completed this measurement worksheet with me at his side.  He learned to line up the ruler at the end and read the number which matched up with the other end of the rectangle.

My Three was eager to do a page himself.  I printed  a page for him, which he enjoyed – but it was not something he could have completed on his own.  He never quite caught on how to line up the ruler and how to find the number which shows the length.  No worries – he’s three!

Members of The Measured Mom Plus get access to even more printables, in addition to quick video trainings and no-print resources. Join thousands of happy educators!

Get your free yarn measurement pages!