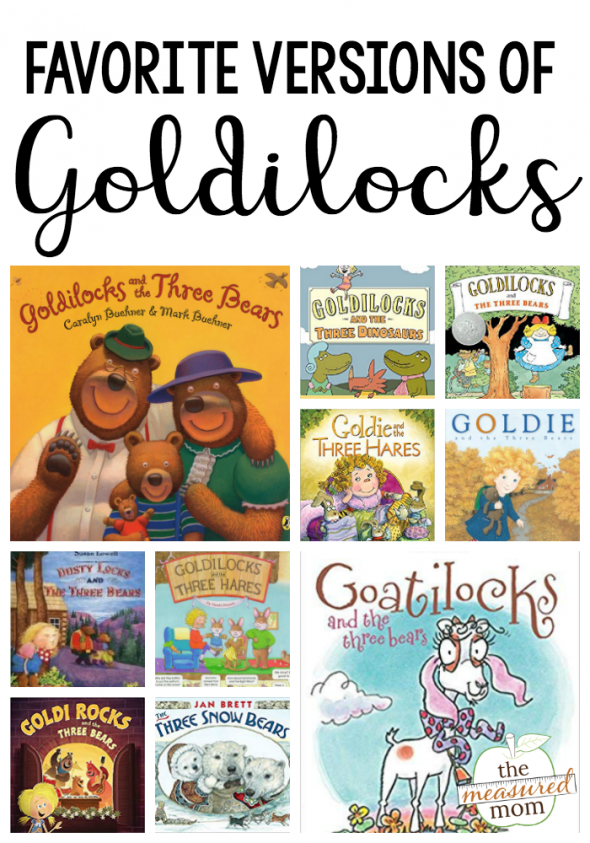 It’s so much fun to explore different versions of familiar tales! They’re also great for building the skills of comparing/contrasting. We’ve shared a variety of collections featuring familiar tales in our book lists. 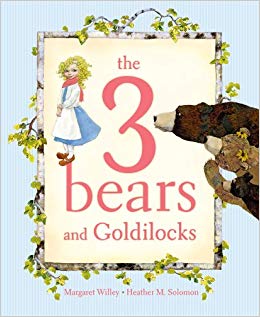 The 3 Bears and Goldilocks, by Margaret Willey

If you’d like a new perspective on the traditional story, this is a good one to check out. When Goldilocks finds the bears’ home, there’s no tidy cottage. Instead, the bears live in a dirty cabin (with leaves and fish bones on the floor), eat porridge filled with beetles and bark, and sleep in beds made of leaves, pine needles, and bird feathers. While the story didn’t especially grab us, it’s a fun new take. The illustrations are great, too. 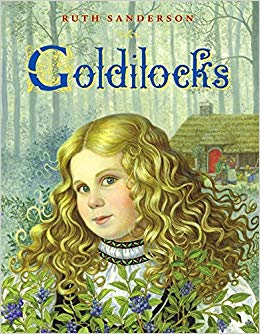 This is a beautiful book with a fresh ending to the traditional story. While picking blueberries, Goldilocks stumbles on the three bears’ home. “Forgetting her manners,” she walks right in. The story continues in the traditional way until the bears return home. Instead of running out of the house, Goldilocks makes the beds, mends the chair, and offers her blueberries for a batch of blueberry muffins. A cozy, heartwarming book. 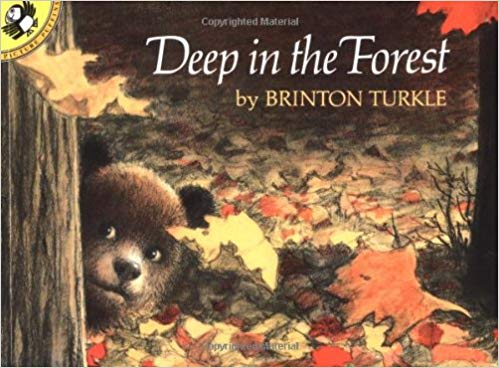 Deep in the Forest, by Brinton Turkle

This is a wordless picture book in which a baby bear stumbles upon a log cabin. I like the setting (the American frontier days) and the expressive illustrations. Challenge your students to help you write the text! 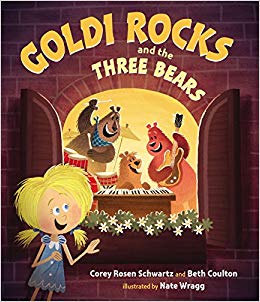 Goldi Rocks and the Three Bears, by Corey Rosen Schwartz and Beth Coulton

In this modern version, the Three Bears are looking for a lead singer for their rock band. They audition everyone (including the three little pigs and Little Red Riding Hood), but no one has the right pitch. Meanwhile, Goldilocks discovers their empty house. She breaks the microphone, finds the perfect headset, and falls asleep (drooling) on the keyboard.  When the bears discover her, she lets out a scream (a perfect high C!) and becomes the new lead singer. I loved it; my Four wasn’t impressed. 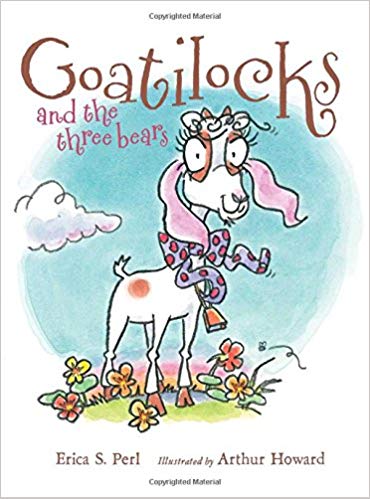 Goatilocks and the Three Bears, by Erica S. Perl

This book gets the prize for funniest story and cutest illustrations. Goatilocks is a little kid (get it? ha ha) who lives down the road from a family of bears. The silly twist is that she eats the things she finds … including the littlest bear’s bowl and spoon, his chair, and his bed (plus the blanket, two pillows, and a pair of pajamas). It’s a fun book with just the right amount of text. Recommended for sure! 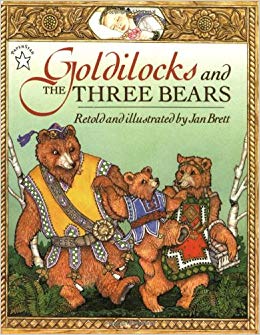 Goldilocks and the Three Bears, by Jan Brett

Honestly, the text in this book is too familiar. Brett adds nothing to the familiar story. But her illustrations are truly a work of art. If you have a listener who loves studying  elaborate illustrations, this is the book for you. If you are looking for a new twist, skip it. 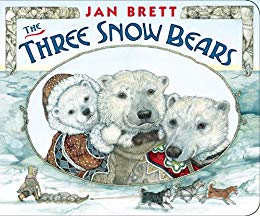 I like this twist on the familiar story, as the three bears live in an Igloo, and it’s an Inuit girl named Aloo-ki who discovers their home. Brett’s books can be a bit too text-heavy, but this one is just right (get it? ha ha). 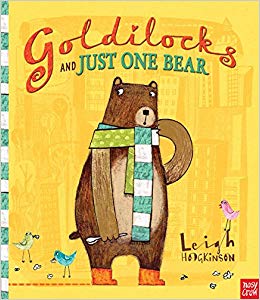 Goldilocks and Just One Bear, by Leigh Hodgkinson

This one has an interesting twist.  At the beginning of the book we meet a large bear lost in the city. When he finds himself in a posh high rise apartment, he tries the food, chairs, and bed … only to discover that the golden-haired mistress of the house is someone he’s met before! 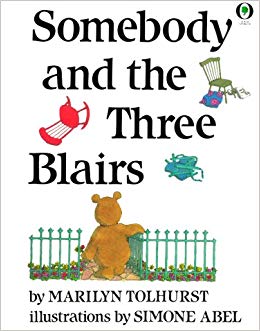 Somebody and the Three Blairs, by Marilyn Tolhurst

Somebody is a little bear who explores the home of the three Blairs (Papa Blair, Mama Blair, and Baby Blair). The story is funny, the illustrations are adorable, and Baby Bear’s comments are hilarious. A favorite for sure! 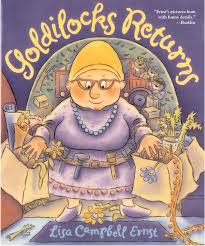 Goldilocks is all grown up, regrets what she did as a girl, and has created a business selling locks and keys. She returns to the Bears’ house, anxious to make amends – but it turns out she hasn’t learned her lesson after all.  Without the Bears’ permission, Goldilocks adds multiple padlocks to their door, replaces the porridge with “better” food (rutabaga bars and celery juice) and adds her own decorative touch.  Silly Goldilocks! 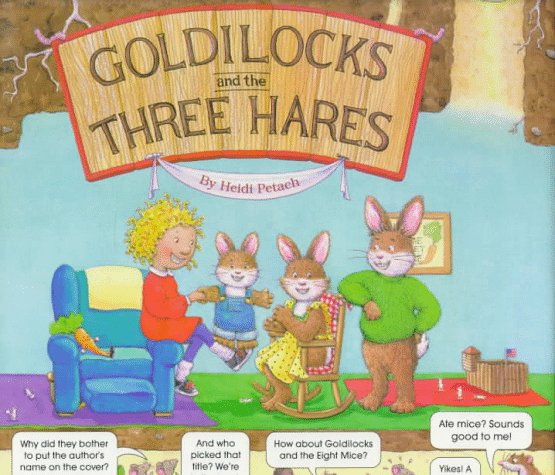 Goldilocks and the Three Hares, by Heidi Petach

This is an absolutely hilarious book with lots of puns, great illustrations and irresistible speech bubbles. The book does get long when you read it over and over (as my Four requested), but I didn’t really mind until about the fifth time. 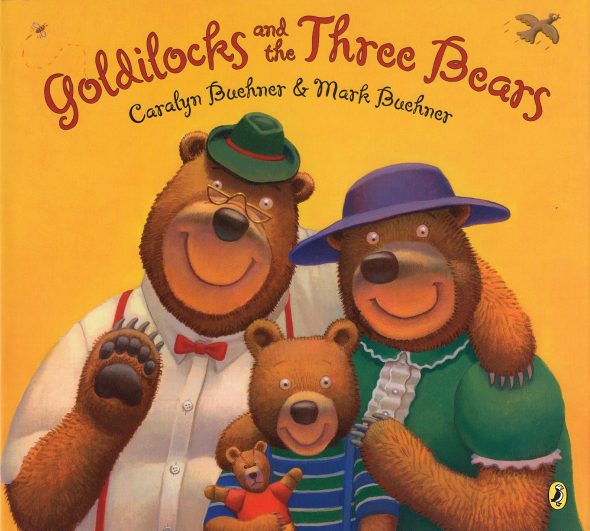 Goldilocks and the Three Bears, by Caralyn Buehner and Mark Buehner

The pictures steal the show in this book in this fantastic book by a husband and wife team (the parents of nine kids!). The expressions on the characters are priceless – I laughed every time I read it (and my Two requested it a lot). Even though this is very much based on the familiar tale, the Buehners add their own spin. Don’t miss it! 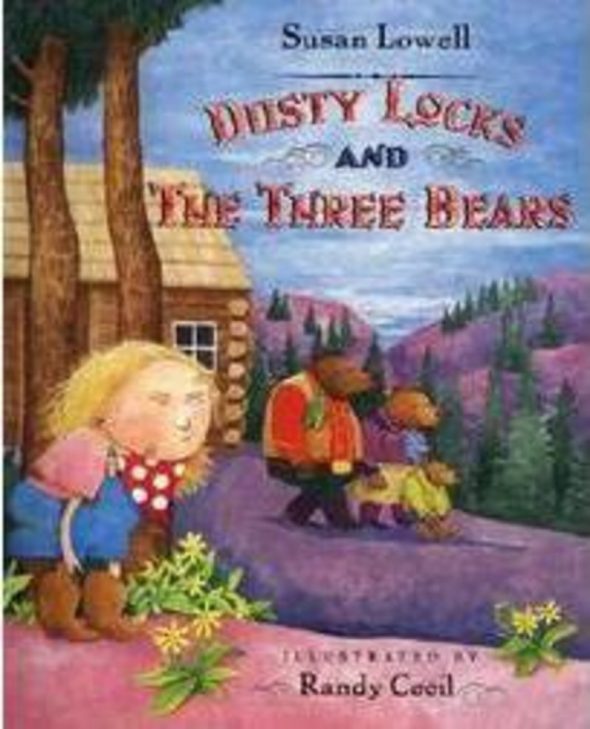 Dusty Locks and the Three Bears, by Susan Lowell

This is a fun, highly recommended variation. The southwest tale is about a girl who’s so dirty and unkempt that she’s called Dusty Locks. The best part is the hilarious dialogue ..  “Ya-hoo! I’m so hungry I could eat a saddle blanket.”

“She had no more manners than a pig in a peach orchard.”

“Papa Bear was madder than a half-squashed hornet.”

And when the bears find the dirty Dusty Locks in Baby Bear’s bed … “Land sakes! Smells pretty whiffy in here.”

Fun to read aloud, and fun to listen to! 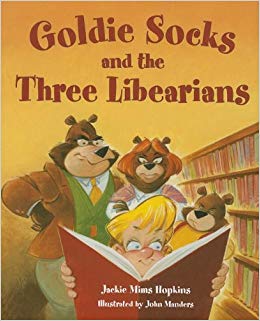 Goldie Socks and the Three Libearians, by Jackie Mims Hopkins

In this super fun version, Goldie Socks finds a house made entirely of books – because it’s the home of the three libearians, of course! I love how she chooses a book to read that’s just right (using the five finger method, ha ha) looks for a place to read it, and ends up snuggled up in Little Bear’s reading tent.   Just an all around great book that all of us loved. 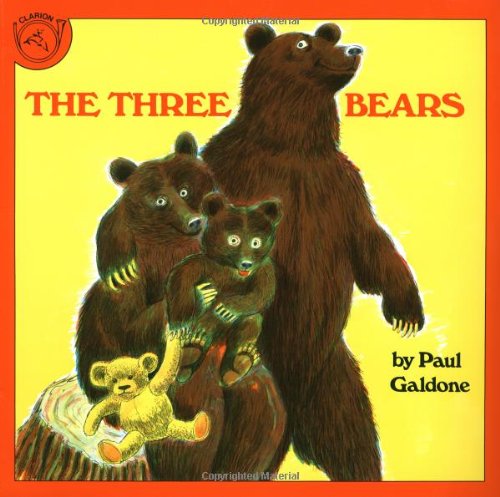 The Three Bears, by Paul Galdone

I always recommend getting a vintage version, and this is the Three Bears version I love most. Published in 1972, it’s the original story with all of Paul Galdone’s simple charm. 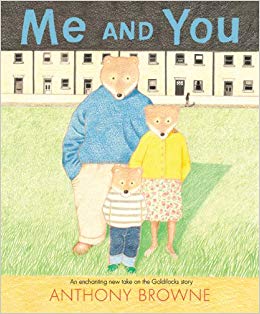 Me and You, by Anthony Browne

This is a completely new and modern take which tells two stories at the same time. The bear family is out for a walk in the city, and a little girl gets lost while on an errand with her mother. This book is great for teaching students to make predictions and inferences, but the pictures can be hard to see if you’re reading to a large group. 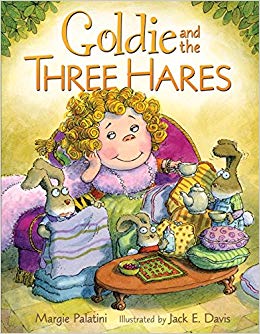 Goldie and the Three Hares, by Margie Palatini

In this fractured fairy tale, Goldie stumbles into the three hares’ hole while running from the three bears. And she’s a very demanding houseguest! 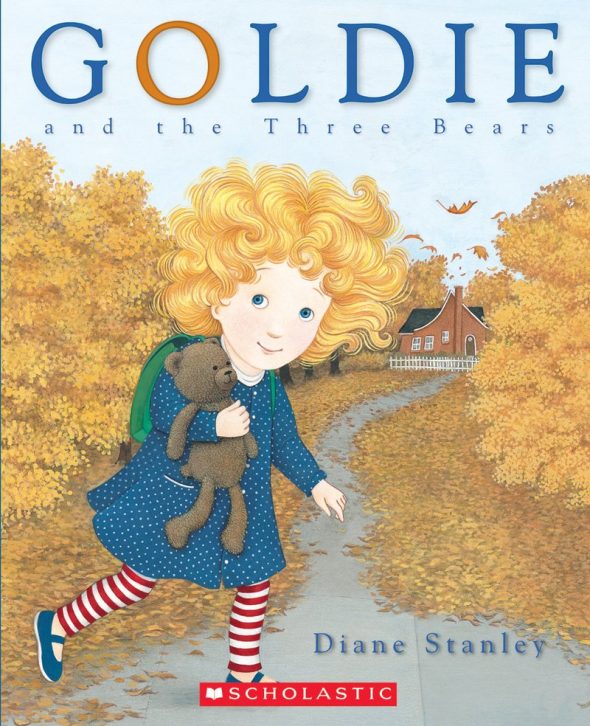 Goldie and the Three Bears, by Diane Stanley

In this book, Goldie is a sweet but particular little girl who knows exactly what she likes.  “I want plain pasta with just butter and no green things please.”  When the school bus drops off Goldie at the wrong stop, she looks for a place to call her mom.  Which brings her to the bears’ house.  It turns out that Baby Bear is the perfect playmate for Goldie.   The ending was a little weird for me (she calls her mom, who lets her stay for dinner at the bears’ house without having met them), but my Three loved it.  Sweet story. 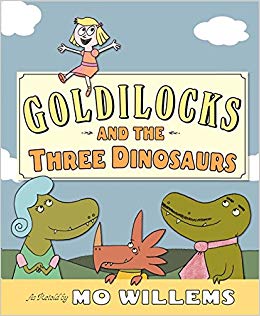 Goldilocks and the Three Dinosaurs, by Mo Willems

This is another fun book from the creator of the Pigeon series and the Elephant and Piggy books.  Not only do kids love this one, but you’ll appreciate all the little jokes thrown in.  When the dinosaurs set a trap of three giant bowls of chocolate pudding, “a poorly supervised little girl named Goldilocks came along.”   Goldilocks is clueless that she has just fallen into a trap until she hears the dinosaurs talking about their catch.  “Goldilocks took a minute to stop and think, which was longer than she was used to stopping and thinking.” 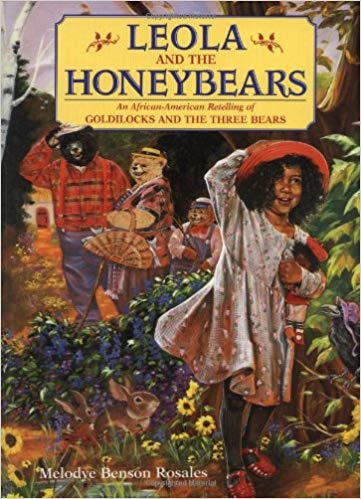 Leola and the Honeybears, by Melodye Benson Rosales

Leola wanders from her Grandmama’s cottage, surprises the Honeybear family, and learns a few lessons about manners. The text has a lovely southern flair, and the illustrations are bright and vibrant.

Both my Four and I enjoyed this African American retelling. 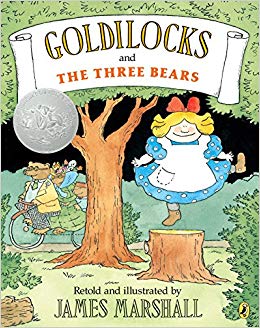 Goldilocks and the Three Bears, by James Marshall

We never tire of the fairy tale adaptations by James Marshall.  This is a special favorite because the main character is so unlike the Goldilocks we’ve met in other versions.  “Goldilocks was one of those naughty little girls who do whatever they please.”  Ignoring warning signs posted all over the trees, Goldilocks takes a short cut right to the bears’ house.  Kids will giggle when she enters their home to find fur everywhere and thinks,  “They must have kitties.”  A book to own!

Have you seen our Reader’s Theater scripts yet?

Build fluency with these familiar tales… including Goldilocks and the Three Bears! 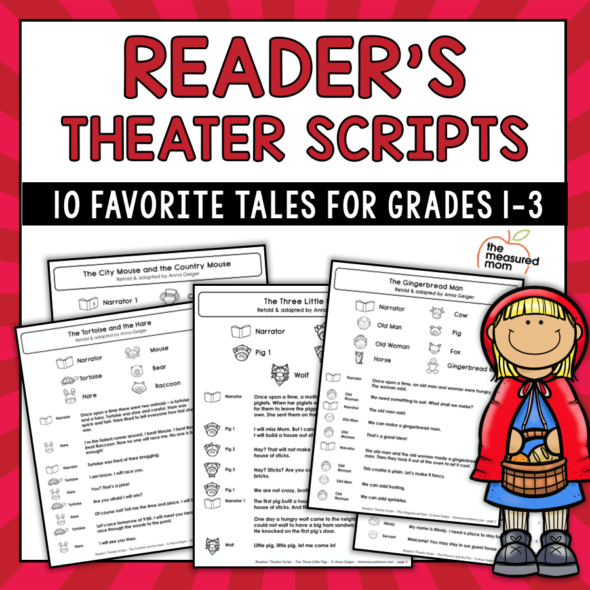