It’s heating up, even in the Midwest — so to go along with letter W, we pulled out some hands-on water math and science! 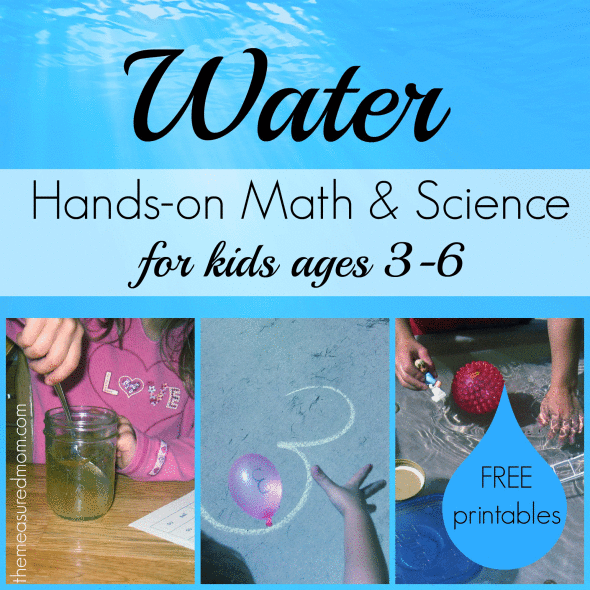 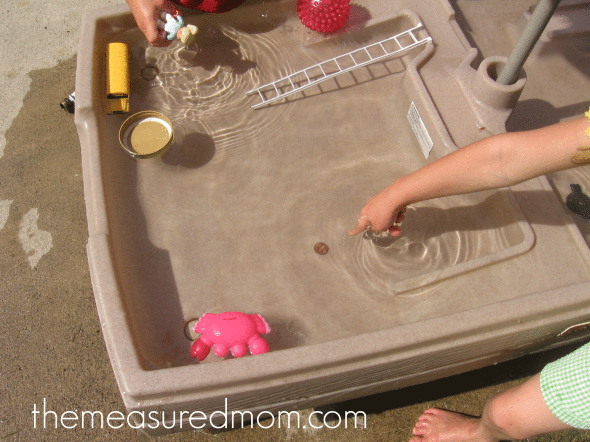 This has got to be one of most common science experiments for little ones – and why not?  They love it.  I asked my Six to gather a bunch of objects that might float or sink.  Since she had done this experiment in kindergarten during the school year, she was very excited.

“I’ll get a penny, Mama! I know they sink.”  She was happy to write the names of each object on our recording sheet.  The kids took turns choosing an object, predicting whether it would sink or float (which my daughter recorded), and then testing their hypothesis. 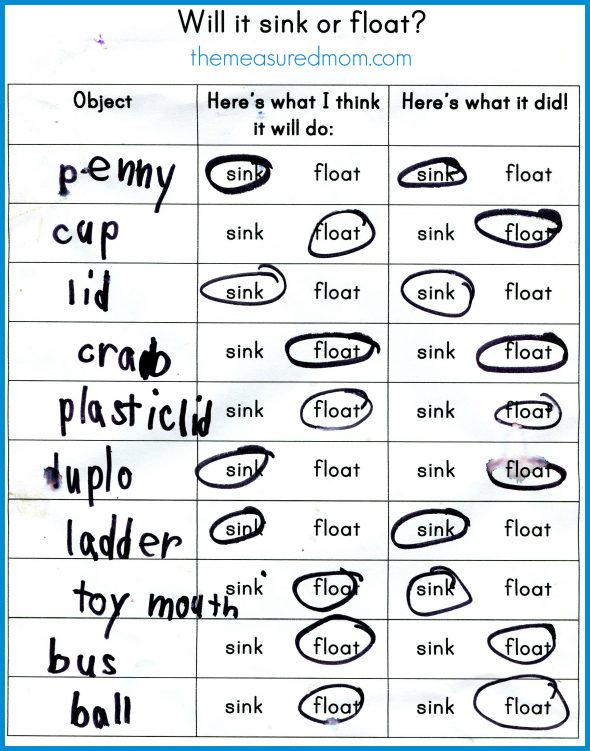 Science:  Will it dissolve in water? 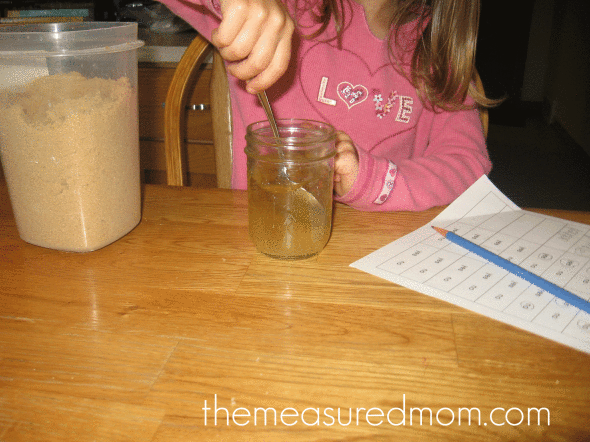 We raided our pantry for items that might dissolve in water, and the kids had a blast testing each substance in a glass jar.  They were fascinated to see that the olive oil actually separated from the water.  And I had to convince them that we don’t need to eat soggy sprinkles.  For a terrific post about this experiment, visit Hands on As We Grow. 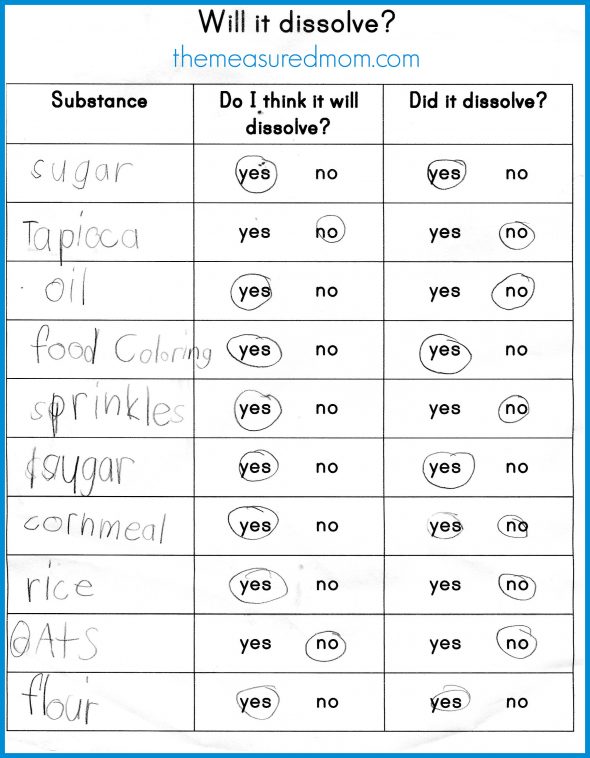 Science:  Will it absorb or repel water? 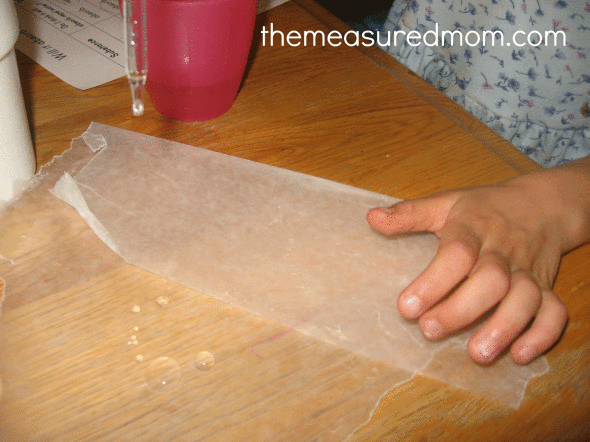 My Six needed some one-on-one time, so while her brothers were playing together (and not fighting – amazing!), we took an eye dropper and a pile of objects that could absorb or repel water.  By the end of the experiment I think she had finally learned not to pronounce it “reppel.” 🙂  You can read more about this fun experiment over at Not Just Cute. 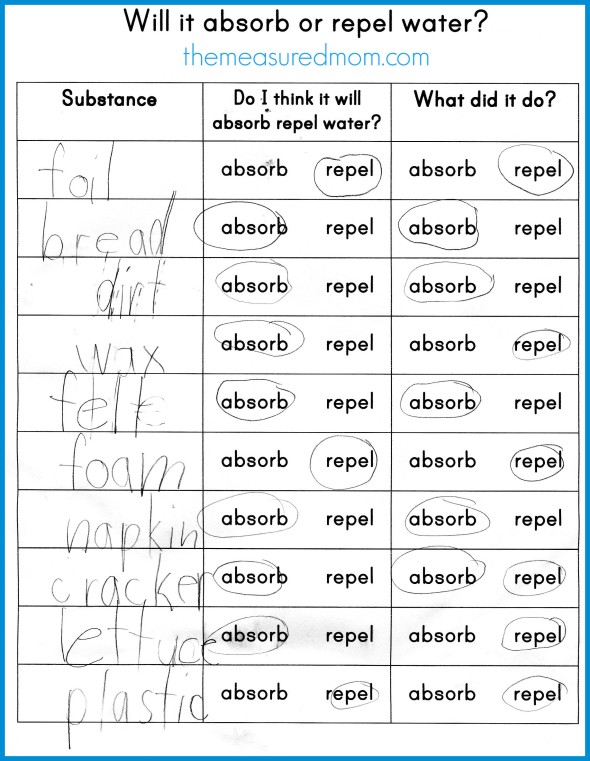 Science: What happens when different objects soak in water? 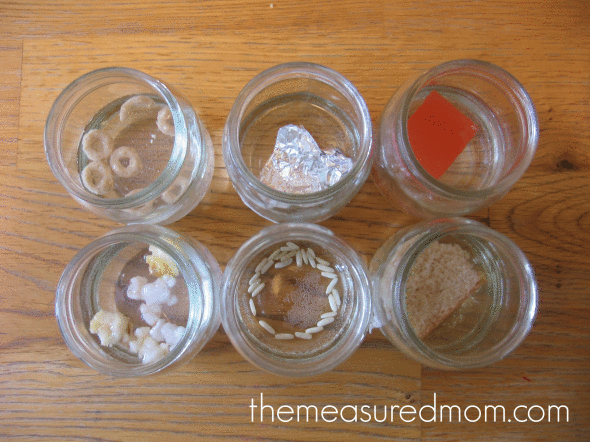 We found items that might change when left to soak in water for a whole day.  My Six drew a picture of each item before and after it soaked.  We were surprised that the construction paper appeared unchanged (besides being wet).  We saw more obvious changes in the bread, Cheerios, and popcorn!  The foil and rice looked exactly the same after a 24-hour soak.  This idea is from Learn Play Imagine’s fantastic collection of water experiments for kids. 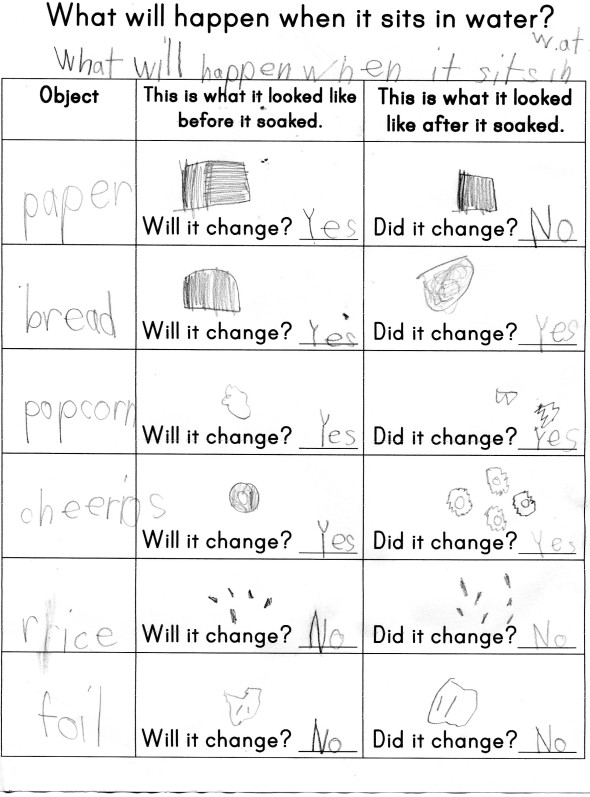 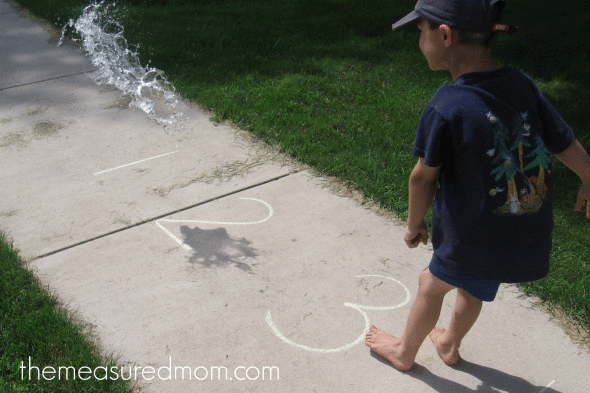 I wrote the numbers 1-10 on our sidewalk.  I handed my Three balloons with a single number on them; he matched them to the sidewalk numbers and slammed them down.  I gave my Four simple addition problems.  My Six wanted harder addition problems and a few subtraction ones, too.  I adapted this idea from one at No Time for Flashcards.

Can water beads count when we’re doing water math?  I love this idea from Little Moments to Embrace, where you can learn how she set this up and find many variations.  I wrote the numbers 1-6 two times in an egg carton (my Three can’t count groups much higher than that), and he counted the water beads to put in each section. 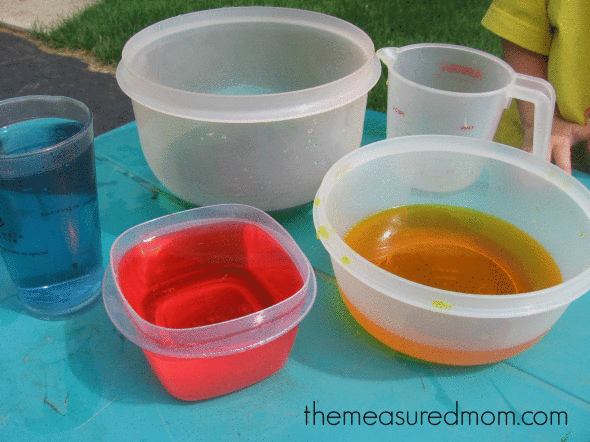 I filled various plastic containers with exactly 2 cups of water each.  Then I brought them outside and let the kids add food coloring to each one (they loved this, of course).  Next I asked them to tell me which container they thought held the most water.  You might have guessed that their top guesses were the cup of blue water and the container of red water – because the water was filled to the top.  We took turns pouring the water into the measuring cup. They were surprised to discover that each container held exactly the same amount.

How could this be?  I taught them the word volume — and together we talked about how a liquid takes the shape of its container.  Two containers can hold the same amount of liquid – but it looks different depending on how wide or tall the container is.  I think my Six was the only one who soaked up this information!

Get your free water experiment pages!