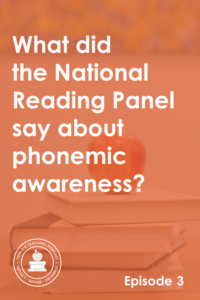 TRT Podcast#3: What did the National Reading Panel say about phonemic awareness?

What does the research have to say about phonemic awareness? In today’s episode we’ll look closely at what the NRP learned through its meta-analysis.

Listen to the full episode

It seems that whenever we're looking for a new program or resource, we find the magic words "research-based." It's kind of like the "All Natural" stamp on a box of organic Oreos. Rather than trust what everyone else says is research-based, it's smart to acquaint ourselves with the research itself.

Phonemic awareness is the ability to hear and manipulate individual sounds in words. For example, the word "cat" has three phonemes, /k/, /ă/, /t/. The word "ship" also has three phonemes even though it has four letters, /sh/, /ĭ/, /p/.

There are four phonemic awareness tasks: isolating sounds, blending, segmenting, and manipulating. Manipulating can include substituting, adding, or deleting sounds.

In contrast, phonics refers to how letters and sounds correspond to each other, and how this knowledge could help a person decode words.

This is the key finding of the National Reading Panel and therefore all beginning teachers of reading need to include phonemic awareness in their instruction!

When looking more closely at those studies, here's what else the panel found. Programs that focused on one to two skills yield larger effects on phonemic awareness learning than those that teach two or three skills. Instruction that taught phonemic awareness with letters helped children acquire better phonemic awareness skills than those without letters. Those students also did better with spelling. Teaching in small groups produced larger effect sizes than teaching children individually or in whole groups. Also good to know, low SES (socioeconomic status) children can benefit as much from training in phonemic awareness as middle to high SES children, despite being phonologically or culturally different.

I'd like to highlight an important note from this report. "It is important to note that acquiring phonemic awareness is a means rather than an end. Phonemic awareness is not acquired for its own sake, but rather for its value in helping children understand and use the alphabetic system to read and write. This is why including letters in the process of teaching children to manipulate phonemes is important."

A lot of times we hear that phonemic awareness is only that which can be done in the dark, that it doesn't include any print, but phonemic awareness can and often should include print so that children can make the connection to the alphabetic principle.

These are all points of debate in the science of reading community and they won't be settled until a robust body of evidence has been established. For now, keep in mind this summary from Timothy Shanahan referenced in the show notes: "Beginning readers benefit from instruction that teaches them to hear the sounds within words. This instruction prepares them for making the link between letters and sounds and should be kept simple, brief, and enjoyable. Phonemic awareness is taught through language, songs, games, and other activities that encourage students to listen for the sounds within words. Students will have successfully accomplished learning phonemic awareness when they can fully segment words with ease. For most children, this can be accomplished during kindergarten or first grade."

I'll be sure to share Shanahan's article, as well as the National Reading Panel report, and a link to an excellent phonemic awareness curriculum that incorporates letters called Road To The Code. You can find the show notes at themeasuredmom.com/episode3.